Hot sports take: Fire the owners and nationalize all sports!

Full communism is the only solution to dumb owners 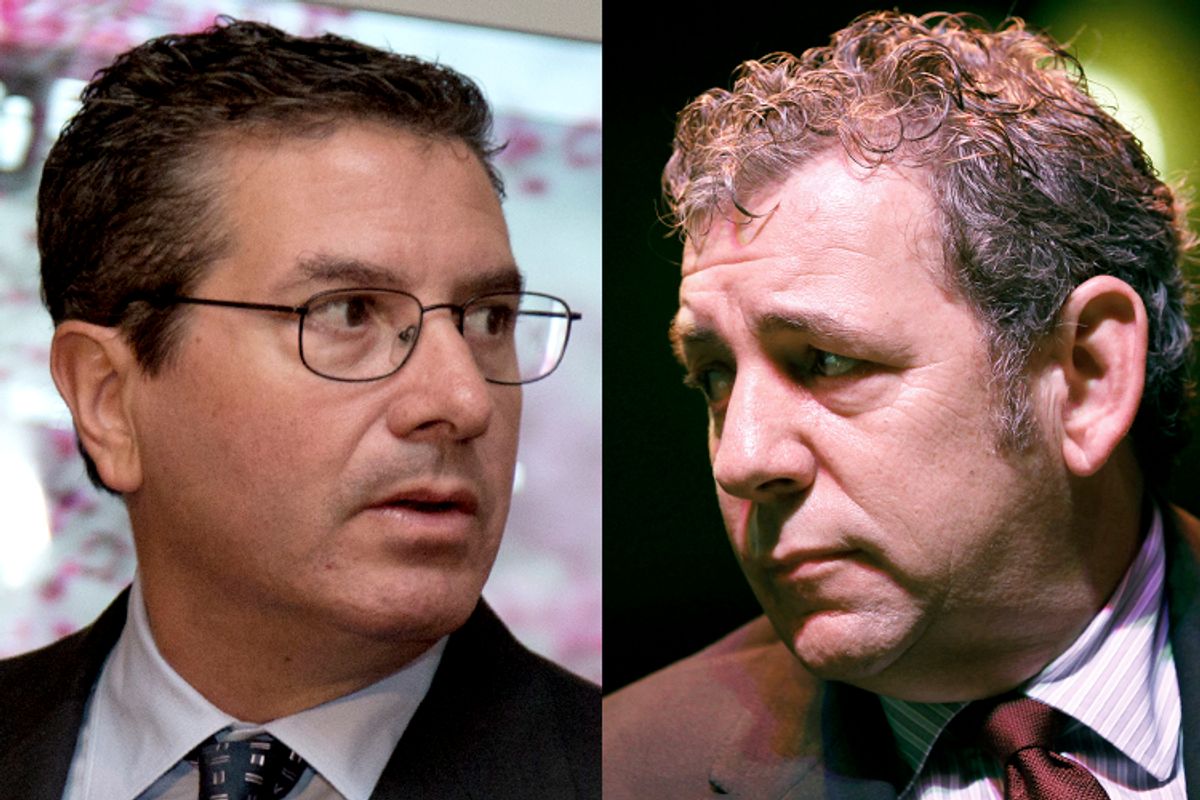 This past Monday, Washington DC's NFL franchise fired its head coach, Mike Shanahan, after a season that fell somewhere between disappointment and disaster. The move was widely expected, and probably deserved. Shanahan is a Super Bowl-winning coach, and he commands a lot of respect in the football world, but he simply couldn't manage the team's biggest, most colorful, most difficult personality. By which I obviously mean its owner, Daniel Snyder. You know, this guy.

One of the most interesting off-season debates in the NFL right now is which vacant coaching job is the least desirable. Strong cases can be made for Cleveland, Washington, Detroit and Minnesota, meaning all the cities in which there is still an opening to filled. Those organizations aren't undesirable because of climate or cost-of-living or unattractive team colors or mean fans -- they're all potential minefields solely because of their owners. In a better sports world, the 2013 NFL season would've concluded with the cities of Cleveland, Washington, Detroit and Minneapolis firing Jimmy Haslam, Dan Snyder, Bill Ford, Jr. and Zygi Wilf.

This is how bad America's Sports Team Owner problem is: Snyder might not even be the worst owner in American pro sports. James Dolan has been failing at a high level for an even longer period as owner of the NBA's New York Knicks. Baseball's Jeffrey Loria scammed the city of Miami into building him a new stadium and then slashed the payroll. Donald Sterling, owner of the Los Angeles Clippers, is a slumlord and an outright racist.

In fact, its much more difficult to find examples of beloved and respected owners in each of America's major leagues than it is to find ones who are widely and rightfully reviled by their teams fanbases, often for decades after they sell, move or die. (Hello, Jim Irsay, Marge Schott, Art Modell, Walter O'Malley, Norm Green, and Howard Schultz.)

Owners are the worst thing about professional sports. Professional sports team owners, like most of the modern global mega-rich, tend to exhibit most or all of the following traits: General cluelessness about matters unrelated to the immediate field in which they made their fortune; unjustified faith, despite that cluelessness, in their own abilities and intelligence; the related belief that their expertise in money hoarding translates to expertise in all other fields of human endeavor; staggering greed and attendant unscrupulousness. There is no modern football owner who started a team himself and built it into a powerhouse, along the lines of the usual mythic entrepreneurial success story. These are men who made a lot of money and then bought a hobby. They know no more than your typical involved fan. The result is a man like Zygi Wilf, a crooked real estate mogul who seems to have purchased the Minnesota Vikings as part of a scheme to have the city of Minneapolis build him a world-class stadium on their dime. (This depressing story by former Vikings punter Chris Kluwe contains perhaps the only nice thing I've ever read about Mr. Wilf.)

And most of these men try their hardest to convince the average fan that it's the players -- you know, the people who actually make up the teams that play the sport -- that are overpaid, in an industry in which various people "win" Super Bowl rings merely for being lucky enough to have been born with the last names Mara or Rooney.

This is why we as a country must nationalize all sports.

I've long said that a smart politician would become an instant presidential front-runner by promising to push for legislation banning public funding -- and the extortionate threats to move that encourage public funding -- of arenas for teams in the big four leagues. It'd have to be at a national level, because the threats only work by playing cities and states against each other (which is why Los Angeles has been trying to build a football stadium for their non-existent football team, and why the NFL keeps making strange claims about the feasibility of having team play in London). And such a proposal would be a good start, but it wouldn't end all the worst practices of owners, from fan-gouging to television blackouts to mistreatment of current and retired players to wholly incompetent hiring and firing decisions. No, the only solution there, as usual, is full socialism.

Just about the only honest argument there is for public stadium financing is that sports teams have a tangible non-economic benefit to communities. They're often deeply ingrained parts of communal identity. They help define the character of cities or regions. They are cultural institutions, in other words, like museums, and orchestras and opera companies. Unlike opera companies and major metropolitan museums, sports teams tend to make a lot of money without the need for charitable donations, and they are not usually run as nonprofits. (Though NFL and NHL teams are part of leagues -- consortia representing the interests of owners -- that are designated, rather improbably, as nonprofits.)

We already have an example of what this would look like in the NFL with the Green Bay Packers, a publicly-owned team operated as a non-profit corporation. It has been a stunning success, with the person in charge of all football decisions having that authority not because he made a lot of money in direct marketing or real estate, or because his father owned the team, but because of his experience and expertise in football. Nationalized teams would be free of unscrupulous, meddling owners. There's no reason why they wouldn't continue to be massive money-makers, though now that money would be going toward the communities that follow and love the teams, and not random lucky billionaires who usually don't even live in the same state. Just think of what one year of New York Giants apparel sales could do for north New Jersey! All the leagues already essentially profit-share (when billionaires go into business with one another they tend to adopt some rather socialistic rules of conduct, instead of agreeing to pure cutthroat competition), so no municipality's team would have to be run much more cheaply than any other's.

And I highly doubt the "product" would suffer, because it's not hard to do much worse than our current idiot billionaires. Does anyone seriously think some Bloomberg-approved basketball technocrats would've done a worse job operating the Knicks than bluesman James "JD" Dolan over the last 12 years? The fact that the "free market" has failed so miserably for one of the most legendary teams in the biggest, richest city in the country is proof that these teams must be nationalized. (And let's not even start on the Mets.) New York City's new socialist mayor must recognize this. The time is ripe for Bill de Blasio to seize the Knicks (and the Nets, and the Yankees and Mets, and the Rangers, and I guess the Islanders, after next season) and turn them over to the people who truly love them.

Unfortunately, the Jets are out of his hands. We'll have to rely on Chris Christie to clean up that mess.