The rent is still too damn high! 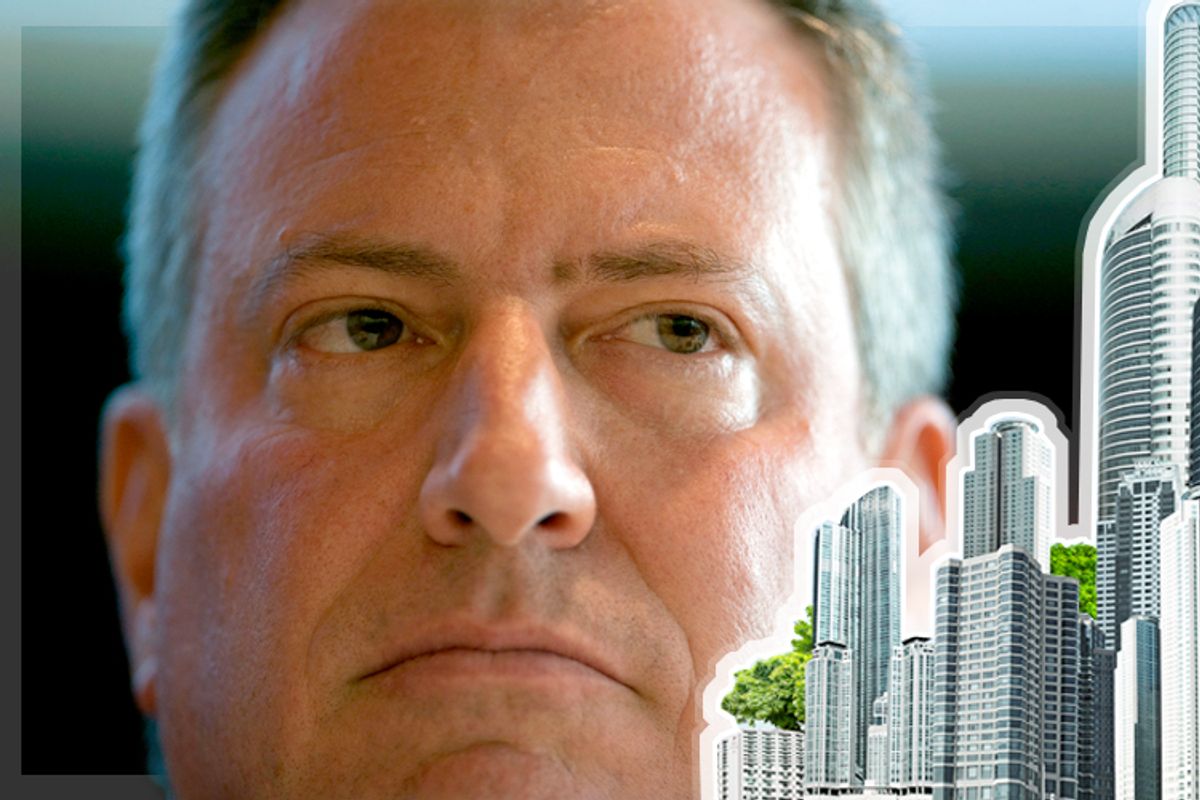 A new year has begun, and with it, a sharp political pivot in New York. Incoming mayor Bill de Blasio is the first Democrat to hold the office in 20 years, and his ascendance marks more than a transfer of power. De Blasio was the most liberal of the Democratic candidates, winning acclaim from the Left — an early endorsement from The Nation — and inspiring panic on the Right, including a comical New York Post cover he shared with a hammer and sickle. Using the much-discussed “Tale of Two Cities” refrain, he positioned himself as an advocate for New York City’s strugglers and strivers. In Wednesday’s inaugural address, the new mayor emphasized the scope of his mission, “to put an end to economic and social inequalities that threaten to unravel the city we love.”

Now comes the hard part. De Blasio’s signature proposal may be the “millionaires tax” to fund universal preschool education, but if he intends to tackle the cost of life in New York City, one issue stands above the rest: housing.

Average rent in the four subway-accessible boroughs crossed $3,000 per month this summer, which is about three times the national average. New York City rents have increased by more than 10 percent over the past decade, while median income has fallen. In 2011, according to research from the State Comptroller’s office, one in five NYC households was “severely rent-burdened,” spending more than half its income on rent; 44 percent of NYC households spent more than 30 percent of income on rent (a typical benchmark for affordable housing). The city’s homeless population has reached record levels even as homelessness declines nationally.

The high rent is not unique to New York: In the 25 largest U.S. metro areas, housing costs grew at more than twice the rate of household incomes between 2000 and 2010. “It is hardly hyperbole to call the growing lack of rental affordability a crisis,” notes a recent report from Harvard’s Joint Center for Housing Studies. After decades of decline, the rental share of American households has increased from 31 percent in 2004 to 35 percent in 2012.

As the keystone of America’s largest and least equal metropolitan area — the wealthiest quintile of New York City residents earn, on average, $200,000 more than the poorest — New York confronts a housing shortage on the greatest scale. Bill de Blasio made inequality the central issue of his campaign; if he wants to effectively address it, housing will have to be the central issue of his mayoralty. What can he do to lower the cost of living in New York?

The current housing crunch is not, by most measures, the worst in the New York City history. To understand the complexity of the city’s residential profile today, you must revisit the years following the First World War. Restrictions on materials had brought new construction to a halt during the war, and inflation after the armistice further deterred developers from building. Between March 1919 and April 1920, the city’s vacancy rate fell from two percent to one-third of one percent. In a city of 5.6 million people, there were fewer than 3,500 vacant apartments.

That period saw the debut of New York’s first rent control legislation; the city’s first public housing was built in the following decade. Since then, each of the succeeding approaches to providing affordable housing has piled upon the last. There are roughly a million rent-controlled and rent-stabilized apartments in New York today. Another 400,000 New Yorkers live in public housing buildings, and several hundred thousand more live in units subsidized by various federal housing initiatives, including Section 8, Mitchell-Lama, and the Low Income Housing Tax Credit.

The mayor of New York City, in other words, is at the helm of a uniquely complex housing system.

The widest-reaching policy change — politically fraught though it is — would involve rent stabilization, which keeps about 45 percent of the NYC rental supply below market rate. Whatever their political persuasion, economists do not like rent stabilization, and it has become a favored whipping boy for armchair observers of cities. By keeping nearly half its rental housing off the open market, the argument goes, New York inflates the cost of the remaining properties.

This is true. But the effects of rent stabilization are more complex. As economist Peter Dorman writes: "The most compelling argument for rent control is neighborhood stabilization, the idea that social capital in an urban environment requires stable residence patterns. If prices are volatile, and this leads to a lot of residential turnover, the result can be a less desirable neighborhood for everyone.” In effect, rent laws constitute a subsidy for longtime residents at the expense of newcomers. That means lingering support, in a rapidly changing city, for older businesses and restaurants; it also means that economically diverse neighborhoods persist against the odds. It’s improbable that de Blasio would alter the policy in either direction.

Public housing, on the other hand, is most certainly a battleground. The Bloomberg administration moved to allow market-rate condos on the open land – heretofore occupied by parking lots, playgrounds and lawns – between the city’s public housing towers. Such buildings would provide retail storefronts in underserved areas, as well as a much-needed source of funding to the NYC Housing Authority. As so-called 80-20 projects (80 percent market rate; 20 percent affordable housing), these buildings would add to the city’s housing supply across the board. But NYCHA residents are wary of the idea, and de Blasio has expressed his own reservations.

That these issues inspire so much vitriol — one speaker at Wednesday’s inauguration compared New York City to a plantation — owes much to the personality and personal wealth of the outgoing mayor, who infamously boasted that high rents were a “good thing” because they indicated demand for the product that is New York City. (We know what you meant, Mike, but still…) At the same time, Bloomberg actually did spearhead a sizable affordable housing program. His administration has financed the construction and preservation of more than 124,000 units, with some 40,000 more planned by 2016, at a cost of $8.3 billion. But less than one-third of those apartments are new. The rest are existing units whose subsidy agreements were set to expire and have been extended. There’s a big difference between maintaining the amount of affordable housing and expanding it.

All this makes de Blasio’s pledge to build (or preserve — be careful of the distinction) 200,000 units of affordable housing extremely ambitious. After all, tens of thousands of apartments are expected to exit federal subsidy programs during de Blasio’s first term. And it will be especially ambitious if de Blasio keeps his promise to tighten the standard of “affordability” — Bloomberg’s affordable housing policy was often criticized for applying regional standards of wealth to poor urban neighborhoods.

To achieve his goal, de Blasio has proposed mandatory inclusionary zoning for rezoned neighborhoods, which would require all new developments of a certain size to include affordable units. He will push for new taxes on vacant lots to encourage construction. He will try to invest the city’s public pension funds in affordable housing construction.

There are a few other tricks at his disposal. For one, he can revoke parking minimums (the requirement that developers include parking spaces in new construction), which drive up the cost of new housing. The most important thing he could do would be emulating his predecessor by updating zoning codes to allow for high-density development around subway lines, particularly in underbuilt Queens.

What’s certain is this: If de Blasio manages to build (and preserve) 200,000 units of affordable housing, his administration will have to oversee a construction boom that makes Mike Bloomberg look like Mike Mulligan. The days of federal support for public housing are long gone. Affordable housing programs have been neglected as well. In 2012, the NYC Department of Buildings issued permits for a mere 10,599 units of housing, market-rate or otherwise. Can de Blasio drive “the hardest bargain possible” with developers and still increase that number?

Any success will be edged with a certain irony. De Blasio’s remarkable campaign capitalized on popular anger at Michael Bloomberg, and nothing – not big sodas, stubbed-out cigarettes or Citibikes – was a more potent symbol of the Bloomberg era for its detractors than the glassy towers that now pierce the skylines of Chelsea, Williamsburg, Downtown Brooklyn and Long Island City.

In her inaugural speech, Public Advocate Letitia James assailed the priorities of the outgoing mayor with just that illustration. “We live in a gilded age of inequality,” she said, “where decrepit homeless shelters and housing developments stand in the neglected shadow of gleaming, multi-million-dollar condos.”

Whether new residential construction alleviates housing prices (because more supply = less demand) or makes hot neighborhoods even hotter is a matter of debate. But either way, short of an unlikely assist from Washington, the path to affordable housing runs through private development.

De Blasio is smart enough to understand that developers and progressives must form an uneasy alliance. His supporters, at least in the short run, may be in for a surprise.