"Fruitvale Station" director Ryan Coogler: "Our film is a domestic drama, it’s not a race-themed film"

Ryan Coogler talks to Salon about the Oscar race, help from Forest Whitaker and comparisons to other films 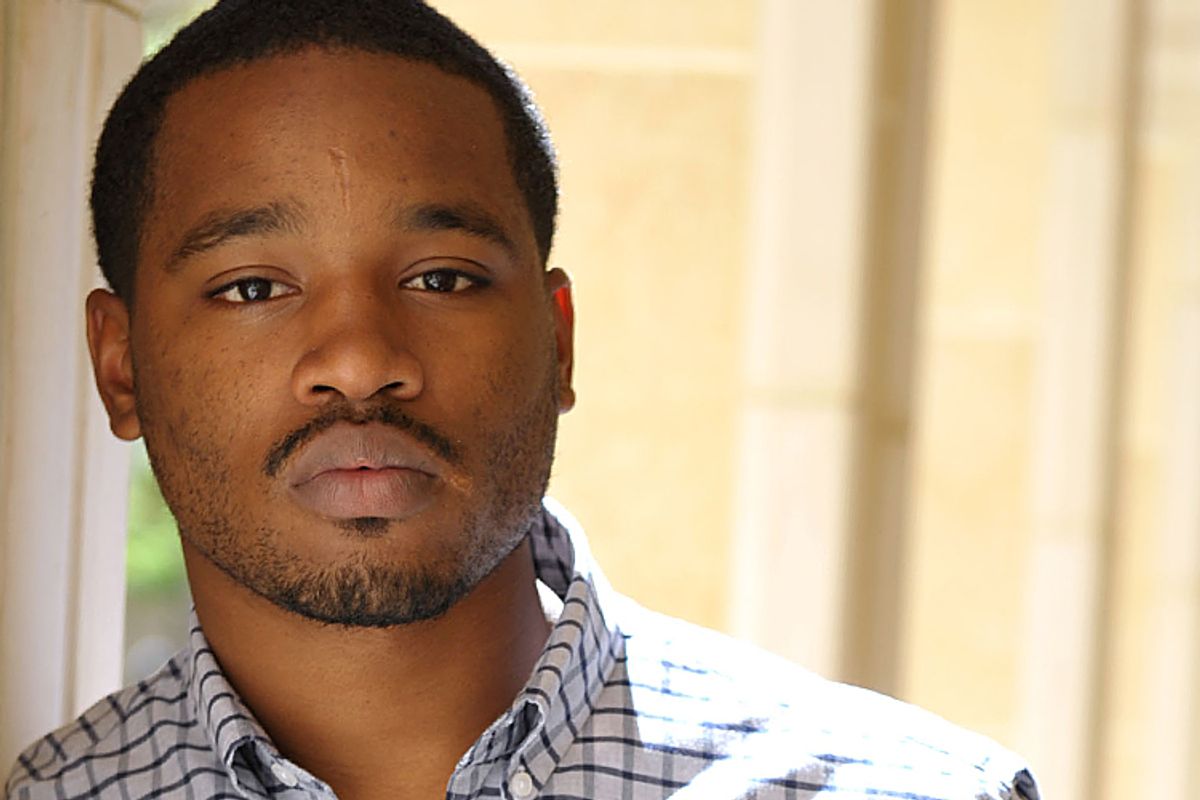 "Fruitvale Station" is one of the films in the Oscar conversation with a black protagonist, and it's been somewhat inartfully slotted together with "12 Years a Slave" and "Lee Daniels' The Butler" in order to create a conversation about "race-themed films" in 2013.

The director Ryan Coogler doesn't see it that way. "Fruitvale Station," to be released on DVD and Blu-Ray Jan. 14, is "a domestic drama, it’s not a race-themed film," he says. "Fruitvale Station," which depicts the real-life killing of a BART passenger in Oakland, is Coogler's first feature film, and was made after Coogler was discovered by Oscar winner Forest Whitaker, who stars in "Lee Daniels' The Butler."

Those two films, in spite of their easy categorization by Oscar pundits, get at their stories in very different manners: Daniels' film uses a broad national sweep to tell an epic story of systemic change, while Coogler's is smaller-scale, more intimate, keeping the focus on the final day in the life of Oscar Grant (played by Michael B. Jordan).

Coogler, who is 27, spoke to Salon about how the film got made and how strange it is to hear films with black protagonists "overperforming": "You look at people who are gatekeepers, you look at where they're from, the kind of people they grew up around [...] That’s where the disparities come through."

People describe this film as being part of a year of race-themed films. Do you have any reaction when "Fruitvale Station" is placed in comparison with films like "Lee Daniels’ The Butler" and "12 Years a Slave"?

I look at it on different levels. For me, our film is a domestic drama, it’s not a race-themed film. The main character is African-American and that’s a part of his reality. But the film is about his relationships with his loved ones. That being said, I’m an African-American writer-director, and when people lump a film that I’ve made with films made by other African-American writers and directors, I don’t mind that. I actually welcome it. That’s fine. I think that’s part of growing up in this country. I’m used to that, you know what I mean? I’m used to comparisons being made just because people have a common ethnic background. Is that right or wrong? More than anything, as we move forward, these things fall away. The novelty wears off and it becomes normal to see representation from people of different backgrounds both behind the camera and in front of the camera and in terms of perspectives of the story.

I think it’s still fairly uncommon for there to be a successful African-American director. Proportionately African-American people are underrepresented. What would it take for the Hollywood system to allow non-white people to be able to make films reflecting their experiences?

I’m not going to pretend to be a studio expert, because I’m very new to the industry. I think what it boils down to is money. That boils down to the justification for a lot of things. It’s all about return on investment. The people who are making decisions come from a certain background and have certain ideas about what will make money and what won’t and what people will go to see and what people won’t. When you see those paradigms being broken, that’s what’s exciting.

It strikes me as funny when people say something like “This film or that film overperformed,” because it’s like, who’s doing the judging? What are the expectations; why wouldn’t a film like “Fruitvale Station” or “The Best Man Holiday” do well?

Definitely. You’ve got to understand. A lot of it is about perspective. If you look at people who are gatekeepers, you look at where they're from, the kind of people they grew up around -- what’s formulating their decision making? That’s where the disparities come through. Hopefully the industry continues to evolve to reflect society more.

Given what you’re describing, it’s great for you that you’ve found The Weinstein Company and Harvey Weinstein to be a gatekeeper that let you in.

First it was Forest Whitaker who gave us this incredible opportunity when I was in film school. From there, once the film was done, absolutely it was incredible to link up with a distributor like The Weinstein Company. But Forest saw opportunity in the film and related to the film and wanted to get it out there and stand behind it and fight to get it into theaters. It was really, we were definitely fortunate in that aspect.

Talk to me about Forest because so often you hear about or imagine people pulling up the ladder behind them. Instead in this case, Forest, an Academy Award-winning actor, made the difference in starting your career.

Yeah, Forest isn’t the kind of guy that would pull up the ladder behind him at all. He’s somebody who is constantly trying to build communities and not just in the entertainment industry, in life in general. You call him, you never know where he’s going to be. He could be in Uganda, in Mexico doing conflict resolution, he could be working with the U.N. That’s just the kind of person he is. I’m really thankful that our paths crossed.

Much like Forest, you are gearing up for awards season. As someone who is relatively new to this -- and also someone who's come from Sundance to promoting your film for almost a year -- is it exhausting, exhilarating, beside the point?

I’m learning about the process. It’s kind of all of those things. And the cool thing about it is that it has an endpoint. It’s not never-ending. It does stop at some point. So, with that being said, it’s great to do all you can to that point. I’m balancing, trying to find time to write my new stuff, which I’m kind of getting the hang of as I go. I’m trying to write every free bit of time that I get.

As opposed to sitting and writing in a sustained way.

Which is how I wrote “Fruitvale.” It was very sustained, very structured, because I wasn’t doing any press. I was just working and then I would come home and write, which was great. But that’s not my reality right now. So it’s really a learning process, and it’s really a combination of exhaustion and exhilaration and doing things that never would’ve been possible the year before. I’m not taking anything for granted.

Tell me a little bit about the themes that interest you going forward as you continue to write.

I’m wondering who your favorite filmmakers are. Who are your biggest influences?

Oh, I’ve got tons -- too many to talk about. I find inspiration everywhere. Before I knew I wanted to be a filmmaker, I was very invested in pop culture. It was American filmmakers coming up -- my father was a member of the hip-hop generation -- so obviously it was Spike Lee and John Singleton. There were a ton of our stories, stories we connected to going through in a major way. My mom was a big cinephile, so I would watch a lot of television with her -- I would watch the old-school “Twilight Zone” with my parents all the time. My mom was a big Scorsese fan; we watched a lot of films from Spielberg and George Lucas, a little Coppola. But then once I hit film school and started to really study it, two things happened: I started to reach back and look at filmmakers that made things in the past that weren’t around anymore, like Alfred Hitchcock and Stanley Kubrick, and even way back, like Bergman and Fritz Lang. And I got opened up to international cinema, and that’s when a light really went off. I started to watch a lot of films made in other countries, and a lot of my other favorite filmmakers are foreign. I love Jacques Audiard quite a bit, Cristian Mungiu out of Romania quite a bit, a lot of Brazilian films. I saw “City of God” and got really into it as well.

Something that really strikes me is your age -- you’re really quite young for a director and I can’t imagine myself being in the kind of situation you’re in. I’m wondering if it's hard to convince people -- whether cast, crew, distributor, press -- that you can handle all this. Because you’re not only new to the industry -- you’re also in your twenties.

It’s interesting. I haven’t had that situation come up too much. I mean, I’ve only made one film. I’ve made a lot of short films, but when I was making short films it was with other film students, generally. But I haven’t had those situations where it’s like, “Hey, you’re a kid. Do you know what you’re doing?” I’ve been fortunate enough that I haven’t had those situations. And if I’m working on a project, I have very little tolerance for any type of discrimination -- whether it’s discrimination based on somebody’s ethnic heritage, or whether it’s discrimination against somebody’s socioeconomic heritage, or whether it’s age. Ageism works both ways. Somebody might want to disrespect because they’re older. It works at both ends of the spectrum. And on our set, we had a costume designer who was in her seventies and a producer who was younger than I was, and everybody was expected to work together and give each other the same amount of respect.

It wasn’t utopia -- sometimes it was really intense, sometimes there were clashes. But it was all coming from the right place, from everybody caring about the project and everybody giving each other the same amount of respect that we owe each other as human beings. I think that if you look at filmmakers and you look at their filmography, oftentimes you’ll see their most interesting work when they were in their twenties. A lot of my favorite filmmakers were like that. They did a lot of their most amazing films very, very early in their careers, when they were too young to know what they were doing.