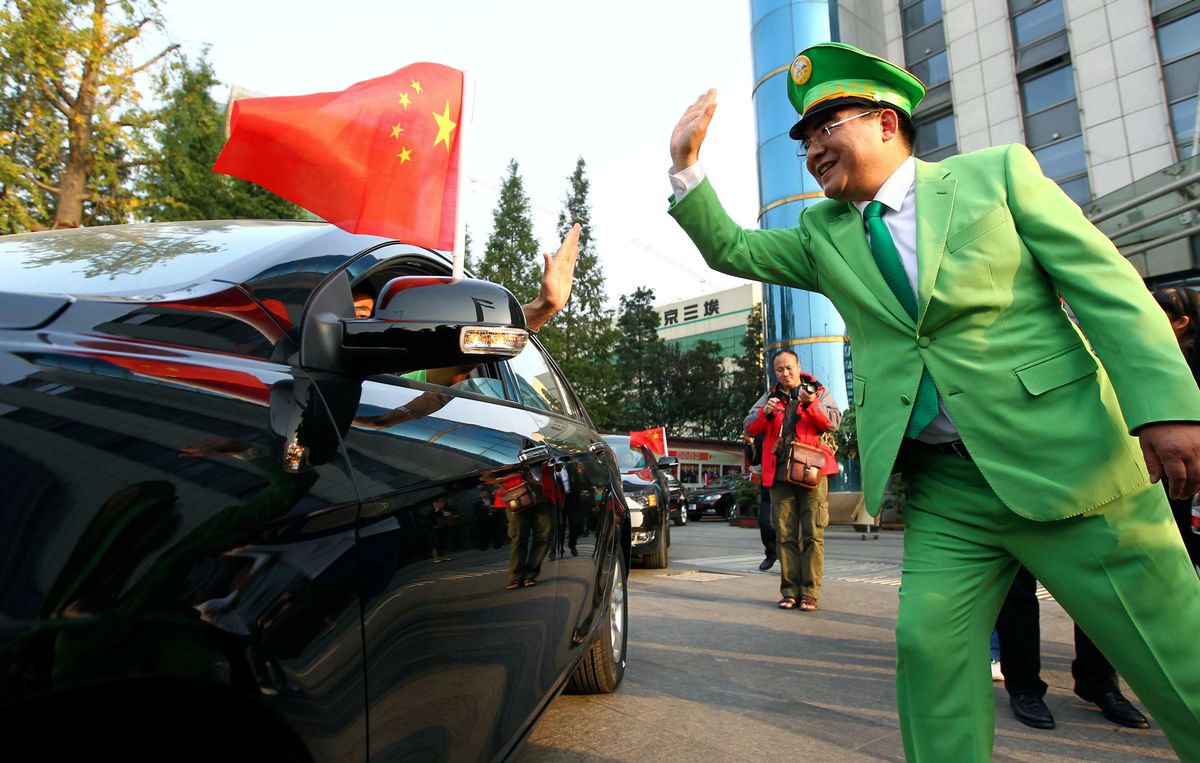 PHILADELPHIA, Pa. — Say what you will about oddball millionaire Chen Guangbiao — the man has a knack for publicity stunts.

Within China, he has made a name for himself as a sort of homegrown Donald Trump. Though not China’s richest man (he has an estimated $740 million net worth from his recycling businesses), Chen has commanded outsize attention by staging grandiose, sometimes ridiculous displays of his wealth, generosity, and keen instinct for the spotlight.

In 2008, after the devastating Sichuan earthquake, he donated $15 million for reconstruction — and held a photo shoot in which he asked survivors to brandish bundles of cash he had given them.

In 2012, during anti-Japanese riots, Chen bought 43 Chinese-made cars for people whose Japanese-branded cars had been smashed. At the event, he wore a lime-green suit and leapt on the roofs of the cars, which had been specially covered with red carpet.

In 2013, during the nadir of Beijing’s noxious winter smog, he began selling cans of air plastered with his face and offered in “flavors” such as “post-industrial Taiwan.”

Now, in the midst of tensions between foreign journalists and the Chinese, Chen claims he wants to buy the crown jewel of American media — The New York Times.

He declared his plans on Monday at a media awards ceremony in Shenzhen, saying he would soon be flying to New York City “to discuss the acquisition of The New York Times.”

Chinese media reported that he intended to fly to New York City on Friday and then “have dinner with a middle-level leader from The New York Times on Sunday.”

Asked about Chen’s supposed meeting with a Times executive, a company spokeswoman saidthat “We have no information about any such meeting.”

He said he assessed the Times to be worth $1 billion. (The company’s market cap is currently over $2.3 billion.)

Chen’s mission in buying the paper would be to “present an authentic China” to the outside world, he said. If the deal went through, the haziness of this mission might be cause for reporters to worry — but Chen’s quest seems more of a quixotic fantasy than business reality.

The Times, which has been controlled by the Sulzberger family and their ancestors for over 100 years, has repeatedly denied that the newspaper is up for sale. In 2013, after the sale of The Washington Post to Amazon mogul Jeff Bezos, company chairman Arthur Sulzberger “emphatically declared” the Times was not for sale.

“Will our family seek to sell the Times? The answer to that is no,” he said.

Chen has something of a history with the Times. In 2012, after Japan nationalized the Senkaku islands, he bought a half-page ad in the paper calling on the US to “condemn” Japan’s move. He asked, “How would Americans feel, and what would America do, if Japan announced that Hawaii was its territory?”

The New York Times affair isn’t the only stunt Chen has pulled this holiday season. On Dec. 24, Chen released a photo of himself surrounded by 16 metric tons of 100-yuan bills, apparently worth $231 million. He said it was to encourage people to participate in a nationwide economic census that takes place in early 2013.

Following the photo, the Chinese news portal Sohu.com announced it was opening an inquiry into the sources of Chen Guangbiao’s wealth. His recycling company, Jiangsu Huangpu Recycling Resources, reported six annual losses from 2004 to 2010.