Disturbing wedding trend: Getting married at a plantation 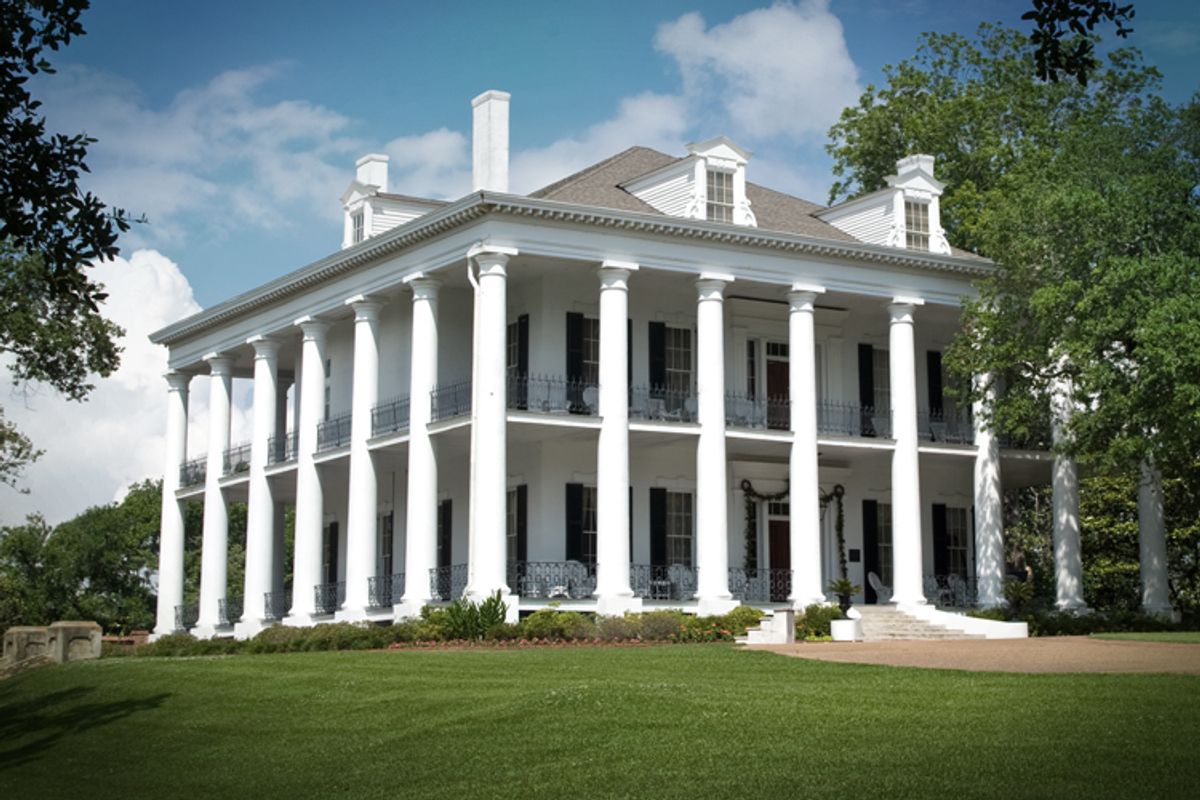 “12 Years a Slave,” which takes viewers into the deep interior of a plantation, may be a Golden Globe-nominated film of searing depth – but for some, it’s a wedding backdrop.

Plantation weddings aren’t anything new (and as Ani DiFranco showed, plantations can be sites for other misguided events as well). But with the popularity of Pinterest, the visual of heterosexual, primarily white couples exchanging kisses on plantation grounds is being neatly folded into the virtual “romantic” wedding aesthetic. A simple visit to the open “wedding” boards can yield a pin or two of large white columns and an extensive bridal party lined up at various plantations around the country, sandwiched between pins of classic three-tiered wedding cakes and fluffy wedding dresses on hangers.

Many of the wedding-venue plantations currently floating around Pinterest have a pronounced history of slavery – which is reduced to a mere line or two in the “history” on some websites.

Oatlands Historic House and Gardens in Leesburg, Va., which did not respond to emails for comment, was founded by a “young bachelor” from a prominent Virginia family in 1798, according to its website. Oatlands openly states that this bachelor's “growing wealth was based on enslaved African Americans,” and that the plantation once had the largest slave population in Loudon County at 128 slaves.

“Unfortunately, little documentary evidence remains about the personal lives of these workers or the slave culture at Oatlands,” the website states.

“Workers” is just one of a few curious terms chosen by these historical properties turned wedding venues, some of which refrain from explicit use of the term “slaves.”

Belle Meade Plantation in Nashville, Tenn., which also did not return emails for comment, describes the “136 enslaved workers” who used to inhabit the once 5,400 acres of land prior to the Civil War.

More disturbing is that just a few clicks down from this “history,” which makes no reference to the atrocities endured by the slave population, is an “event” tab that features photo galleries of smiling wedding parties – a recurring tactic.

Lindsay Kennedy, the director of LK, an event planning company in Richmond, Va., says that she plans about three to five weddings at plantations a year. Most of her clients are Caucasian and between the ages of 23 and 35. The couples she works with don’t express any sort of discomfort with the history of plantations, putting down anywhere between $3,500 and $4,500 for just the venue itself, no lighting or tent construction included.

Kennedy hasn't noticed an uptick in plantation weddings -- rather, she says, there's a sustained interest in “beautiful” outdoor spaces. What leads her clients to plantations specifically is the desire for an “old house” on a pretty property, preferably near water.

Mary Edmonds, the events manager at Tuckahoe Plantation in Virginia, also reports consistent interest. The boyhood home of Thomas Jefferson, which includes no mention of slavery in the “history” section of its website, hosts about 25 weddings a year. While May and June are generally the most popular months, Mary has noticed a recent [rise] in September and October weddings. Like Kennedy’s clients, most of Edmonds' clients are white and college-educated, with a smattering of interracial couples.

Tuckahoe’s average wedding has anywhere between 125 and 150 guests for the five-acre event site (of 598 acres total), with a few particularly opulent affairs going over 250. The basic rental for just the venue starts at $5,000, including electricity. But a series of a la carte items, which include lighting packages, lanterns and a bedroom in the historic mansion for the bride to get ready in, can push the cost up to $8,000. Another a la carte item is a tour of the house between the ceremony and the reception.

But while Tuckahoe’s general tour goes into “everything” – including slavery – the wedding tours do not bring up the S word.

“There is talk of slavery sometimes, only when guests bring it up. We don't delve into that on principle in a wedding but if someone is interested, we are happy to talk about it in detail,” says Edmonds.

The slave quarters are not accessible to guests. They are now the “private residences” of the employees of the plantation and not available on the tour, even the one that goes into “everything.”

For the minimalist wedding tour, Tuckahoe instead focuses on Thomas Jefferson and the home as a cornerstone of his childhood. For many plantations-turned-venues, the visible “history” available to online readers is the detailed chronicling of the white family who owned the property, without a single slave named or mentioned. The slaves are reduced to a one-line collective – never an individual or even a family unit. The Belle Meade Plantation website includes a precise recounting of when the property received running hot and cold water as well as a telephone, but the plantation’s entire 200-year slave history is diminished to half a sentence. And Belle Meade was home to one of the largest slave-holding families in Nashville.

Magnolia Plantation and Gardens in Charleston, S.C., is one of the plantations that deviates from this model with a separate area of their website devoted to the Magnolia Cabin Project. According to the plantation’s website, the slave quarters now house “an award-winning 45-minute program in African-American history” that recounts slavery through Civil Rights with $8 admission for adults.

“Magnolia recognizes the importance of acknowledging the vital role that Gullah people [descendants of enslaved Africans who live in the Lowcountry region of the U.S. states of South Carolina and Georgia] and culture plays in any interpretation of Lowcountry history. By addressing this often overlooked part of the region's narrative, Magnolia seeks to respectfully afford credit where credit is due,” reads the website.

Boone Hall Plantation in Charleston, S.C., which declined emails and phone calls for comment, also has, according to their website, a “critically acclaimed” exhibit on the slaves who occupied the plantation grounds. It is divided into “themes” within eight slave cabins on “Slave Street.” Among the “actual historic relics,” “pre-recorded narratives”, and “audiovisuals” are such themes as “Slave Crafts” and “Their Work and Life” – the word “work” falling considerably short of describing unpaid, endless labor that could include being bought, sold and having one's children forcibly removed.

Just as problematic as the use of plantations in the burgeoning “dreamy” and “romantic” Pinterest wedding sphere is the growing archive of these images: white and affluent affairs on historic landmarks that are entirely divorced from the atrocities of slavery. The developing virtual trough for young and eager brides looking to pin their way to the perfect day reduces plantations to mere backdrops, stages for white and privileged love and commitment. And they are absolutely eager. A 2012 Mashable survey reported that two in five engaged women use Pinterest, specifically to show ideas they like to vendors. According to wedding industry analyst Liene Stevens, one in five engaged couples used Pinterest to plan their weddings in 2010. That number has now grown to one in three couples.

Furthermore, the sentimentalizing of plantations engenders a dangerous and selective nostalgia, which omits the monstrosities of rape, abuse and dehumanization of African Americans and replaces them with the commercial gloss of a big white wedding. The severely edited narration also underscores the continued devaluation of an entire people, the continued erasure of a part of history that needs to be recognized.

But, as Edmonds says, “Most of the guests who are here are not looking for a history lesson.”