How the right profits from the culture wars

Homophobia like Phil Robertson's spurs donations and sells t-shirts -- but ultimately, we all lose 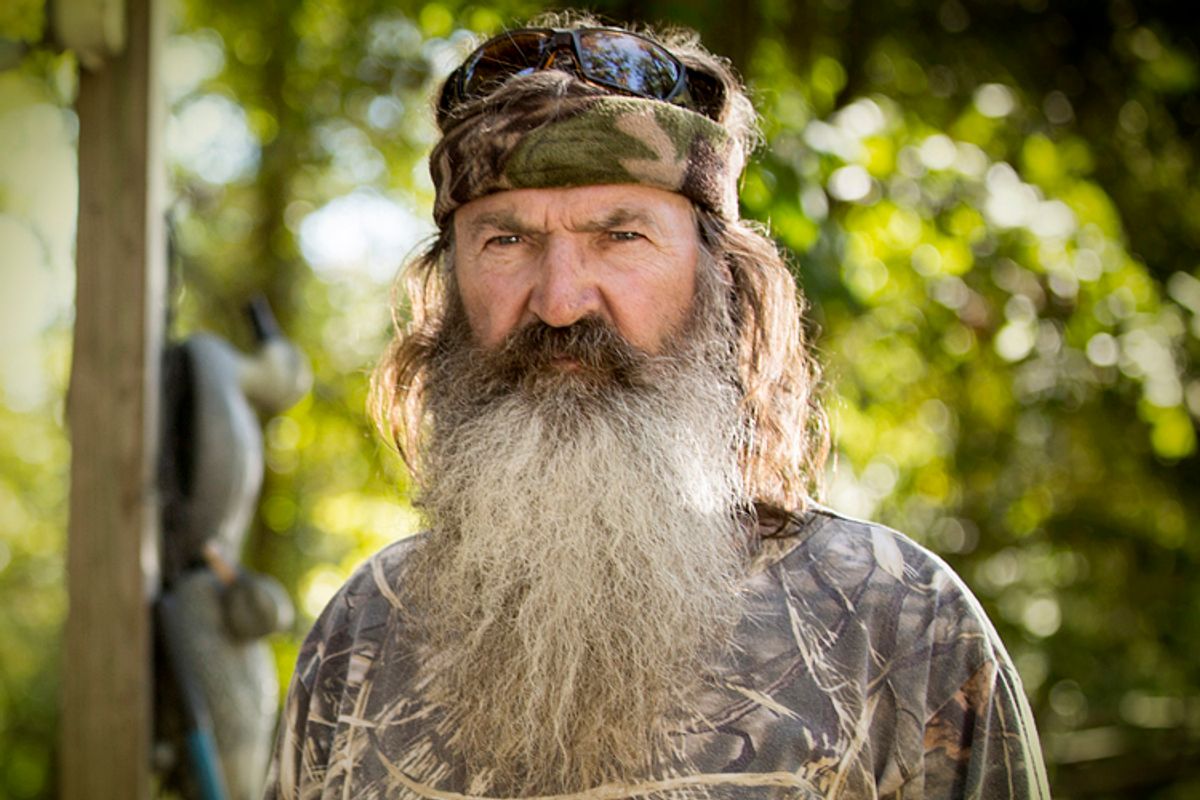 I’ve always heard that you never know what you truly care about until you’re tested, and I wasn’t worried about “Duck Dynasty” until I saw Phil Robertson’s face on a t-shirt. I was traveling on a Megabus back to Chicago after the holidays, nestled in the very front seat with a copy of Edith Wharton to keep me warm, when we stopped at a rest stop in Indiana. We’d been at the same location a few days before to stock up on trail mix and McDonald's, but there was something noticeably different this time. One of the rest stop employees was diligently folding “Duck Dynasty” t-shirts on a table right near the front, proudly displayed for all to see. Each was emblazoned with a different ominous saying -- these included “I’m Watching You Jack,” “I Ain’t No Yuppie,” “A Superhero Has Got to Get His Rest” and “A Family With a Cause.” I was so enraged and taken aback that I thought I was going to vomit on the floor.

At first, I found it strange that the rest stop would be bringing out new merchandise after Christmas, but I realized they must have recently ordered the shirts to capitalize on the show’s renewed relevance. Of course, they existed well before the controversy (you can find a myriad of “Duck Dynasty” products on Amazon), but the last statement in particular had taken on a new relevance. “A cause?” I asked myself. “What cause exactly are you supporting?” Throughout the scandal, conservatives have insisted that the real issue here is free speech. We should be supporting Robertson’s right to be a homophobe in the name of patriotism, but this only seems to work so long as he’s saying things that support a far-right agenda. When Dixie Chicks lead singer Natalie Maines spoke out against Bush in 2003, that rallying cry was nonexistent. If I'd visited the same rest stop a decade earlier, I would have found shirts that read: “I’m Ashamed the Dixie Chicks Are From America.” A popular seller, the shirts were used as a galvanizing force against the band, while their music was pulled from the airwaves.

Of course, it’s never been about free speech. It’s about the culture war, stupid. Scandals like America’s “Duck Dynasty” moment are about nothing more than our ability to exploit current events to further a culture of division and partisanship, igniting our old hatreds for short-term gain. Phil Robertson’s comments might seem like a liability for “Duck Dynasty” as the wave of opposition mounts, but the conservative voices of support have been just as influential as the critics. For Fox News or Republican figureheads like Sarah Palin and Bobby Jindal -- both Team Duck Dynasty -- men like Robertson are the core audience, down-home guys who grew up on religion, beer, guns and Reagan. Palin needs to appeal to the “Duck Dynasty” voter for her ongoing career in media pageantry, and Jindal is likely looking at a presidential run in 2016. He needs supporters -- and donations.

The problem is that Phil Robertson is the product of a system that teaches us we are different in order to exploit us. Growing up, I spent my summers in Petersburg, Ky., where my father lived with his second wife, and I knew a thousand guys like Robertson. These were the kind of guys who were raised on Reagan, PBR and Remington assault rifles, who learned to be afraid of people like me in church. I grew up as a Southern Baptist, where gays weren’t just sinners -- they were a donation strategy. The week newly elected San Francisco mayor Gavin Newsom illegally allowed the city’s same-sex couples to be married, our pastor spewed a long sermon on the hellfire that was raining down on California. He ended the tirade with a reminder that this was why we needed to give to the church, asking for extra tips to the collection basket. Like an evangelical Don Corleone, our pastor was offering protection from the outside world -- all for a low, low price.

In America, what’s the answer to 99 out of 100 questions? Money. Today there’s a booming business of hate, from the pulpit to Rush Limbaugh and his corporate sponsors. Our culture wars wouldn’t exist if we didn’t believe that it was more profitable to keep Americans apart than bring them together.

If anything, our culture of culture wars has only made “Duck Dynasty” more popular. The show is a $400 million empire that A&E won’t be parting ways with anytime soon. The channel recently announced that Phil Robertson will get his job back, although the network will be airing PSAs on tolerance as an apology for his remarks. As with the dramatic surge in Chik-fil-A sales following last year’s anti-gay flap, the show might see ratings increases as Robertson supporters flood the airwaves -- while others tune in to see what all the fuss is about. However, the bottom could drop out. “Two and a Half Men” saw a short-term payoff in publicity after Charlie Sheen’s 2011 public meltdown -- before its star imploded and had to be replaced. After Chik-fil-A’s initial gains in revenue, its Brand Approval Rating quickly plummeted.

Even though we might believe there’s profit in hate, the greater gains come from breaking down our barriers. A friend recently told me about a woman from the creative writing class she teaches. This student had been raised in the Evangelical tradition -- but found her faith tested when her best friend came out to her. Not knowing how to process the information, she went to her congregation to ask their advice. They responded that they were going to go “get” her friend -- in order to cleanse him of sin. To protect her friend (and warn him), the student immediately hopped the train to his apartment, where she frantically begged his forgiveness for not accepting him sooner. He told her that everything was going to be fine -- because at least she was there. She had finally come to him, and that was a start.

As the two reconciled at the door, her friend’s boyfriend entered the foyer, but he was quickly brushed away. “No, no,” the friend said. “Not now.” His boyfriend had come in with a Bible in hand, one that was dog-eared and marked with Post-its. He had clearly been up all night studying the Bible to challenge the woman's views, and judging by the look on his face, he’d come in ready to start a war. However, it wasn’t time for fighting. It was time to have dinner and sit with each other. When we’re sitting behind a computer, at a television screen or in the pews, it’s easy to believe that what threatens us is the “other,” the people we’ve been told to hate. But the people we should be worried about are those who keep us apart in the first place. Some may reap the benefits, but in the long run, no one wins.