4 ways Americans are being cheated out of their retirement funds 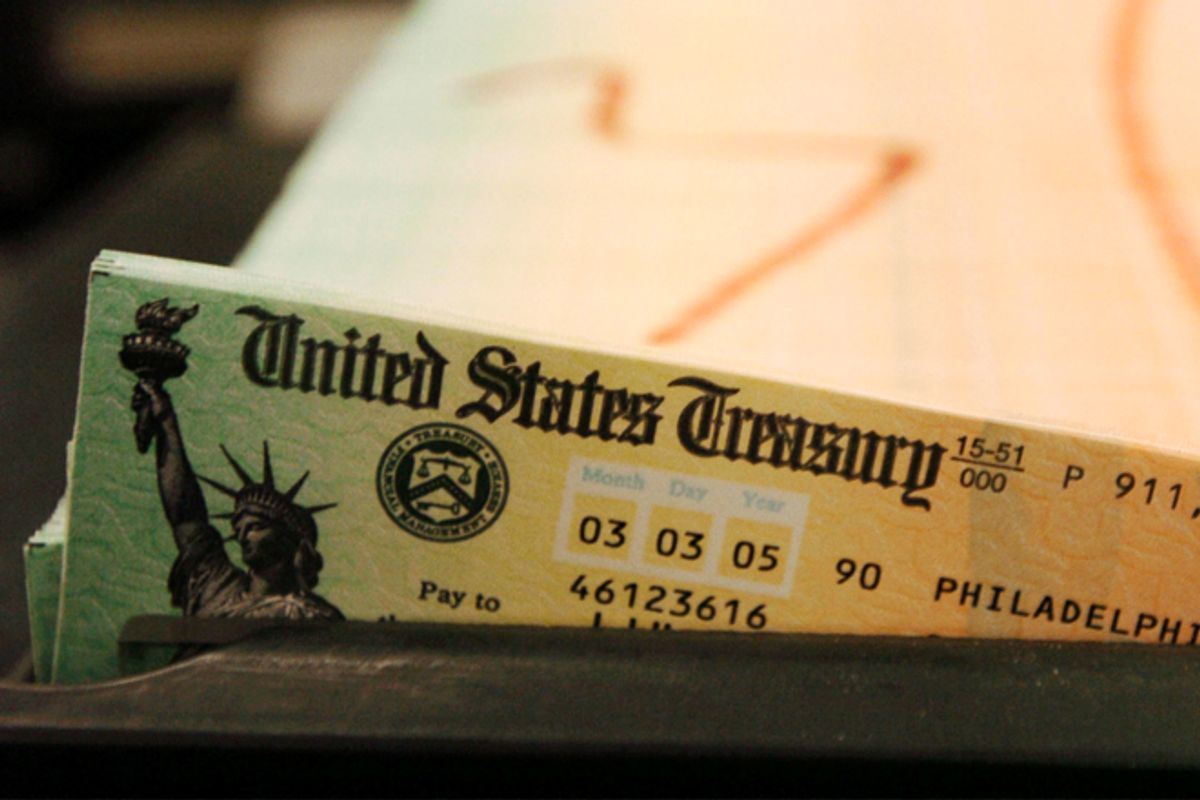 The fear of running out of money in retirement is America's greatest financial concern. It's a fear greater than  death.

But the American workers who have paid all their lives for retirement security are being cheated by wealthy individuals and corporations who refuse to meet their tax obligations, and who have found other ways to keep expanding their wealth at the expense of the middle class.

1. Federal Tax Avoidance is the Biggest Threat to Social Security

Conservatives say that Social Security is too expensive, and that  cutbacks and a later retirement age are necessary. But they refuse to acknowledge the facts about missing revenue. Annual  tax avoidance by wealthy individuals and corporations is in the trillions of dollars, over double the cost of Social Security.

Big corporations are the worst offenders. The numbers are startling. For every dollar they paid relative to payroll tax in the 1950s, they  now pay ten cents. In just the past ten years they've cut their tax rate  in half.

The sum total of tax underpayments, tax haven losses, corporate tax avoidance, and tax expenditures (most of which benefit the very rich) is  over $2 trillion. Although Social Security costs  less than half of that, Congress is targeting Americans who have paid into it at the highest rate, while tax avoiders are left undisturbed.

From whom does Congress propose to take retirement benefits? From people whose average retirement account is under $30,000, and for whom Social Security is the  largest source of retirement income. From those who have already experienced  Social Security cuts through delayed cost-of-living adjustments and higher taxes. From the half of the middle class whose food budget, by one  estimate, will be $5 a day in their retirement years.

In what  David Cay Johnston calls "nothing short of theft," states are reneging on pensions that workers have been paying into for years. Illinois, Michigan, California and a slew of other states have mismanaged and squandered funds that belong to their employees, and then, in effect, have blamed those employees for the mess by penalizing them with pension cuts.

Once again, one of the reasons for the shortfall is corporate irresponsibility. In 2011 and 2012, 155 of the largest companies paid just  1.8 percent of their total income in state taxes (3.6 percent of their declared U.S. income). The average required rate for the 50 states was 6.56 percent in 2011. Similar results were found in a Citizens for Tax Justice (CTJ)  report on 2008-10 state taxes, which found that 265 large companies paid an average of 3 percent in state taxes, less than half the average state tax rate. The results are summarized at  Pay Up Now.

How much money is this? The missing 3% tax on over  $2 trillion in profits is anywhere from $30 billion to $60 billion, depending on the true U.S. portion of total corporate income.

But instead of taking on the delinquent corporations, states have increased  sales taxes and property taxes, while building up their  regressive lottery systems to the point that eleven states collected  more revenue from their lotteries in 2009 than from corporate income tax.

3. Corporations Play One Underfunded State Against Another

The news from the states gets even worse. On the pretense that their presence enriches the people of their home states, and that subsidy-green pastures lie right across the border, companies have cunningly negotiated tax-cutting deals in return for the promise to stay. A Good Jobs First  report describes the process, which costs state and local governments up to  $80 billion a year.

Dozens of  deals have been contrived, at least ten each in Michigan, New York, Ohio, Texas, Louisiana, Tennessee, Alabama, Kentucky, and New Jersey. Sixteen states have enacted the Private Income Tax (PIT) diversion, by which EMPLOYERS rather than governments get to withhold state income taxes from employee paychecks and to keep all or some portion of the funds.

Illinois' pension mess has its  roots in corporate threats to bolt the state: $100 million to Motorola; $150 million to Sears; $56 million to Boeing to bring its headquarters to Chicago; and nearly $200 million to  Caterpillar, which paid only  2 percent of its U.S. income in state taxes in 2011-12, and whose CEO  called Illinois "unfriendly to business." Meanwhile, other Illinois companies are trying to get in on the handouts. Agribusiness leader  Archer Daniels Midland is threatening to leave the state. The Chicago Mercantile Exchange made a big  fuss over its tax bill in 2011, even though its 2008-10 profit margin was higher than any of the top 100 companies in the nation.

Washington is another state being victimized, at the hands of  Boeing, which according to Citizens for Tax Justice paid nothing in federal taxes over ten years and  nothing to Washington in state taxes, despite $32 billion in pretax U.S. profits. Now, while engineering a  bidding war among multiple states, the company has wangled the nation's single biggest state tax break ($8.7 billion over 16 years) while informing its employees that their pension and benefits will be slashed.

In California, the tech giant Apple has its own way of dealing with state taxes, claiming residency in tax-free  Nevada.

Ill-informed state leaders might heed the findings of a New York State Tax Commission, which said: "There is...no conclusive evidence from research studies conducted since the mid-1950s to show that business tax incentives have an impact on net economic gains to the states above and beyond the level that would have been attained absent the incentives."

4. Banks Take a Big Chunk of Our Retirement Accounts

In the individual states, banks have their fee-absorbing tentacles wrapped around employee pension plans. In  Rhode Island it is projected that $2.1 billion in fees will be paid to hedge funds, private-equity funds, and venture-capital funds over the next 20 years, about equal to the amount saved by freezing Cost of Living Adjustments for public workers. In Detroit, $250 million in bankruptcy expenses was doled out to firms that employ lawyers, accountants, financial analysts, and public-relations consultants. In  South Carolina, the plunge by pension managers into private equity and hedge funds has resulted in $1.2 billion in fees since 2008.

American workers and retirees are the victims, and their numbers are growing. According to the National Institute on Retirement Security, almost half (45 percent) of working-age households do not own any retirement account assets. The average working household has virtually no retirement savings. But it doesn't matter to business-happy privatization advocates, who don't seem to recognize that this poorer half of America even exists.