My anger and the mighty broom

My mother kept a clean house, even as her marriage cracked. Now, as an adult, I understand the retreat of sweeping 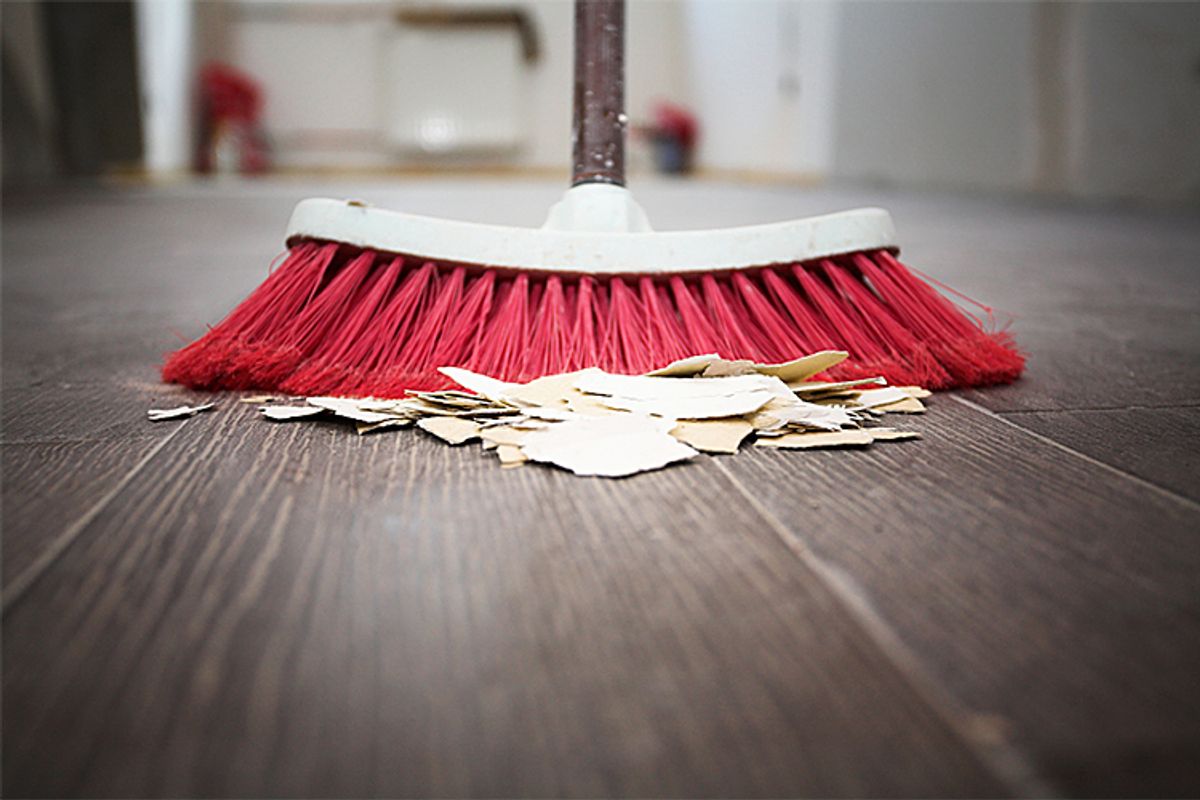 When I woke up this morning, rising in the dark before my husband, I put on tea water and, as I usually do first thing and without thinking much about it, I took up the broom by the backdoor and started to sweep.

I swept under the fridge and around the small table where we’d soon eat our oatmeal. I swept over the bump of threshold that leads to the hallway, digging out the fir needles stuck in the cracks. I lifted the rug by the backdoor to reach pockets of dust. The teapot whistled and the furnace groaned while I gave the floor a second pass in case a wisp of detritus escaped me the first time, and then I pushed the small pile of dirt I’d made into a corner so I could add to it through the day.

My floor was clean. At least for this single moment: unmarred. The rest of the house is not as tended to as the floors. I don’t mind a little clutter, stacks of books and mail, a few dirty dishes in the sink. But for reasons that I’ll perhaps never understand completely, I cannot abide an unswept floor.

My broom is as familiar to me as anything I own. I like its cool weight in my hands. I like the bubble of solitude others heed to me when I’m sweeping. My children tease me and so does my husband — she’s not happy without a broom in sight. True, I have a second broom resting by the front door and another tucked away in the mud room. Don’t touch those brooms, they’re mine. Don’t move the brooms. I need to know where they are. I buy only those made from corn straw, the bristles stitched tight with bright thread then fastened to a wooden shaft, the same fashion of broom used for generations, hung over doorways to prevent evil from entering, the handles handy for beating on rugs to rid the house of menace. I’ve chased cats with my broom; I’ve transported spiders and tree frogs outside on the tips of the bristles. I’ve a few times swung a broom in fury at my husband, the straw white with spilled flour, red with spilled wine, the bristles pointed at him, stay back, go away, leave me alone.

It used to be that a straw broom was set on the ground for a couple to jump over — one leap from a solitary life into marriage. Once across, there was no jumping back.

Why are you so angry, my husband asks me once our fighting has cooled. Why are you the angriest person I know?

I don’t recall my mother sweeping much when I was a child, though I remember that she kept a straw broom in the closet. Instead of using it, my mother vacuumed.

At night, when my father was out, my father so often out at night, she’d finish cleaning the kitchen until the counters gleamed and every dish was in its place, and then she’d vacuum. This was when I was perhaps 7 years old, maybe 8. I couldn’t drift off to sleep unless the lull of the motor washed over me, the forward thrust, the backward hum as she pushed and pulled across the living room carpet, down the hallway. If the final clink of the dishes wasn’t followed by the whirr of the vacuum, my legs would get stiff under the blankets, my neck hard on the pillow. Any gap of sound got me out of bed to stand in the stream of light at the bedroom door. I had to make certain that our mother hadn’t left us here alone, my two sisters and my brother and me. What if we were alone? What would happen to us if we were alone? I’d lean out just far enough to listen for murmuring voices from the front of our house but not so far that she’d see me and shout at me to, goddamn it, get straight back to bed. I’d better not see you up again.

I stood in the silent half-dark, half-light, convincing myself that she was distracted by a show on the television, or that maybe she got a phone call from a friend willing to hear her out, my young mother, about my father, how weary she was that he was away again, what a relief it was to have him gone. I don’t know, really, what she talked about, her complaints or her secret joy at his absence, as it was all so long ago, but I believe that even then I recognized a burden of loneliness even while I suspected the pleasures of her solitude. Her children were asleep and her rugs were clean. She could pour herself a Coke and drink it by herself; no one around to sneak a sip. She could tear open a package of Alka-Seltzer, slip two flat disks into a glass of water and watch them fizz into nothing. She could dream about a life other than this one, this one that was hers, 26 years old, a houseful of squabbling children, a husband she’d married because too many people had told her not to and she was going to show them and do what she wanted to do.

What was there, then, for her?

One night long after the vacuum was turned off and stored, the television shut down, I woke to the sound of my name. Her voice, my name. She was calling me from the kitchen. In bare feet and nightgown I thumped my way down the hallway and stopped at the kitchen door. My father was in there with her, face to face with her, and one of them held a knife. Why can’t I remember which one had the knife? I’m pretty sure it was her.

My thin mother in her own nightie holding a carving knife so that its point was perhaps a foot from my father’s belly. He still wore his suit, except his coat was off. I saw it tossed over a chair at the table. His white shirt was rumpled and his tie was loose. His cheeks burned and from his open mouth I smelled the highballs sloshing in his gut.

Let’s say that he jerked toward the knife, attempting to grab it. He’s hunted all his life. He knows knives and guns. His grandparents owned the town hardware store. He understands tools and implements. He meant to get the knife from my mother’s hand, but he was slow and a little clumsy, and her fingers were wrapped tight around the handle. The curls on her head bounced about her face when she hopped backward, away from him, as if even her hair meant business.

“Go get Pat,” she said without looking at me. She stared instead at my father. She meant that I should get Pat Warner, my mother’s best friend who lived across the street. I twisted toward the front door that was shut tight against the late hour. Going to get Pat meant opening that door, stepping out onto the cold porch under the star-streaked sky. The black gash of road I’d have to cross alone. Pat’s husband, Joe, looming across the shadow of their own front door, What do you want? Nothing in me wanted to do it. Everything in me wanted to do it.

“Stay right where you are,” my father said to me.

One foot had been on its way to follow my mother’s instructions, but now I brought it next to the one that had refused to budge, hoping I hadn’t made a whisper of a sound, hoping they might forget I was there, this man and this woman. If I was still enough, the scene in front of me might turn to ash.

“Don’t you move,” my father said. “You stay right there.”

Memory, it seems to me, is nothing but a series of winding roads, hairpin curves negotiated in the fog, mostly leading to dead ends. As for this night, the night when I was 7 or maybe 8, the night of the knife, there’s nothing more than this, the three of us standing in my mother’s tidy kitchen on my mother’s clean floors, my father’s shirt nearly disappeared against the painted white cabinets. I must have gone back to bed to wake in the morning to find all of our knives back in the drawer and my parents in their room, stirring into the day together, having eased for now the seethe of resentment, and Pat Warner across the street without an inkling that she’d been summoned for rescue but that I hadn’t found the gumption necessary to raise her from the night.

Decades have passed since then. Too many decades. Still, when I sweep in the mornings, up by myself in a quiet house, before the radio news is turned on, before the wail of the teakettle starts up, I think about mistakes I’ve made, the lot and stack and snarl of mistakes, and sometimes I think about the mistakes that were made on me. I don’t expect a fix or even an explanation. I wait for the welt of memory to subside while I sweep waste into corner piles in the kitchen, the living room, the bathroom, mounds I’ll add to as the day’s hours stretch by.

Before I go to bed at night I wander the house with the dustbin and a small hand broom. I kneel to the floor and brush each pile into the silver scoop until only a thin line of dirt remains. I back the bin up and brush again: The line gets thinner. I back up and sweep, back up and sweep, capturing most of what’s there, though I’m aware every time that there’s just no way to get it all.

Debra Gwartney is the author of "Live Through This," a memoir, and co-editor of "Home Ground: Language for an American Landscape." She teaches in the low-residency program at Pacific University and lives in Western Oregon.