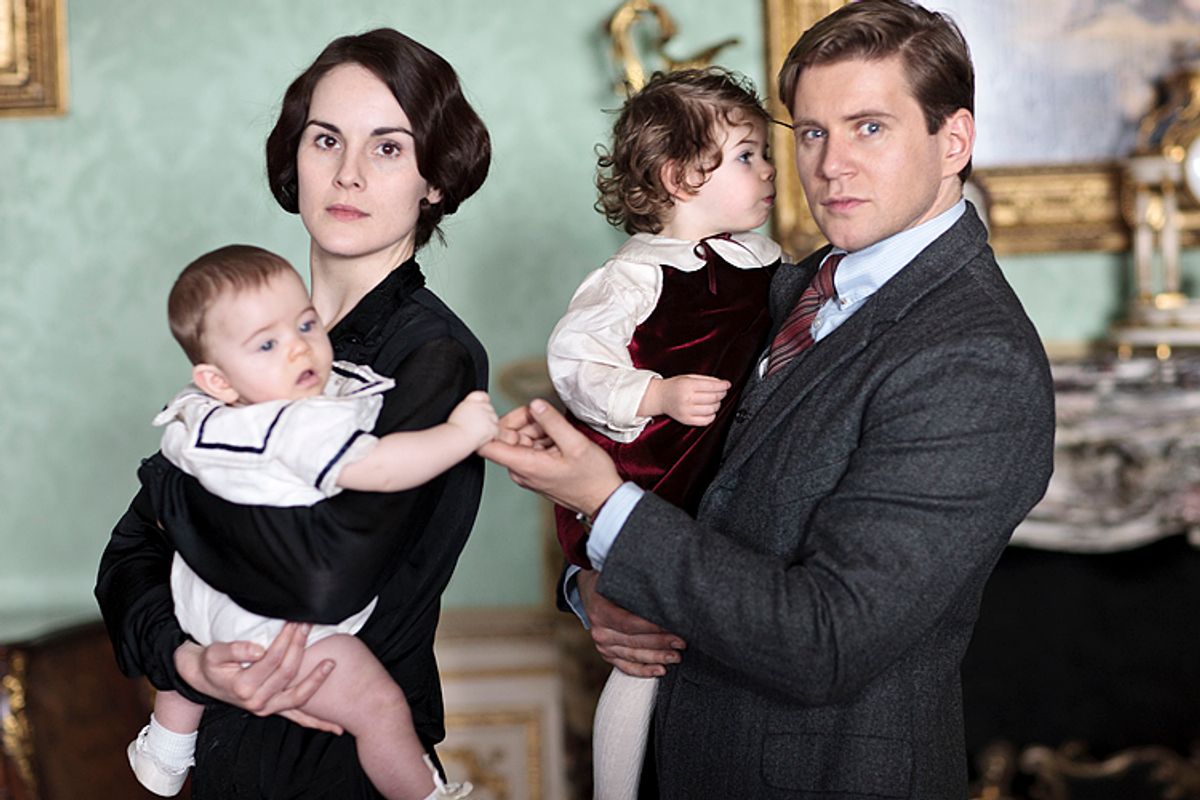 Any hit show will get its tie-ins -- products intended to give ravenous fans something to spend their money on in the few moments a day not spent watching the reruns. One can still buy "Sex and the City" martini glasses or "Sopranos" cookbooks. "Mad Men" had its own Banana Republic line of clothes.

But all of those shows were at least somewhat connected to the present moment; one might not be a sassy New York singleton or an Italian in northern New Jersey or a midcentury ad exec, but drinking or cooking or dressing like these folks wouldn't be entirely out of place.

Not so "Downton Abbey," the explicitly escapist PBS soap; viewers can soak up the mise-en-scène all while knowing there's absolutely no way they could indulge themselves in such dubious pleasures -- rich, uncomfortably structured gowns; a giant, drafty mansion; 24-hour servants.

But they can come pretty close. There's a cottage industry in bloom of unofficial -- and official -- tie-in products that will allow you to feel just like Mary Crawley (when Matthew was alive!). Here are a few of the wildest, weirdest, silliest "Downton Abbey" tie-ins.

"While We Were Watching Downton Abbey." Who needs a book club when you have a TV club? This tie-in novel, published during Season 3 but advertised in magazines lately, is not per se affiliated with "Downton Abbey" or the "Masterpiece" franchise -- obviously, given that its plot concerns three modern women ("Samantha, Claire, and Brooke") who discover life lessons while watching the series at "The Alexander, a historic Atlanta apartment building." Samantha, we're guessing, relates to the imperious Lady Mary, while Brooke is a TOTAL Moseley!

"Keep Calm and Downton On." What if a wartime slogan from two decades after the events currently happening on "Downton Abbey" were combined with the themes of our favorite show -- and fine 2010 ceramic glazing? This mug shows co-workers, family and friends that you love, and know little about, British culture!

"What is a WEEK END?" T-shirt. Isn't it pronounced by Maggie Smith like "week-end"? Hyphenated? Anyway, this looks comfortable. Just don't spill your tea on it, LOL!

"Downton Abbey Edwardian Collar Pendant Necklace." This necklace, if worn by Cora or Edith, wouldn't have cost $25 even in 1921. But why not toss it on to get their Spanish flu pallor?

"Downton Tabby." Do you love actor Dan Stevens? Would you love him even more if he were a cuddly-wuddly calico? Why are you still on this page, then?

"Mouseton Abbey." The natural enemy of "Downton Tabby." (Good thing there are so many common vowel sounds in this TV show's title!)

Etsy "Downton Abbey" portraits. Searching "Downton Abbey" on Etsy pulls up a lot of "Great Gatsby"-related content -- go figure! But these portraits are kind of cute in an extremely stylized way, and would make for a great shrine for the séances you conduct trying to bring Sybil back to life.

"Edwardian Cooking: The Unofficial Downton Abbey Cookbook." Want heavy puddings, boiled meats and lots of starch? Just be forewarned -- you'll have to do all the cooking yourself, unless you hire your own "Mrs. Patmore and Daisy"! (Don't do it, they're total drama queens.)

Downton Abbey wine. Now we're at the products officially licensed by the show; though we rarely see the characters drunk, they're swimming in a sea of fine wines at every meal. Put on your tux and sample the blanc! Or cry in your bathrobe rewatching the last Christmas special as you take a slug of the claret!

Downton Abbey tea. This gets to the very heart of the "Downton Abbey" merchandising conundrum -- there are teas far less expensive and roughly as good as these, which are seemingly designed to be simple and period-appropriate. But to accept that we're in 2014 and you can get a thing of Constant Comment for $.15 a bag is to accept that the past isn't as good as the present. It's to fly in the face of the dopey wisdom of Lord Grantham. Better to sip your tea and imagine that everyone, from cats to mice to yourself on a wine bender, is living the life of the aristocracy!