Meet the poverty liars: GOP peddles more garbage in war on the poor

Struggling to project “compassion,” Republicans revive Reagan’s destructive myths about how to help the poor 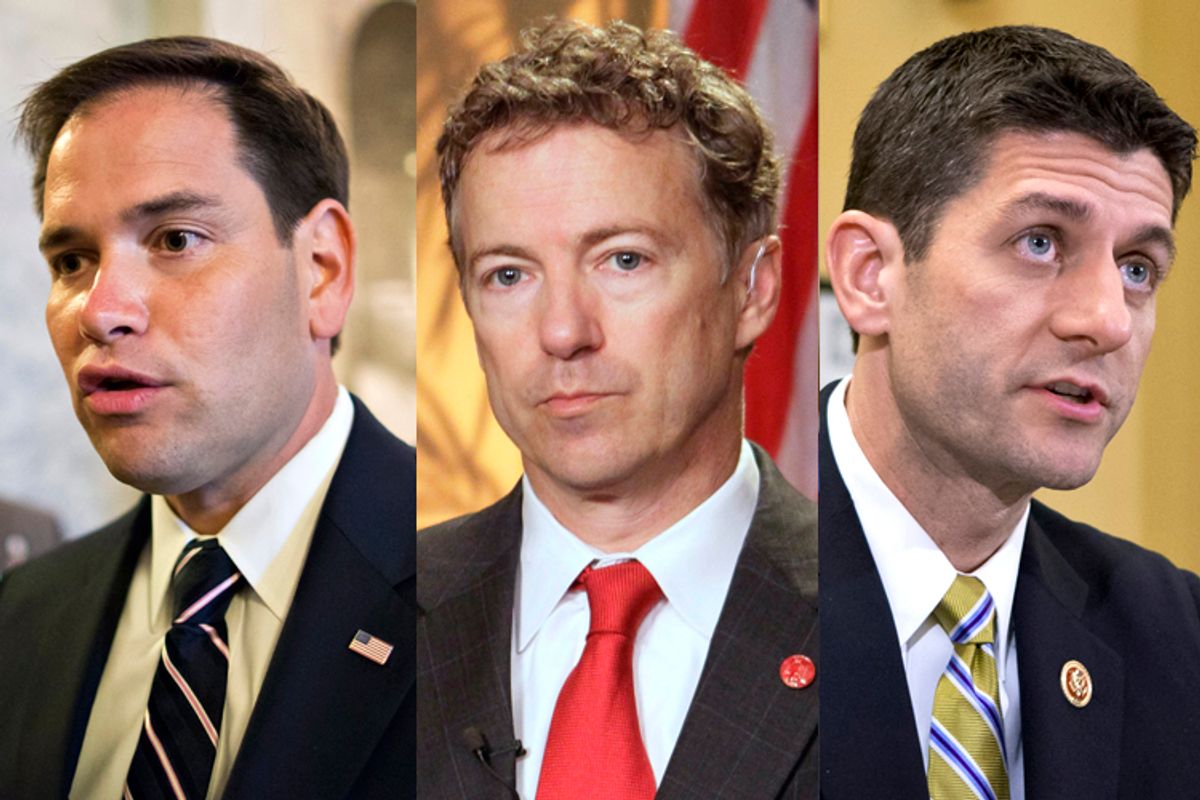 As we observe the 50th anniversary of Lyndon Johnson declaring the “War on Poverty” this week, it’s worth remembering the way Ronald Reagan wrote its history, and its epitaph, with a soothing nine-word bromide: “We fought a war on poverty, and poverty won.”

It’s worth remembering, because as Republicans scramble to appear as though they care about the poor, circulating memos teaching how to seem “compassionate” and digging “anti-poverty plans” out of dusty file folders from the 1980s, all they’re doing is updating Reagan for the 21st century. And Reagan was dead wrong the first time around.

It’s almost impossible to exaggerate the effect of Reagan’s War on Poverty lies, especially as they’re warmed over by Sen. Marco Rubio and Rep. Paul Ryan as they dream about 2016. Even though Reagan began his Republican political career as a race-baiter and anti-welfare demagogue, by the 1980 campaign and his presidency, he’d softened some. He didn’t rail as much against “welfare queens” and “young bucks” buying T-bone steaks with food stamps. Now he projected concern for the poor: He wanted to help them, and poverty programs hurt them.

Of course, we can’t forget the racial component of Reagan’s anti-welfare animus. Racial division is what doomed Johnson’s War on Poverty, almost as soon as it began. I was riveted by Slate’s feature on the actual woman behind Reagan’s race-baiting “welfare queen” stereotype. Reagan didn’t invent her, as many people thought over the years; his anecdote was based on Linda Taylor, a Chicago woman who did in fact use multiple identities to commit welfare fraud.

But my takeaway from Josh Levin’s mind-blowing piece had nothing to do with government poverty programs: Linda Taylor was a scary sociopath, a serial identity-switcher credibly accused of multiple cases of kidnapping and murder. Yet politicians and the media focused on the welfare fraud charges. It was the Chicago Tribune, not Reagan, that dubbed her the “welfare queen.” The Chicago police officer responsible for investigating her actual crimes was aghast at the focus on her welfare-grifting rather than her more far serious crimes. She went down in history as a symbol of a “welfare cheat,” not the kind of shrewd but deadly con artist and criminal that comes in every color and gender. And she got away with everything except the welfare fraud.

There weren’t neighborhoods full of Linda Taylors; there was one. But she’s the person Reagan chose to represent the millions of mothers – the vast majority of them white, by the way -- struggling to feed their children on welfare aid that in many states might not bring them over the poverty line. And too many Americans chose to believe him.

Later, they believed his lyrical lie about welfare. Reagan revolutionized the poverty game for Republicans: You didn’t have to be angry and Nixonian, or an Archie Bunker type, to be against welfare anymore; instead you could project compassion. White middle-class folks didn’t have to worry that they were indulging resentment, or God forbid racism, by opposing poverty programs. Those programs hurt the poor; Reagan said so.

And here we are again. On the one hand, it’s a slight relief to see some in the GOP abandoning their ugly narrative about “makers” and “takers,” their demonization of the “47 percent” who “just won’t take care and responsibility for their lives,” in Mitt Romney’s campaign-killing words. House Republican leaders are now coaching members to show “compassion” for the unemployed, making sure they reflect that it’s a “personal crisis” and that they will give “proper consideration” to an extension of benefits -- as long as Democrats cut other programs, of course -- instead of rejecting it out of hand as they did last month.

Meanwhile Sen. Marco Rubio made a whole video to channel Reagan’s ideas about poverty programs. (Is it just me, or is anyone else waiting for him to lurch for a nearby bottle of water and take a slug?) Sleepy-eyed and absolutely unconvincing, Rubio asks: “After 50 years, isn’t it time to declare big government’s war on poverty a failure?” Not surprisingly, his cheesy video offers absolutely no policy agenda to fight poverty.

Rubio’s efforts are being met by well-deserved cynicism in the media and among Republicans. Not so for Paul Ryan’s claims that he’ll develop a bold new anti-poverty agenda. Yet so far, the notions Ryan has floated sound like warmed over Enterprise Zones, the failed 1980s GOP prescription for urban neighborhoods that cut taxes and created other incentives for employers to hire poor residents. Not to be outdone, Sen. Rand Paul is advocating “enterprise zones on steroids,” what he calls “economic freedom zones” in places like Detroit with high unemployment.

Of course, every reputable study of enterprise zones has found their impact on urban poverty “negligible” to nonexistent. “Enterprise zones are not especially effective at increasing overall economic activity or raising incomes for the poor,” Len Burman of the Urban/Brookings Tax Policy Center told Politico recently. “They just seem to move the locus of activity across the zone’s boundary — reducing activity outside the zone and increasing it inside.”

Criticizing GOP flim-flam on poverty shouldn’t obscure the fact that the War on Poverty didn’t do all that its sponsors hoped. That’s not because we did too much, but because we did too little. It’s true that in the immediate wake of the war’s launch, poverty fell from roughly 22 percent to 12 percent, before it began to climb again in the mid-1970s. Not surprisingly, given that establishing Medicare and expanding Social Security were its core components, Johnson’s anti-poverty push made the biggest strides in reducing poverty among the elderly.

For the rest of the poor, the program was never as ambitious – or successful. Johnson famously rejected a big public works jobs program as too expensive, especially as the Vietnam War escalated. He agreed to make “community action” a centerpiece of his anti-poverty work, but he had very different ideas about what that meant than some of the people who implemented the program. To kick it off, Johnson called Chicago Mayor Richard Daley and told him, “Get your planning and development people busy right now to see what you do for the crummiest place in town, the lowest, the bottom thing, and see what we can do about it. We’ll get our dough, and then you can have your plan ready, and we’ll move.”

But on the ground, community action organizers saw their role as organizing the poor to challenge mayors like Daley, which widened existing fissures around race and power in the Democratic Party. Federally funded anti-poverty warriors often took the side of urban insurgents – which was surely the correct side, in moral terms, but with hindsight, not the most effective way to mount a controversial and weakly bipartisan anti-poverty effort.

Finally, Democrats ran away from the War on Poverty, joining Reagan in declaring that government was too often a problem rather than a solution. Bill Clinton’s anti-poverty agenda was a stealthy one. With one hand, he ended welfare as we knew it with the 1996 reform act; with the other hand, he funneled billions to poor people by expanding the Earned Income Tax Credit – a Republican idea – as well as eligibility for food stamps and Medicaid. That lifted millions of Americans above the poverty line -- but most Americans didn’t know he did it. Democrats from Jimmy Carter to Clinton to Barack Obama – at least until recently -- have contributed to the belief that “we fought a war on poverty, and poverty won,” by refusing to either take credit for existing programs that fight poverty or advance a bold new agenda to update them.

That’s changing some. Obama is said to be readying a big income inequality push for his State of the Union, and he seems to have realized it must include taking aim at persistent poverty. With even Republicans conceding they can no longer demonize the poor, maybe Democrats can do something to actually help them.