Forget 2016, Chris Christie may not even be governor much longer

If this political payback scandal spreads, Chris Christie could have much more to worry about than the Iowa caucus 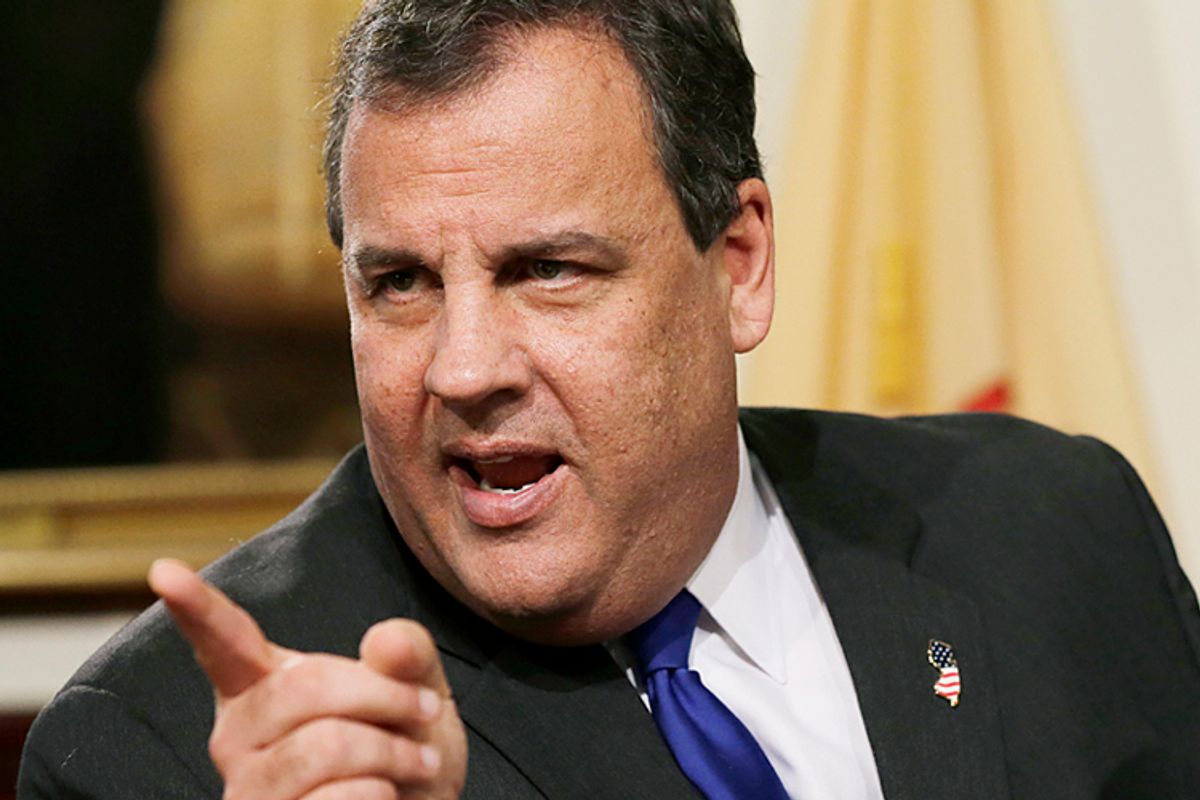 New Jersey Gov. Chris Christie strode to the microphones in Trenton Wednesday night and took an hour of reporters’ tough questions about a plot by staffers to punish Fort Lee’s Democratic mayor by snarling his city’s traffic for four days. Penitent, occasionally defiant, Christie insisted he didn’t know about the scheme. But he said he took full responsibility for the scandal, apologized to the citizens of Fort Lee and promised to get to the bottom of what happened.

Oh wait. That’s not what Christie did at all. The famously fearless governor canceled his one public appearance of the day, ignored the story until late afternoon, and then issued an email statement saying he’d been “misled” by “a member of my staff.” There's word he'll be talking today at 11 a.m. But yesterday, when all the details broke and questions emerged, there was no press conference. No public statement. No apology to Fort Lee Mayor Mark Sokolich or his city or the people of New Jersey for staffers using the crucial George Washington Bridge as a weapon of political destruction, reportedly in retaliation for Sokolich’s refusal to endorse Christie’s reelection bid against Barbara Buono last year.

In a statement so full of word salad it might have come from Sarah Palin, Christie threw an unnamed staff member under the bus – and then resumed his silence. He threw his own presidential hopes under the bus too.

Contrast Christie’s limp response on Wednesday to his shtick a month ago, when he aggressively denied that the Fort Lee lane closures were a form of political reprisal, and even joked that he did it himself.  "I worked the cones actually. Unbeknownst to everybody, I was actually the guy out there. I was in overalls and a hat, but I was the guy working the cones," he said, mocking reporters, adding, “You’re not really serious with that question.” Then he blamed New Jersey Democrats for playing politics, sneering, “It just shows that they really have nothing to do.”

By now the world knows that it was the Christie administration playing politics. The email obtained by the Bergen Record reads like satiric Jersey political noir.  “Time for some traffic problems in Fort Lee,” Christie’s deputy chief of staff, Bridget Anne Kelly, wrote to David Wilstein, Christie’s high school buddy, who won a brand-new $150,000 a year Port Authority job that Christie created for him personally. “Got it,” Wildstein writes back.

That’s the smoking gun right there, but it’s the entire email chain that damns Christie’s administration. Once the media began investigating charges that Fort Lee’s lanes to the bridge had been mysteriously closed, snarling traffic for hours as school began in September (New Jersey officials claimed it was due to an important traffic study, which New York officials said they'd never heard of),  the email round-robin includes Christie’s campaign manager and his communications director, as well as his other Port Authority appointee Bill Baroni, all doing damage control.

Kelly asks if Wilstein had returned any of Sokolich’s calls of concern, and he replies, “Radio silence. His name comes right after mayor Fulop,” a reference to Jersey City Democrat Steven Fulop, who likewise failed to endorse Christie last year. He derides him to Christie's campaign manager as “the little Serbian” (Sokolich is Croatian). After Port Authority officials reopen the Fort Lee lanes, Wilstein tells Kelly that close Christie ally and chair of the commission that runs the Port Authority, David Samson, “is helping us to retaliate.”

Finally, when an unnamed official, referring to reports of kids being stuck for hours on school buses, says in a text message, “I feel badly about the kids. I guess.” Wildstein replies: “They are the children of Buono voters.”

Now we know it wasn’t just the children of Buono voters who were inconvenienced. Fort Lee officials say the traffic jam delayed at least four emergency vehicles, including one trying to reach a 91-year-old woman who later died. It slowed the response to reports of a missing 4-year-old girl, who was eventually found. New Jersey Democrats are livid, and even Republicans are calling for investigation.

Baroni and Wildstein have already resigned to spend more time with their lawyers. Until Wednesday, Christie had only said “mistakes were made,” while railing against reporters for impugning his integrity. His statement Wednesday added few details. In fact, it’s almost incoherent:

What I've seen today for the first time is unacceptable. I am outraged and deeply saddened to learn that not only was I misled by a member of my staff, but this completely inappropriate and unsanctioned conduct was made without my knowledge. One thing is clear: this type of behavior is unacceptable and I will not tolerate it because the people of New Jersey deserve better. This behavior is not representative of me or my Administration in any way, and people will be held responsible for their actions.

It’s hard to square that meandering, Palinesque bleating with Christie’s reputation for candor. As he takes to the microphones belatedly Thursday morning, a few questions are obvious. Christie is a former prosecutor. Why was he so lazy in getting to the bottom of the story that he learned these details “for the first time today”? Are we really supposed to believe he didn’t know why Baroni or Wildstein resigned, beyond the fact that “mistakes were made”? And even if he didn’t know until Wednesday, which I personally find hard to believe, he apparently created or tolerated a culture of vengeance and bullying in Trenton that nobody could responsibly want to send to the White House.

I’m on record, almost a year ago, declaring that Christie would never be president, because of his temper, and his general temperament. My February post was inspired by Christie’s nasty outburst at a former White House doctor, a Republican who said she would like to see Christie become president, who also advised him to lose weight. “This is just another hack who wants five minutes on TV,” he fumed, adding, “She should shut up.”

There already was plenty of evidence that the governor liked to play the bully – and he was so proud of it, he had staffers alongside him to record his outbursts at reporters, teachers and insolent voters and post them on YouTube. His backers said it showed Christie isn’t a slick politician, he was one of us, a straight-talking guy who had a temper, sure. Now he looks like a tough-talking, prevaricating politician who has a temper, and uses the power of his office against his enemies.

I've said it before: Chris Christie will not be elected president in 2016. But if it turns out he knew about his staff’s vengeance against Fort Lee, let alone directed it, he may not be governor of New Jersey in 2016, either.