GOP's poverty scam: Why does it suddenly "care" about the poor?

It's an easy way to look compassionate without changing any policies 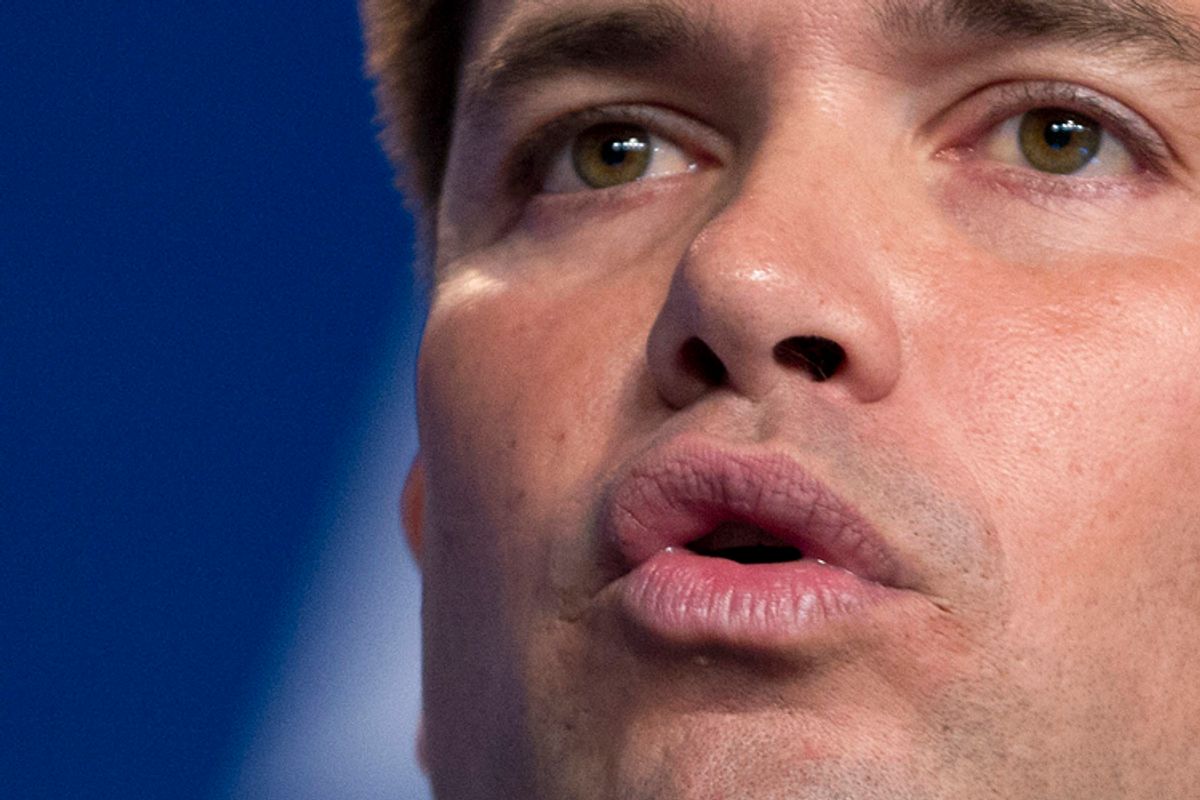 Florida Sen. Marco Rubio finally gave his much-anticipated speech on poverty, a hot trend among Republicans seeking the presidency. Rubio emerged from the dense thicket of conservative think tank writing on the subject with one actual proposal: wage subsidies. Which, you know, fine, let's have wage subsidies! They seem like an OK idea. Sure, they might encourage employers to pay low-wage employees less money in order to receive more subsidies, but if the options are nothing versus wage subsidies, I am going with wage subsidies.

Will any other Republican, though? Unlike raising the minimum wage, any wage subsidy program will actually require the government to spend money, and Republicans are unified in their opposition to the government spending money on poor people. Rubio's support may not do much to convince them to abandon this core principle; he's not the potential party savior he once looked to be.

Still, points for actually advocating for an actual policy that would actually help people! That's more than Paul Ryan, Rand Paul or Eric Cantor have done so far in this rhetorical war on poverty. Thus far, their efforts have run up against the brick wall that is the modern conservative movement's utter inability to craft policy that hasn't been completely discredited by the last 30+ years of American political and economic history. So, Cantor has come up with "school vouchers" and Paul has tried "economic freedom zones," which seem to be like "enterprise zones" -- already the most popular urban economic revitalization scheme extant, to mostly middling effect -- only with even fewer worker protections or environmental regulations. Also a capital gains tax cut. Always a capital gains tax cut. America is just one more capital gains tax cut away from winning the war on poverty!

The recent spike in Republicans suddenly claiming they care about poor people is, honestly, a bit strange. Their voters, for the most part, do not care, and do not care if their politicians say they care. For those wishing to win elections as Republicans in recent years, it has tended to be more effective to loudly denounce the poor, or at least to denounce those who support making the poor less poor. After all, the poor are only poor because they want to be, or are morally deficient, or because of Democrats who keep them poor to maintain a large voting bloc of poor people.

When Republicans called Barack Obama the "food stamp president," they claimed that they meant that it was a shame that Obama's policies had devastated the economy so much that so many people now relied on food stamps. Their actual meaning (well, their actual meaning besides just wanting to blow a racist dog whistle) was that liberal policies had fostered a culture of dependency -- that is, that living on the dole was so swell that unemployment was a better option than working for a living. This, again, is the blame-the-poor argument that the right has made forever and that the Republican Party has enthusiastically adopted since Reagan.

And it's not a terribly ineffective political argument! Americans hate the poor, and deeply resent the idea of any of their money going to help them. That's why Clinton killed welfare, and why food stamps are now at risk. There's little political upside in promising to help the poor, and for years Democrats have only ever promised to help "all Americans" and "the middle class."

But Republicans have decided that part of what hurt Mitt Romney's 2012 presidential campaign was that time he called nearly half the nation moochers. This was, they are well aware, merely a slightly artless restatement of a core conservative belief, but it turns out that in a nation in the midst of an ongoing, seemingly never-ending employment crisis, this is maybe not a popular position among voters not already deeply committed to the conservative project. So saying "I care about poverty" is one way to help shake the correct impression voters have that Republicans are devoted solely to the further enrichment of the already wealthy.

Poverty is also a subject about which it's incredibly easy to bamboozle most of the mainstream political press. You can get swell coverage merely for saying you care about the poor, as Paul Ryan recently has. Because political reporters are unable and unwilling to analyze policy, and curiously reluctant to speak to anyone who can, you can also claim any program at all will lessen poverty or help the unemployed. And for Ryan, "caring about the poor" is a good way to reestablish Seriousness: He becomes one of the Few Serious Republicans with plans to help the poor. Poverty is a better subject for this act than most other liberal issues -- like, say, the environment -- because Republicans are at least allowed to acknowledge that it is bad that some people are poor.

If Ryan talks about the poor to burnish his wonk cred (and remove the stink of his association with Mitt Romney), Paul's new shtick is clearly "compassionate libertarianism" (not to be confused with bleeding-heart libertarianism). Like compassionate conservatism, it is the same as the non-compassionate version, except its proponent publicly expresses compassion for people who will not benefit from it.

The only risk these Republicans have to avoid is supporting any policy at all that will help poor people, because those policies will then be supported by Democrats. If Rubio's idea shows any sign of being able to pass in Congress, Democrats will support it, and then it will become a Democratic policy, and Republicans will be forced to hate it forever. Just about the only prominent Republican elected official who has actually done anything that will actually benefit actual poor people, as Alec MacGillis notes, is Ohio Gov. John Kasich, who accepted the ACA's Medicaid expansion. That is, he helped Ohio's impoverished by enacting a Democratic policy. (He may have done so in part because Ohio is just about 50.1 percent Democratic, according to the 2012 presidential election results, and Kasich is up for reelection this year.)

It's the 50th anniversary of the War on Poverty, and it's nice to see various liberals defending it. For years after its dismantling, no one (well, no one taken seriously in the political elite) was allowed to say that big government programs were an effective means of eliminating poverty. Now, finally, old-fashioned economic progressivism has begun to become a position people are allowed to advocate for in public. (Though everyone is still encouraged to couch all such advocacy in conservative, "pro-market" tones, because that is what our deeply conservative elite is most comfortable with.) There's very little reason to be optimistic that Republicans "discovering" poverty will lead to any serious national effort to eradicate poverty, but maybe (maybe!) it will make conventional liberals less terrified of actually embracing the eradication of poverty as a goal.