It's time to stop buying the New York Post

The newspaper plays on prejudice and rage on a daily basis. It's no longer worth reading 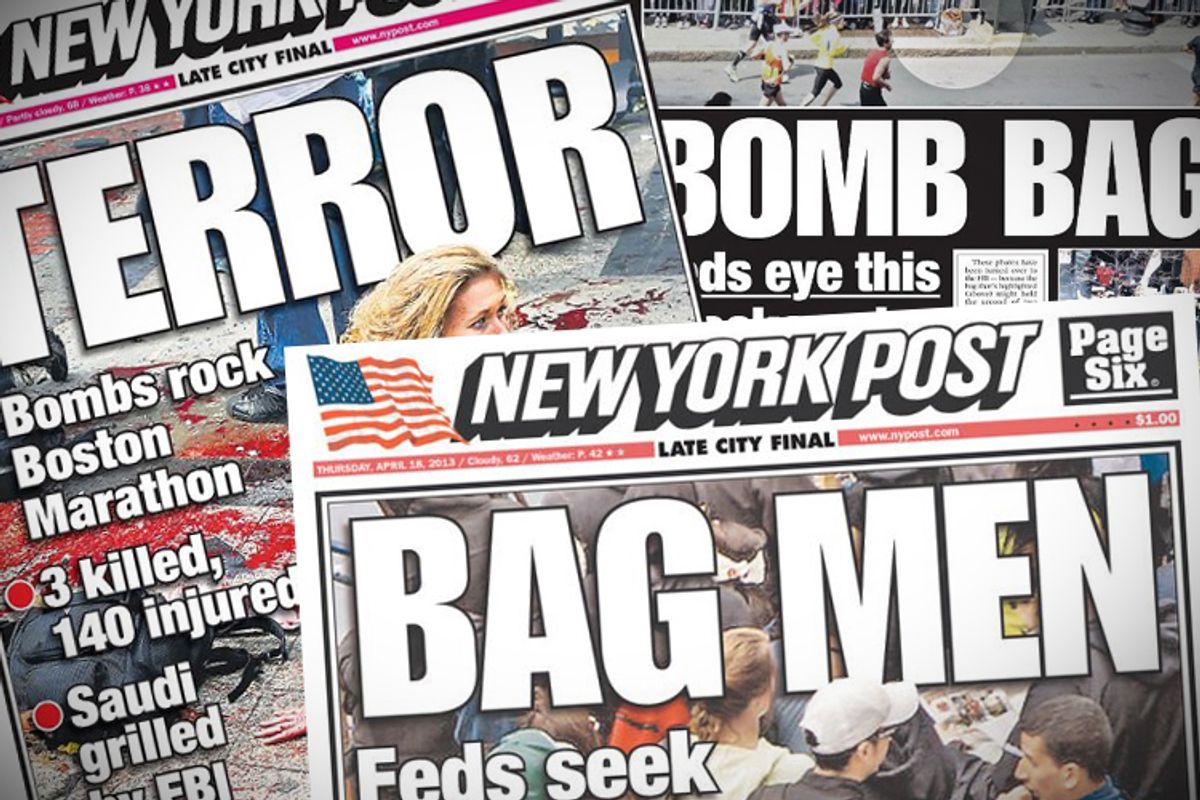 I used to be a daily buyer of the New York Post, the daily paper known for a sense of venality and trashy fun. I was working at the time for a weekly newspaper and reading the daily slate of celebrity gossip, and the Post, though it didn’t provide ideas per se, dosed me with a jolt of energy I couldn’t have gotten from coffee. The Op-Eds, by folks like Rich Lowry and John Bolton, had always been negligible to my reading of it; the gossip was and remains enticing. But what was most intriguing were always the slice-of-life stories that would have been, at most, small squibs in the metro section of the nationally minded New York Times. Exemplary is the cover that ran the day after New York state legalized gay marriage -- it depicted, instead of the earth-shaking news, a picture of a woman saved from jumping off a building by hero cops. (The little joke here -- the biggest news of the day, unremarked upon, hung over this woman’s suicide attempt -- didn’t go unnoticed, but seemed funny and not deeply weird.) Little Upworthy-style stories of human triumphs or, more commonly, dark stories of misdeeds and ill fortune and small-scale political graft reminded me that I lived in a big and porous city, full of events entirely opaque to me but for the 30 minutes a day spent reading the paper.

I stopped buying the Post after it refused to back down from its “Bag Men” cover -- and haven’t looked back. It wasn’t so much that I was protesting the newspaper, or boycotting it; it just didn’t, and still doesn’t, feel right to get news from a source with such a semantic sense of “true” and “false.” As readers will recall, the newspaper printed a cover strongly implying that two young men were involved in the bombing of the Boston Marathon, complete with the headline referencing backpacks and a slang term for criminals and a photo of the men. It then refused to walk its story back, claiming that “The image was emailed to law enforcement agencies yesterday afternoon seeking information about these men” -- without noting just how many photos of other people, not of Middle Eastern descent, might have been in similar photos.

The hits kept coming -- among them the Post’s horrifying treatment of a dead Brooklyn landlord, whose death the paper didn’t so much report as revel in with display copy asking “WHO DIDN’T WANT HIM DEAD?” The Post refused to walk that back, either -- claiming, “The Post does not say Mr. Stark deserved to die, but our reporting showed that he had many enemies, which may have led to the commission of this terrible crime. Our thoughts and prayers are with the family at this time of loss.” If that’s how the Post shows its thoughtful, spiritual side, one would hate to see it actually expressing vitriol.

One sees that side -- the venal, indefensible side -- once again in the paper’s coverage of Eliot Spitzer and Lis Smith. This doesn’t have the import of life or death or terrorism, which is just the point. The coverage has consistently treated the relationship between a man going through a divorce and an adult woman acting of her own free will as not just politically interesting (he’s the former governor who ran for municipal office in New York last year and lost; she worked for his campaign) but somehow morally revolting. They published a story about his “sucking her toes” on a vacation; the pair were compelled to respond with receipts disproving the story. The tone of the Post’s incessant coverage has, throughout, been slut-shaming in the extreme -- with Smith framed as an “ambitious, youngish cookie [...] us[ing] a married degenerate.”

The whole thing isn’t out of character for the Post; it’s the way the Post has been all along. But where before the Post’s serious misdeeds -- first framing two young Middle Eastern men as terrorists in precisely such a way as to sell papers but to avoid ever having to retract, then yukking it up over murder -- the tone of the Post no longer seems enervating and different but like a foreign country I know I never again want to visit. The ideology of other properties of Rupert Murdoch define them as politically conservative in a manner that is at least useful in clarifying the stakes in the national debate -- Fox News and the Wall Street Journal editorial page, like it or not, do set the agenda. The New York Post’s agenda is just anger, in every direction, all the time. It’s like reading an Internet comment section. There are other places to find interesting stories, places that are guided by virtues other than indulging their pure rage and appealing to yours.