Was the state Democratic Senate majority leader the real target of lane closures at the George Washington Bridge? 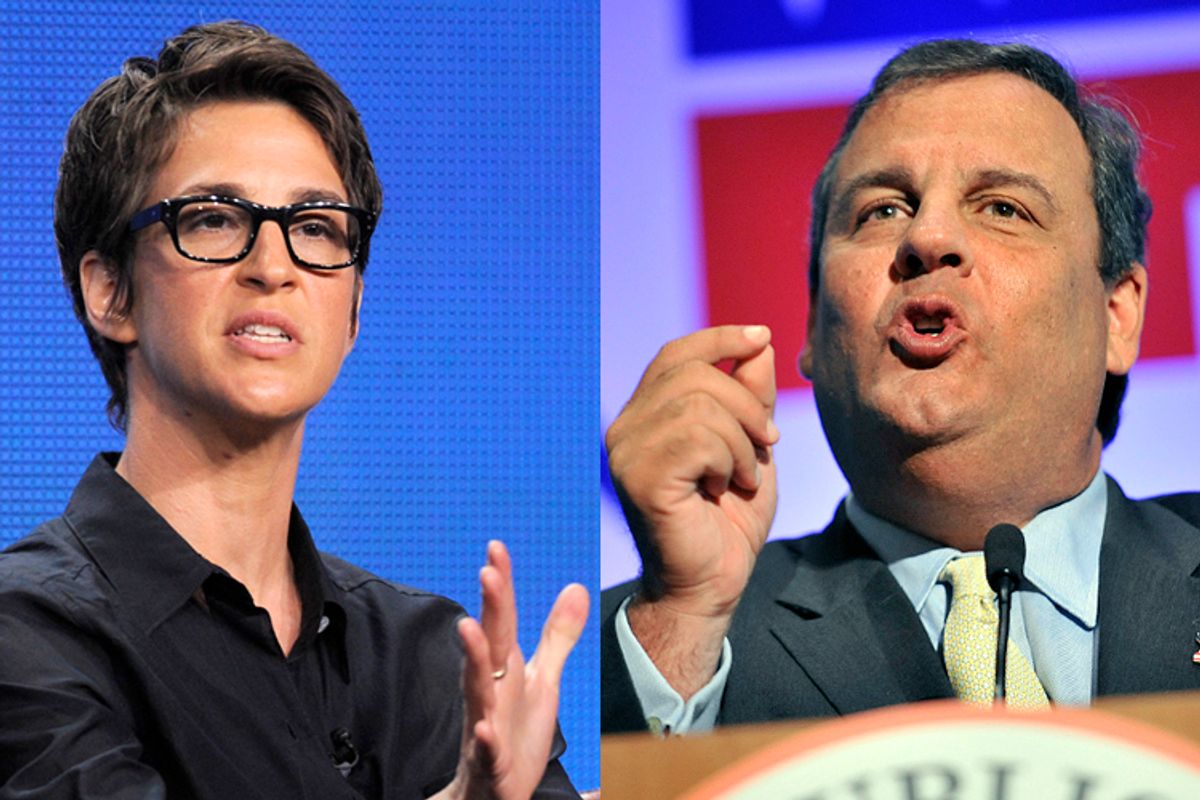 On Thursday morning, New Jersey governor and, until now, Republican presidential favorite Chris Christie gave a two-hour press conference (full transcript here) in which he expressed being "stunned" and "blindsided" Wednesday morning by the blockbuster revelations published that day by Shawn Boburg of the Bergen Record.

The paper's report included email and text messages [PDF] between Christie's deputy chief of staff Bridget Anne Kelly and a number of other top appointees conspiring to shut down lanes of the George Washington Bridge leading out of Fort Lee, N.J., on the first day of school last September. The messages reveal the staffers appearing to enjoying the pain the shutdown was causing the town, joking about the inconvenience to the local children of voters of Christie's gubernatorial opponent in last November's election, and otherwise agreeing not to respond to queries from town officials about the closures.

During the presser, Christie announced he had fired Kelly before it began. He said he had done so because she had previously assured him she knew nothing about the traffic closure that went on for four days in Fort Lee, turning the town into a parking lot and delaying emergency first-responders, among other problems it caused. "I've terminated her employment because she lied to me," he explained on Thursday.

What struck me as odd about his answer to questions about his staff's response to the firing was that he said he hadn't spoken with Kelly since the revelations came out in the paper on Wednesday morning, before she was then fired on Thursday.

"I'm wondering what your staff said to you about why they lied to you. Why would they do that? What was their explanation?" the reporter asked.

"I have -- I have not had any conversation with Bridget Kelly since the email came out," he answered. "And so she was not given the opportunity to explain to me why she lied because it was so obvious that she had. And I'm, quite frankly, not interested in the explanation at the moment."

After his response, I tweeted:

Christie is a former U.S. attorney under George W. Bush. He's a prosecutor who knows how to investigate wrongdoing. He claims that what he "read yesterday" (Wednesday) made him "angry." This scandal's been percolating for months. He's belittled it, joked about it, claimed he didn't think it was a "big deal." But on Wednesday, when he read the emails and texts "for the first time," he realized he'd been lied to by several of his top staffers. He was "stunned," but didn't want to speak to the woman, his once-trusted deputy chief of staff, who sent the original email instructing that it was "Time for some traffic problems in Fort Lee"? Really?

It has also become clear that Christie did not discuss the matter with his two top appointees at the N.Y./N.J. Port Authority either, even though he fired them in early December last year as part of damage control at the time, including the one who actually ordered the lanes shut down after responding to Kelly's "Time for some traffic problems" missive with the simple reply: "Got it."

Why doesn't Christie want to speak to those people if, as he claims, he wanted to get "to the bottom of things" and "spent all day yesterday" trying to do it after being "blindsided"?

Answer: It doesn't seem like he really wants to get to the bottom of things at all. It seems he may already know what's at the bottom, or, in the most generous interpretation, doesn't want to know. I suspect it's the former. Either way, his claims today -- despite his repeated apologies, his expressions of regret and sadness, his assertion that it was "heartbreaking to me that I wasn't told the truth" and his willingness to answer questions for two hours -- don't seem particularly plausible, given the extent to which he has clearly gone to not learn the truth when he had the opportunity to do so firsthand from some of his very closest staffers.

If his deputy chief of staff was in on the conspiracy, along with his campaign manager and his top appointees at the Port Authority and several others, and they all lied to him, as he says, wouldn't he want to find out what else they didn't tell him before cutting them loose? Who else was in on it? For some reason, Chris Christie doesn't appear to want to know.

It makes no sense. Unless he's covering something up. What is he covering up? Maddow may have uncovered a hint tonight.

Until now, the reason suspected for the retaliatory closure of the lanes out of Fort Lee was that it was political payback against the Democratic mayor who refused to endorse Christie in his reelection bid. But other Democrats had also declined to do so. Both Christie and Fort Lee Mayor Mike Sokolich have claimed to be puzzled by that. Sokolich, while acknowledging that he'd been asked for the endorsement, didn't think he was "that important" that the governor of N.J. would exact that kind of retribution when he chose to endorse the Democrat instead. For his part, Christie said during his presser that he didn't "have any recollection of at any time, anybody in the campaign ever asking me to meet with Mayor Sokolich or call him, which was the typical course that was used when we were attempting to get an endorsement."

It does, after all, seem an incredibly aggressive response to a fairly petty matter, particularly given the landslide reelection victory that Christie believed (correctly) that he would have in November.

"I know who I was pursuing as endorsers. I know who was close and we didn't get. I know who was never close or we were trying to get. And know the people we got. This guy never was on my radar screen. And I think he confirmed that last night by saying he was never really -- he doesn't have any recollection of being even asked for the endorsement. And that's -- you know, that's why I don't get this," Christie said during the marathon press appearance on Thursday.

So, if that's true, what was this all about? Was it something else? Something other than the Fort Lee mayor's lack of endorsement? Something that Christie knows about, perhaps? Something that would lead him to not want to have to admit he'd discussed it with Kelly and others before firing them?

Maddow, noticing that Kelly's "Time for some traffic problems in Fort Lee" email was sent to Christie's Port Authority appointee David Wildstein on Aug. 13, 7:34 a.m., wondered what else happened around that time in N.J. that might have spurred Kelly to order the lane closures on the world's busiest bridge first thing in the morning that day?

Here's Maddow's report, finding that the evening before, Christie had unloaded on Democrats in a particularly angry press conference concerning the renomination battle of a N.J. Supreme Court judge, a battle that had been several years in the making. The woman who headed the state Senate committee causing embarrassment for Christie at the time was N.J.'s state Senate Majority Leader Loretta Weinberg (D), who happens to represent ... you guessed it ... Fort Lee ...

The points raised by Maddow are certain to raise many more questions about this entire fine mess, as if there aren't enough already. But, for now, we'll leave those for another day.

After offering her alternative theory, explained above, Maddow interviewed Weinberg about them. Here's that interview ...

I don't claim to be an expert on the man. But, to be frank --- having spent a fair amount of time studying Christie in advance of my 2011 exclusive revealing the secret audiotapes of the secret Koch brothers' summit where Christie was the super-secret keynote speaker --- while he can certainly be thuggish, a blowhard, and somewhat of a bully when he likes, retribution against a Democratic mayor for declining to endorse him in a landslide election seems a bit overboard, even for Christie.

On the other hand, retaliating against the state's Democratic Senate Majority Leader, who he likely saw as causing him no small amount of embarrassment in the NJ Supreme Court matter, does seem more in keeping with his style. Even if he didn't know about it (which is seeming less likely by the hour), his staff surely shared the same frustrations with Senate Democrats that Christie would have (even as he often expertly played Democrats in the state legislature like a fiddle.) Weinberg, for that matter, led the charge in the state Senate after the Secret Koch Tapes story, to pass legislation that would keep Christie from secretly leaving the state again in the future, as he had when he appeared at the Koch Summit in Colorado.

Maddow's alternative theory is smart, good reporting, might make more "sense" out of this entire matter, and is certainly worthy of further inquiry.