Our marriage can't be denied

As one of the first gay couples wed in Utah, Nik and I have become poster children for love, heartbreak -- and hope 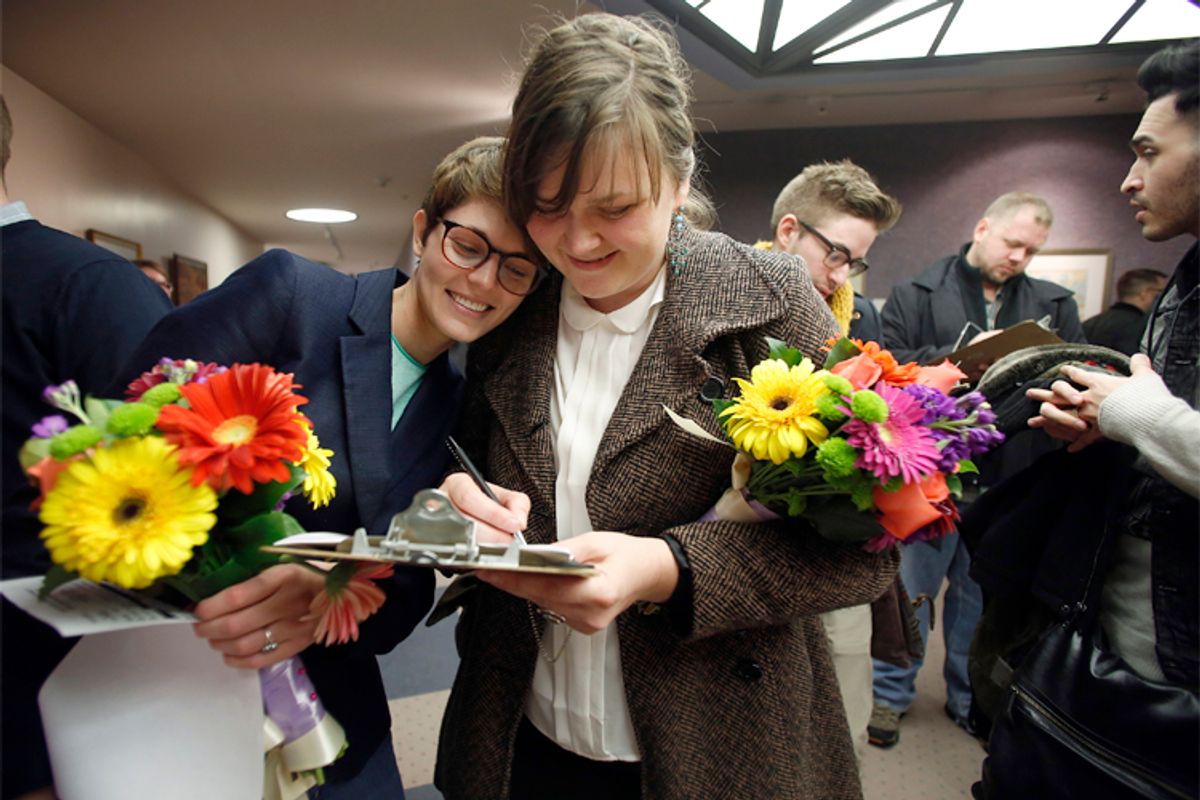 The author, left, with Nicole Christensen as they wait to get married at the Salt Lake County Clerk's office on Dec. 20, 2013. (Reuters/Jim Urquhart)
--

Nik and I had long planned what our wedding would look like: what we’d wear, say, eat. It was to happen outdoors, in the mountains or a meadow. And yet, there we were on Dec. 20, in the drab bureaucratic lobby of the Salt Lake County Clerk's office. I was wearing jeans.

Two hours earlier, I’d been at a white elephant party at our office, and the only thing on my mind was seizing that Awkward Family Photos 2014 calendar, which I snatched from a co-worker in the game’s dying moments. Now, I was vowing to honor my new wife, Nicole, in front of a crush of media, anonymous well-wishers and the mayor. That’s what happens when a federal judge overturns a marriage ban, and you find yourself in a race to wed before sundown. One minute, you’re small-talking the SEO guy over gingerbread; the next, you’re hustling to the county clerk’s office, heart apounding.

When it was our turn in front of the mayor, the hectic lobby went blurry. I was dizzy, probably from shock. My eyes held tight to Nik’s warm, playful gaze; we were in a wind tunnel and had found the one still space. Once declared married, we clasped hands and threw up our arms like Olympic gold medalists. I morphed into the happiest person I ever was.

The Mrs. and I floated along for nearly three weeks like this, bright-eyed and giddy, thrilled that we’d drifted into a wonderful new dimension: one where Utah was the 18th state to legalize gay marriage.

I lived in that dimension for 20 enchanted days. Then, on Wednesday, Utah Gov. Gary Herbert sent a memo to state agencies, ordering that same-sex unions be put “on hold” — breaking our hearts, along with those of more than 1,300 other same-sex couples. On Friday, as I was writing this, news broke that U.S. Attorney General Eric Holder would honor the marriages on the federal level until further court action. Right now, it feels a little bit like we got married on a roller coaster that won't let us off until the Supreme Court pulls the brake.

Nicole and I met two and a half years ago. “I found your next girlfriend,” my friend Kate told me over the phone one day. I guffawed, but she read to me a dating site profile, and the writer’s wit, warmth and impeccable grammar skills told me: Here was a rare catch. We fell in love almost instantly.

I moved away to Idaho soon after, for a newspaper job, but we visited every weekend and spent our weeknights FaceTiming until we fell asleep watching each other’s digitized eyes drooping on our smartphone screens. Nik taught me to garden, and when I moved back to Salt Lake that spring, we planted our own. Our place had no air conditioning, so we moved into a tent in the backyard between our pumpkin patch and melons. We lugged our mattress into the tent, running an extension cord from the house to illuminate our hideout. We read books and listened to crickets. Every night felt like a sleepover.

Part of our connection stemmed from our pasts. We both came of age in Utah County, Utah, likely named that because it’s the Utah-iest part of Utah. It’s a place where you assume the person you’re speaking with is Mormon and Republican.

Being gay wasn’t even a thing, let alone an option, when I was growing up Mormon there in the '90s. Even Webster’s couldn’t tell me what on earth a “dyke” was after a bus bully dubbed me “super dyke” in junior high. I only knew it was something unspeakable and probably true.

I knew I was different — I shunned makeup, wore oversize JNCOs and had the shoulder-length, parted-in-the-middle hair of a teenage male Metallica fan. But a lesbian? Not a chance. There was something despicably wrong with lesbians. Fornication, including homosexuality — we learned in church and seminary — was the second-worst sin anyone could commit after murder. Nik spent her teenage years in the same climate.

Over the years, I managed to figure out what I probably already knew when “super dyke” was first hurled my way.

Mormonism wasn’t holding me back anymore — I’d given that up in my early 20s after reading too many books about early church history. My personal studies were a trip to the spiritual sausage factory. I learned too much.

Plus, I lived in Salt Lake City now, a land unlike Utah County, home of Provo’s BYU. Here’s what people don’t realize about the Beehive State’s capital: Salt Lake City hasn’t had a Republican mayor since the mid-'70s. This town, home of the liberal University of Utah, is ruled by Democrat after Democrat, boasts a big-city arts and music scene and gay rights activists galore.

Bolstered by my more liberal surroundings, I finally mustered the nerve to start dating women at 26. Nik started in her teens. I’m grateful every day that neither of us drank the anti-gay Kool-Aid and married a dude.

In April of last year we got engaged and picked out rings in a vintage jewelry shop. We were a smitten, dewy-eyed couple who planned to spend our lives together. But the thrilling moment when reality shifted -- and our dreams became real -- arrived on a Friday five days before Christmas. We hadn’t seen it coming.

For once I heard news before Nik. Phoning her, crazy-eyed and giggling, it was as if I were an evolutionary paleontologist calling a longtime colleague, someone who had dug alongside me for months in African dirt under a sadistic fireball of a sun, to cry into her ear that I’d — no, we’d —found it: the missing link.

It was Nik’s idea to get married right then. She’s the type who’s got to be first. So we jumped in our red hatchback, heading to the flower shop to pick up bridal bouquets en route.

“We’re getting married!” we announced to the florist, her eyes widening when we explained why and how. She seemed happy for us and disappeared into the backroom. I paced as the minutes ticked away, shaking as I read updates on my phone. The state was seeking an emergency stay of the ruling. Weddings could be halted any minute. Plus, it was Friday at 4 p.m. How late would the county remain open and what if something happens over the weekend? And mostly: Why is it taking so long for the freaking flowers?!

“Should we just go?” I kept saying as Nik poked her head into the backroom to check the progress. “Really. I think we should go.”

Nik was dead-set on the bouquets.

The longest 20 minutes of my life ended when the florist returned at last, presenting two identical bundles of gerbera daisies and roses. They were gorgeous and seemed to add a touch more legitimacy to our still-up-in-the-air nuptials.

Despite the bouquet scare, we arrived at the county building having beaten to the altar both the mad dash of hopeful brides and grooms and the feared stay.

It was odd. So much different than I’d ever imagined. I said “I do,” hiding in Nik's eyes, pleading with myself to “live in the moment” even if nothing seemed real. And that’s when I kind of blew it. We were pronounced married, and I leaned in for a … hug!

“People are watching!” and “We’re lesbians!” were unfortunately the thoughts I didn’t have time to think but just knew by muscle memory. Nicole corrected me, planting me with a kiss.

Over the next week, we got messages from friends across the country: They’d seen our triumphant photos everywhere from BuzzFeed to the Washington Post to MSN. I’ve worked as a journalist, but I’m a private person, and it was embarrassing to be caught mid-sob and to have such raw moments become public. But we were thrilled to be married, and I accepted that my face was among those that told the joyous tale of the blood-red state of Utah taking giant leaps of progress for mankind.

Besides, other couples had a rougher go of it.

That first night, Salt Lake County remained open late, but many couples arrived too late and had to wait in suspense over the weekend. The sickening dread of a stay, of something going wrong — the ruling was too good to be true! — consumed the couples who didn’t make it in time Friday afternoon. It was like my Bouquet Wait times 1,000.

That weekend, it was announced that the judge who overturned the ban would consider a stay at 9 a.m. on Monday. The county building was set to open at 8 a.m. If the worst-case scenario occurred, that left just one hour for weddings. The message circulating on social media: Get there early!

Sunday was a frigid night, and at 11 p.m., Nik and I were shocked to learn that couples were already lining up outside the county building in hopes of marrying first thing. I glanced out my living room window and shivered. Could it be true?

Nik wanted to bring coffee and doughnuts to the couples outside. Her friend had a big box of hand-warmers she didn’t need — so we three headed into the night.

And there they were. It wasn’t even midnight, and already at least 80 people had set up two lines leading to the building’s two entries. They sat on folding chairs and huddled in blankets. Some looked like they’d suited up for a trek from Everest Base Camp. From a distance, they could’ve been a bunch of people waiting overnight to audition for “American Idol.” Up close, the queue had an AARP vibe. Most of the people hoping against hope were in their 40s, 50s and 60s.

“We got married on Friday,” we told a group of older lesbians as we poured coffee.

“Lucky!” and “Congratulations!” they called out. You could hear the eagerness and fervor in their voices. They wanted what we had. Bad.

Please don’t grant a stay, I thought, nausea almost knocking me off my feet as we headed back to the car in the darkness. And these stalwarts got their notarized proof that they were committed to each other for forever. The stay didn’t come.

Until it did, as we know, a couple of days ago. When Gov. Herbert announced that the marriage licenses issued during the window of legality won’t be recognized by the state, it felt like Herbert mugged us and ran off with our dignity — not to mention our benefits of joint tax returns, inheritance and insurance. On its Facebook page, the Advocate posted an image of Nik resting her head on my shoulder. It was a shot of us waiting in line for our license on that fabulous Friday, the same photo that had been spread triumphantly a few weeks ago. Above the photo were the words: “(Heart)breaking news out of Utah.”

And on Friday, our image was back in the news again -- for joyous reasons this time. I'm honored to be among the faces of hope once more, but who knows where this goes from here? Alas, in any marriage, you never know what's coming. I know I have Nik beside me, for whatever happens next.

Natalie Dicou escaped the newspaper business in 2012 in favor of a wild ride of politics gigs. She writes and edits from her home in Salt Lake City and is writing a top-secret book.