"The Accidental Universe": Physics overthrows itself 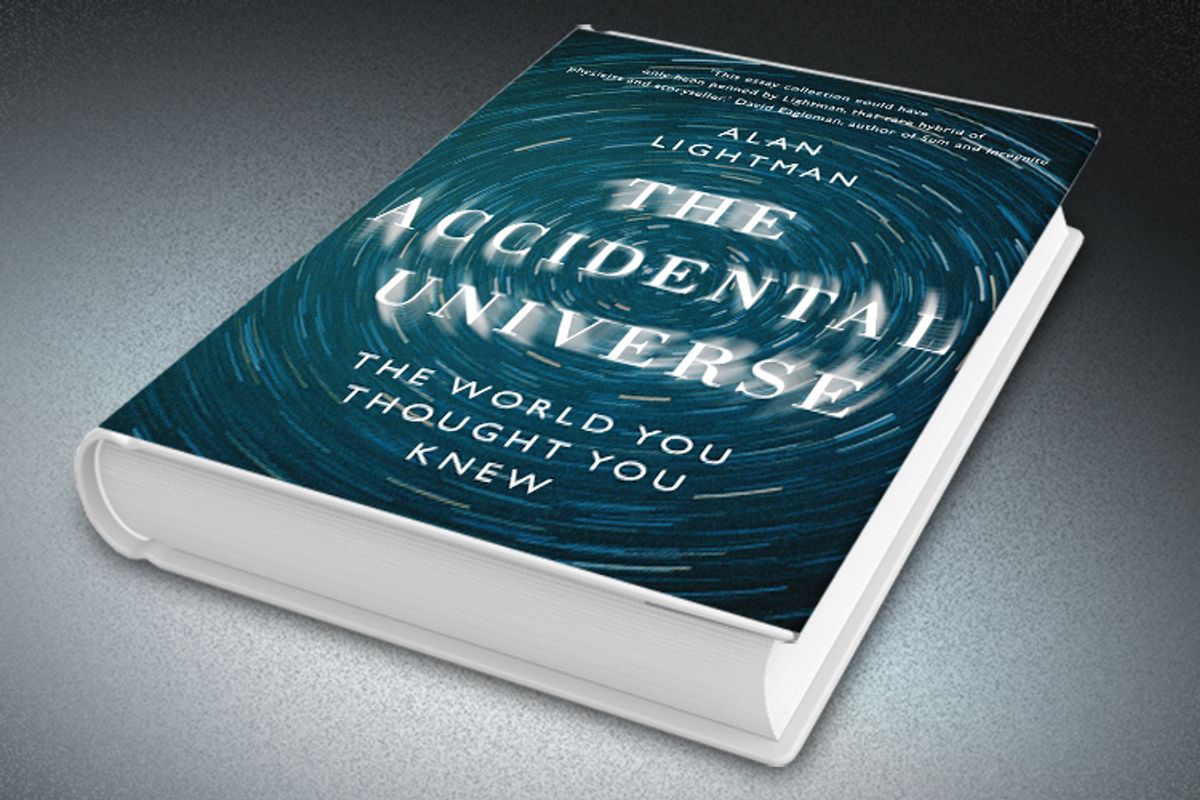 As MIT's first professor with a joint appointment in science and the humanities, Alan Lightman sometimes found himself teaching physics in the morning and then walking across a courtyard to lead a fiction writing class in the afternoon. He'd go from speaking to students about "a world of pure logic, pure reason, pure cause and effect" to coaching them on how best to evoke "the messy nature of human affairs." Lightman, a physicist turned novelist ("Einstein's Dreams" was a bestseller and "The Diagnosis" was a finalist for the National Book Award), is like a one-man bridge between what C.P. Snow, in 1959, famously described as "the two cultures" of the sciences and the humanities, realms of knowledge whose growing estrangement Snow deplored.

In his new collection of essays, "The Accidental Universe: The World You Thought You Knew," Lightman explores the way recent (and not-so-recent) discoveries and theories in physics and cosmology affect the sort of questions human beings ask in fiction: questions about the meaning of life, the nature of morality, the importance of love. These are obviously puzzles that concern many physicists as well as novelists. But even those scientists who excel at penning lucid popular explications of their work are rarely as gifted at articulating the "messy" bits, such as the contradictory human desires for order and transgression, or our delusory longing for permanence. Some of what Lightman writes about in "The Accidental Universe" could be called philosophical or metaphysical and some of it verges on the poetic, but whatever the subject, he writes with a limpid serenity and frankness that feels as fresh and as clarifying as a spring rain.

All of the essays in this collection are rewarding, but the most intriguing for popular science lovers will be the first, which gives the book its title. Lightman explains the emerging consensus among theoretical physicists that our own universe is only one among countless alternate universes, universes where the properties of matter and energy may differ significantly from our own. Physicists call this "the multiverse."

If the multiverse concept is true -- and, as Lightman points out, it's hard to believe we'll ever be able to conclusively test it -- then, he writes, "the philosophical ethos of science is torn from its roots." That ethos rests on the conviction that science is moving us toward a more and more complete understanding of the laws of nature and that "these basic principles are so restrictive that only one self-consistent universe is possible, like a crossword puzzle with only one solution." Or, as the Nobel-winning physicist Steven Weinberg put it, "We now find ourselves at a historic fork in the road we travel to understand the laws of nature. If the multiverse idea is correct, the style of fundamental physics will be radically changed."

The multiverse also offers a refutation of the concept of Intelligent Design. Like Intelligent Design, the multiverse is an idea that accounts for the fact that the universe we inhabit is finely tuned in various ways that permit the existence of life. If certain factors (such as the amount of dark energy in the universe) were a little bit greater or lesser -- poof! But if there are an infinite, or nearly infinite, number of universes, some of which are nothing but a cold fog of evenly dispersed particles and others a single, tiny, infinitely dense point, then ours is merely one of a few universes configured so as to allow life. There's nothing particulary remarkable about our existence in it, because if it were otherwise, we wouldn't be around to remark on it. Thus, ours is an accidental universe, rather than the inexorable and inevitable result of set laws that can be discovered and understood by humanity.

Other essays in this collection ruminate on such themes as entropy (the universe is moving inexorably to a state of zero energy and eventually it really will be a cold fog of evenly dispersed particles), the compatibility of religion and science, symmetry, the unfathomable size of the universe and our conflicted feelings about the physical laws that determine it. Unlike the multiverse, however, these ideas are not new or currently nibbling away at the foundations of theoretical physics in a way that causes the discipline's best minds to make bleak, sardonic remarks about the illusion of logic.

Nevertheless, they still represent burning mysteries for many, many thoughtful people and Lightman unfolds them with great skill and sensitivity. In the book's final piece, he ruminates on how the physical sciences have moved beyond observations that can be made by our unaided senses and come to rely entirely on devices that can measure the world more accurately. And then he points to the irony that the discoveries made using these devices have enabled the technology (smartphones, the Internet) that now seems to be removing even non-scientists from direct contact with the material world.

Especially welcome is Lightman's repudiation of the strident, even mocking certainty espoused by some self-appointed crusaders for the scientific worldview against what they view as the plague of religion. "I am an atheist myself," he writes. "I completely endorse the central doctrine of science. And I do not believe in the existence of a Being who lives beyond matter and energy, even if that Being refrains from entering the fray of the physical world," as does the deity of deism and what Lightman calls immanentism, the sort of God envisioned by both Spinoza and Einstein. But "I believe there are things we take on faith, without physical proof and even sometimes without any methodology for proof. We cannot clearly show why the ending of a particular novel haunts us ... We cannot prove the meaning of our life, or whether life has any meaning at all." Some evolutionary psychologists seem to be doing their darnedest to prove Lightman wrong in that, but even their theories require a certain amount of belief in what can't, ultimately, be proven.

Perhaps Lightman contradicts himself, but "these are not easy questions, and I have wrestled with them for much of my life" -- an admission that, in the cartoonishly polarized climate of such debates today, qualifies as a moment of welcome maturity. When it comes to the mind-body problem and the idea of free will, he writes, "Given a very large computer and the known laws of nature, can we predict the person’s answer to each of [a set of] questions? Although I am a scientist myself, I would hope not." Yet, "I cannot explain exactly why."

Perhaps its the novelist in Lightman that loves mystery and ambiguity, but somehow, I think not. The scientist in him loves them as well, and could not express that love more perfectly than this: "I believe that it is bracing and vital to live in a world in which we do not know all the answers. I believe that we are inspired and goaded on by what we don’t understand. And I hope that there will always be an edge between the known and the unknown, beyond which lies strangeness and unpredictability and life."