The fake war on grandma kisses 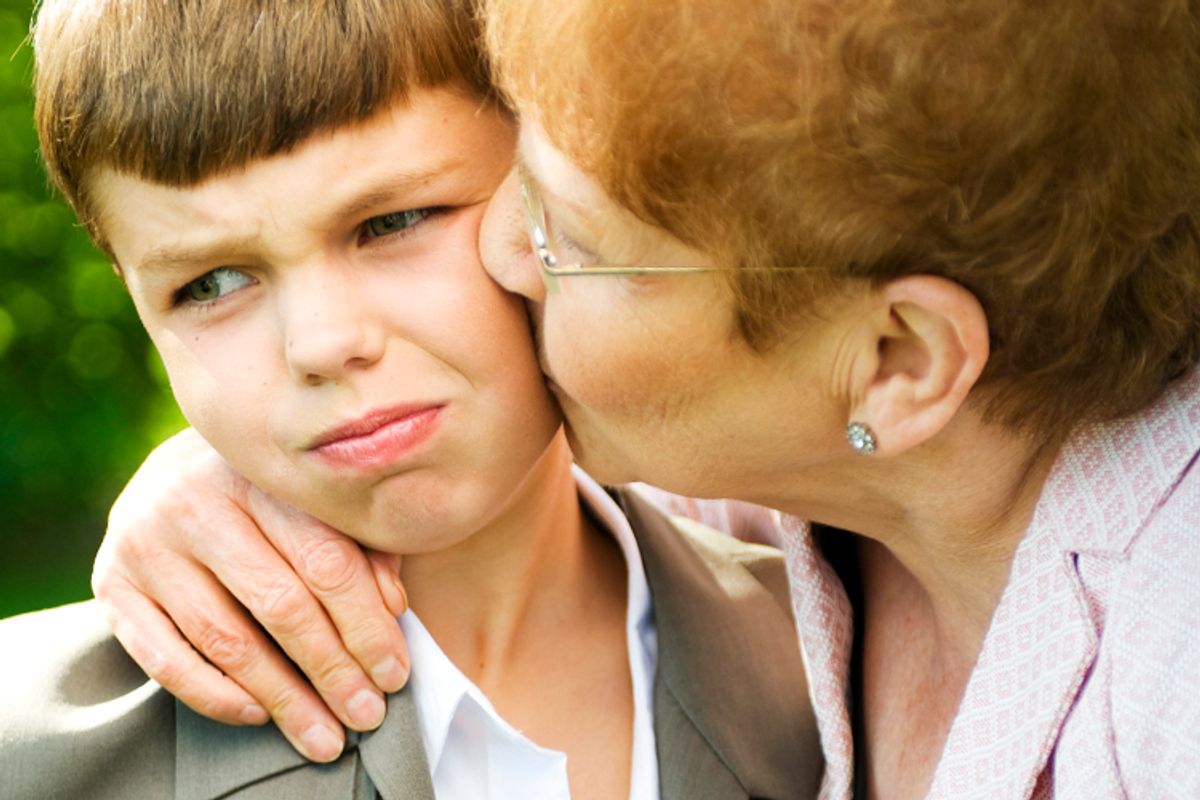 It's a scene often played for laughs and revulsion: An elderly relative leaning down with arms outstretched, demanding of a squirming child, "Gimme a kiss!" Sometimes it's a toothless grandma, other times it's a creepy uncle. Either way, a sex educator in the United Kingdom recently warned that forcing a reluctant child into doling out that cheek peck is harmful -- and that it might make them more vulnerable to sexual abuse.

In a dispatch for the Sex Education Forum, Lucy Emmerson argued that learning about consent "starts from age zero" and that "much is learned by young children from everyday experiences about whether or not their opinion is valued, and if they have any control over physical contact with others." For a child showing discomfort with a cheek kiss, she recommends "suggesting alternatives to the child such as a high-five, a hug, blowing a kiss or a wave."

This advice has apparently led to an "outcry," the only immediate evidence of which was two quotes from critics in the Daily Mail, an illustrious publication with a thing for pseudo-dramz. One critic told the Mail, "The Sex Education Forum is trying to take any kind of human feeling and kindness out of the way we bring up children and that's really sad." Soon the Mail had another critic jump in with an angry op-ed: A sex abuse campaigner went so far as to suggest that Emmerson was attempting to “ban” or “dissuade” grandmothers from kissing their own grandchildren. War on grandma kisses! It’s like the new war on Christmas.

Beyond the dominant storyline of "political correctness run amok," there is the bad-mom angle (at least in the way Emmerson's words are being warped by various media outlets). It's just the kind of "you're doing it wrong" parenting story that does gangbusters on Facebook. The sort akin to, "Child chokes to death on popular toy" or "Cozy kid-pajamas spontaneously combust." That thing you think is good and normal is harming your child!

Let's all take a deep breath and talk about this rationally. After all, we're all adults here, right? (And if we're not, go tell your parents that they're ruining your life by letting you read Salon unsupervised.) First, facts. David Finkelhor, director of the Crimes Against Children Research Center, tells me that Emmerson's view that, as he put it, forcing kids to kiss relatives makes "it easier for abusers to compel children to engage in sex acts" is not backed up by hard evidence. "I don't know of any research that supports this assertion or the efficacy of this teaching point," he said. That doesn't mean that it's wrong, but it does mean that there isn't proof.

The thing is, experts don't disagree on whether it's OK for children to cheek-kiss their relatives. That should be said a hundred times over. This is not an attack on grandma-smooches. There is a consensus that it is perfectly healthy for a child to give grandma or grandpa a smooch. There is also generally a disapproval of forcing a child to kiss a relative -- forcing being different from asking. (Although, as you'll see, there are differences in rhetorical emphasis on force, as well as definitions of it.) The largest point of contention is over the connection to sexual abuse.

For example, Maureen Healy, author of "Growing Happy Kids: How to Foster Inner Confidence, Success and Happiness," says plainly that “children are not to be forced to kiss family members," and connects such coercion with abuse. "It's not a one-to-one connection regarding forced kissing family members and exposed risk," she says. "By forcing something on children it is denying that a child has inner wisdom and is teaching them not to trust themselves. When kids don't trust themselves they do tend to make poor choices and this may include putting themselves in a problematic situation."

On the other hand, Kathy Seifert, a forensic psychologist and "youth and family violence" expert, is more cautious. "If a child protests too strongly, don't push them to do it and don't make a big deal out of it,” she says. “That is just normal socialization. But that does not mean that children should not be asked or encouraged to kiss relatives in general. Use common sense.” But she denies any link to sexual abuse. "Kissing relatives does not have anything to do with future risk of sexual assault, which is more often related to domestic violence, abuse, and neglect in the home," she says.

Those with experiences of being made to kiss a relative are similarly divided. I put out a call for people with experiences of being forced to kiss relatives. I heard from Gareth, a 31-year-old who grew up in the country and remembers a routine around a ”kissing gate,” which stops livestock but not people from passing. “My nan always made me kiss her on the cheek either side of the gate,” he said in a tweet. He followed up in an email: “For me, it was a sign of affection; I'm from a very loving and emotionally open family so it was -- and still is -- the norm for me.” No trauma there.

But then I heard from “Jane,” a 41-year-old who was molested by her mom’s boyfriend at the age of 10. She was made to hug and kiss relatives, despite her own strong and repeated objections. “I truly believe the two are related,” she says. “I think being forced to hug and kiss after a while overrides the natural warning signals we were born with.” She added, “It's my opinion that children shouldn't be forced to show affection for anyone if they are uncomfortable. It's too important they learn to be in charge of their own bodies, and trust that if something doesn't feel right don't do it.”

These two cases are apples and oranges, though. Gareth's being "made" and Jane's being "forced" are completely different. Grandma saying, “Give me a kiss!” is not the same as a parent belligerently, even physically, pestering a crying child to kiss a relative or else. There's also a great difference between a parent repeatedly telling a learning tot to "kiss grandma!" while making instructive smacking noises and a parent ordering a child to kiss grandma even after the kid has clearly displayed reservations and discomfort.

The subtler nuances of when a parent’s urging a kiss goes from socially constructive to unhealthily coercive are tough to define in the abstract. As my friend Page, the mother of a toddler, tells me, “Maybe your kid's being a fuckhead and needs to be told to kiss his grandmother. Maybe he's genuinely nervous for some reason of his own that has nothing to do with the grandmother but should nevertheless be respected. Maybe the grandmother is nefarious in some way the parents are unaware of.” That is the thing about parenting: There are few appropriate blanket prescriptions -- and yet there is a lot of parental anxiety about getting it just right. That's why debates like these have so much traction.

The thing about this that makes me want to swear off of the human race altogether is that poor Lucy Emmerson made these remarks while trying to highlight how sorely lacking sex education is in schools -- and that is the one issue that isn't being talked about.