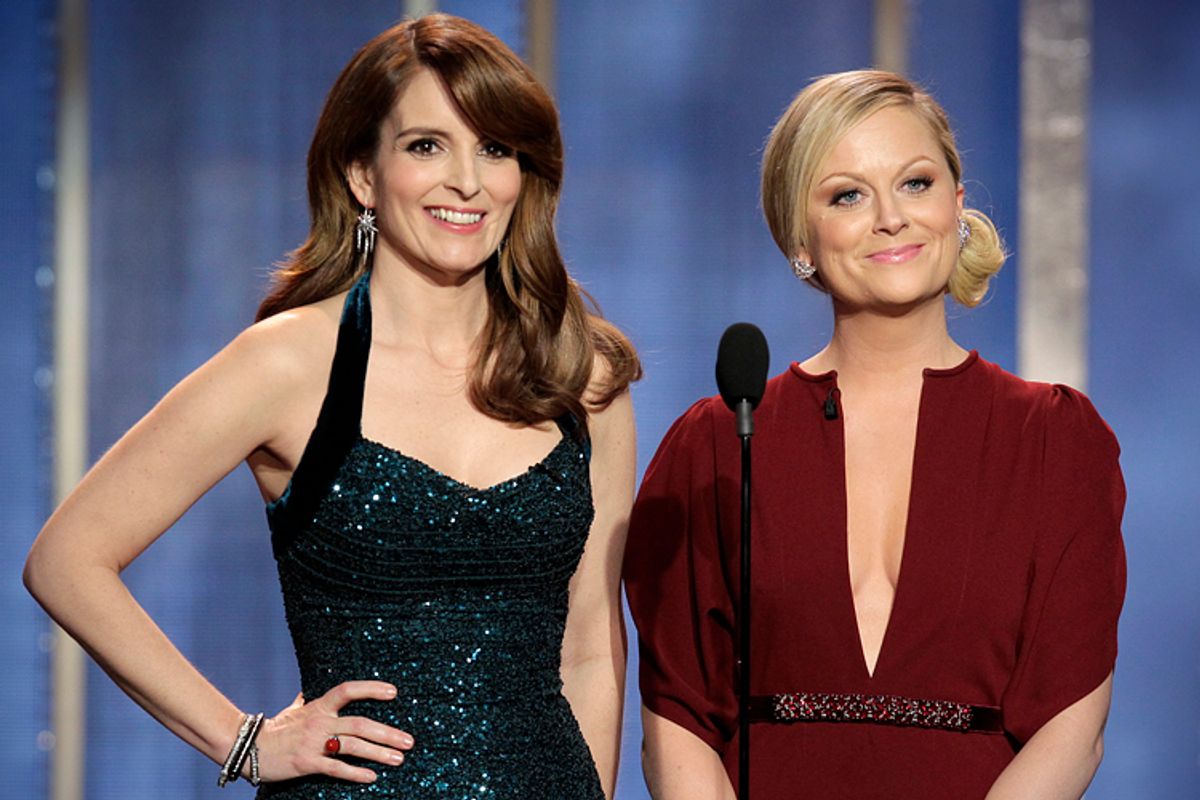 The last time they hosted the Golden Globes, in 2013, Tina Fey and Amy Poehler came in for something new for them: coverage in the tabloid press. They'd joked about Taylor Swift's tempestuous and much-remarked-upon love life (with Fey telling her to "stay away from Michael J. Fox's son," who was onstage as "Mr. Golden Globe" that evening). Swift made it clear that she found the comedians' actions not just hurtful, but anti-feminist: “You know, Katie Couric is one of my favorite people. Because she said to me she had heard a quote that she loved, that said, ‘There’s a special place in hell for women who don’t help other women.’”

This was unusual for its format -- celebrities generally hadn't called the amiable Fey and Poehler out -- but not for its content. Indeed, it crystallized a sense in the culture that the pair were somehow doing feminism a disservice through their comedy and public images.

It's both strange and exceedingly obvious why two of the most explicitly and publicly feminist celebrities (Poehler's response to Swift included the phrase "I am a feminist") come in for so much criticism along feminist lines. Many if not most female celebrities tend to dodge questions regarding equal rights, choosing to either express their beliefs in their art or to just leave the matter entirely alone. "I'm not a feminist, but ..." has become a cliché -- and those who utter it can be appreciated on many grounds, but one doesn't stake one's appreciation on whether their further statements are good or bad for a movement they've already disavowed. Meanwhile, Poehler runs a YouTube channel intended to inspire young girls, while Fey's memoir "Bossypants" was in large part about her work creating a "Saturday Night Live" writers' room that empowered women.

It has historically been difficult, for instance, for Fey's fans to square her extraordinary achievements in comedy with her choice to portray a character who looks just like her, on "30 Rock," as borderline unlovable, obsessed with food, and deeply unhappy. Many of her fans, as Rebecca Traister wrote on Salon in 2010, found Fey's criticism of other women and her portrayal of a single-woman character as a total loser somewhat uncomfortable. Blogger Sady Doyle coined the term "Liz Lemonism" to describe a variety of feminism practiced by straight white women who are deeply concerned with their own oppression and blind to all other varieties. It's the #solidarityisforwhitewomen argument, the idea that those who already possess social capital and advantages sometimes fight for their own rights while ignoring or mocking others.

This isn't hair-splitting -- if Fey is to be a standard-bearer for modern feminism, it might be useful to hold her public statements and her art up to the light in order to better understand how to move feminism forward. But she never asked to be; nor did Poehler, who disappointingly declined to respond to a question about the controversy over race and "Saturday Night Live's" hiring practices. They are feminists, sure -- but the fact that they are The Feminists is symptomatic of Hollywood's lack of imagination. They wouldn't need to be all things to all people if there were more people as outspoken as them on the stage, running and performing in network sitcoms, hosting awards ceremonies.

It's impossible to think of any two people who so precisely exist at the intersection of fame and outspoken advocacy on behalf of themselves and their gender as Fey and Poehler. But fans of theirs who want to see change in the pair's rhetorical style should consider not merely that Fey and Poehler are comedians. They also are in an extraordinarily difficult position, one created by the entertainment industry's unwillingness to let outspoken women on the stage. Whatever they say will get critiqued for its divergence from whatever is most socially conscious far more than would an anti-feminist statement from a pop star.

Maybe they'll crack a joke that falls short of fans' expectations Sunday night, or criticize a female celebrity in a way that sets teeth on edge, or act in a manner that's blinkered by their own experience. All the more reason to seek out more talents from all different backgrounds, not to replace Fey and Poehler's talents, but to augment them.