Chris Christie's forgiving fan club: Why elite "centrists" will back him all the way 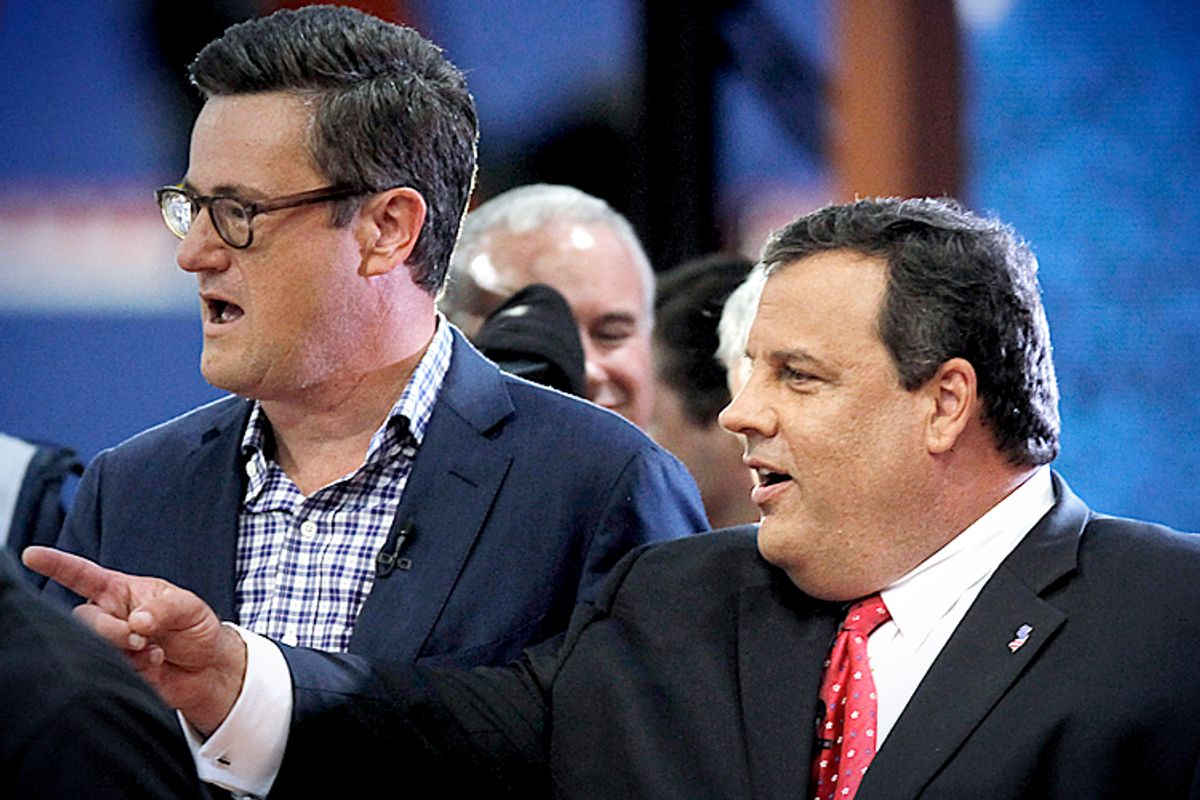 What would Chris Christie have to do to get his admirers to stop admiring him? Put aside for a moment the question of whether he personally instigated or even knew of the intentional traffic slowdown his aide and appointee caused as retribution against a New Jersey mayor. The closure was carried out by a top aide and some of his closest longtime political allies. These are his people, and this is the culture and ethos he has brought to his administration. Petty retribution against enemies -- and favors for friends, no matter how reckless or criminal -- is the norm in Christie's administration. What is unusual in the bridge controversy is not that it happened, but rather how sloppy his allies were in covering their tracks and shielding their boss from negative press. But will any of this actually hurt the man with the people who love him the most?

First, you have to understand the source of the Christie love. As a rich Northeastern Republican, with the typical rich Northeastern right-leaning Republican's hard-line right-wing economic agenda, combined with certain less stringent positions on various other issues, elite "centrists" were already inclined to like him. But Christie is basically the dream candidate of the masculinity-obsessed middle-aged male centrist-worshiping pundit. He's "tough," because he shouts at people. He's "brave," because he supports various broadly unpopular positions related to government spending and taxing. And he's also a "reform-minded" "moderate," because ... well, because centrist pundits say they like reform-minded moderates and they like Christie so he must be one of those. The fact that all this was wrapped up in a Jersey accent gave him supposed populist cred, despite his elite background.

Christie knows full well that this class is his most loyal constituency, and he knows it's them he most betrayed by ... getting caught acting like the sort of politician he is and always has been. When the news broke, they were initially heartbroken.

Ron Fournier, a right-leaning centrist fetishist of the highest order, likes Christie and wants him to succeed. He projects onto Christie all of the traits that he admires in politicians. As of Thursday, Christie had failed to live up to Fournier's vision, so Fournier simply imagined a way in which Christie could emerge from this scandal still receiving the admiration of people like Fournier. It involved the phrase "pull a Super Sister Souljah," because for Fournier and his ilk, the wisest decision Bill Clinton ever made was denouncing a rapper and activist who wasn't in any way involved in the Clinton campaign, for having said provocative things about white people. Fournier called on Christie to denounce ... himself, somehow, because the Christie in Fournier's imagination would certainly denounce a governor who allowed this tawdry affair to happen.

On MSNBC last Thursday, Joe Scarborough and Mika Brzezinski talked like betrayed friends, which they are. Christie's two-hour press conference was designed to appease them, and Ron Fournier, and all the rest. He basically ticked off the boxes in a "scandal response" checklist designed by someone like Mike Allen: Apologize profusely, accept full responsibility, take every single question. The early reviews were good! Andrea Mitchell called it a "bravura performance." Mark Halperin called it "virtuoso."

Remember that these people want to like Christie, so they will find a way to continue to like Christie. They will continue, as well, to imagine that he is someone he is not (the imaginary Christie is a sort of blue-collar Jon Huntsman who is maybe also an ex-ballplayer and who drinks Budweiser out of cans with mechanics by night and slashes capital gains taxes by day). On Friday, the "Morning Joe" gang decided that the real scandal in Christie's office was Barack Obama's administration. That's what Brzezinski decided after talking to Christie on the phone after his press conference:

"He said that when he got off the podium he did not know how much time had gone by 'cause he was gonna answer every question, nothing to hide, some things he can't answer until he knows more but he wanted to put himself out there," she said, adding that the "New York reporters" at the press conference did not "coddle" Christie.

So, yes, the strategy worked. The only problem now is if anything Christie said last week turns out to be untrue, or if more incidents like this one emerge soon. Even then, it'll be easy enough to say that Christie faced the music, and is now the victim of a witch hunt from sore loser New Jersey Democrats.

With a bit of time to forgive and forget, I don't think Christie needs to worry much about losing the Scarboroughs and Fourniers of the political establishment..

It's been more interesting, really, to watch this play out in the conservative press. On the right, Christie is beloved by the "establishment" conservatives and detested by the grass roots (or, you know, the "grass roots" as represented by various talk radio hosts). On the one hand, the instinct to close ranks and screech about media bias whenever a Republican is in trouble is powerful, but on the other, the further-right seems willing to use this to pummel a man they (correctly) believe the establishment has already anointed as the 2016 nominee.

Fox, which is interested more in electing Republicans than conservative purity, totally ignored the scandal, even cutting away from Christie's epic press conference before it finished. The Wall Street Journal, house organ of the rich GOP elite, argues that what Christie did isn't so bad because of the IRS scandal, which doesn't make much sense, but they don't have a lot to work with. The National Review's Andrew Stiles seconds the comparison. Karl Rove and Reince Priebus are dismissing the entire scandal in exactly the way you'd expect two professional Republican operatives to.

Ah, but the National Review's Andrew C. McCarthy is taking the controversy quite seriously, asking tough questions about Christie's conduct and past statements. That would be the Andrew C. McCarthy who was outraged in 2011 when Christie called people who obsess over the imaginary threat of Shariah law in the United States -- people like Andrew C. McCarthy, that is -- "the crazies." Likewise, Rush Limbaugh jumped on the claim that Christie lied about when he learned about the scandal. Drudge was brutal last Thursday. "Christie Helps Obama Again!" says the Blaze.

This is the problem with winning over the elite before you work on the base: When you fuck up big time, the base is less likely to dismiss it.