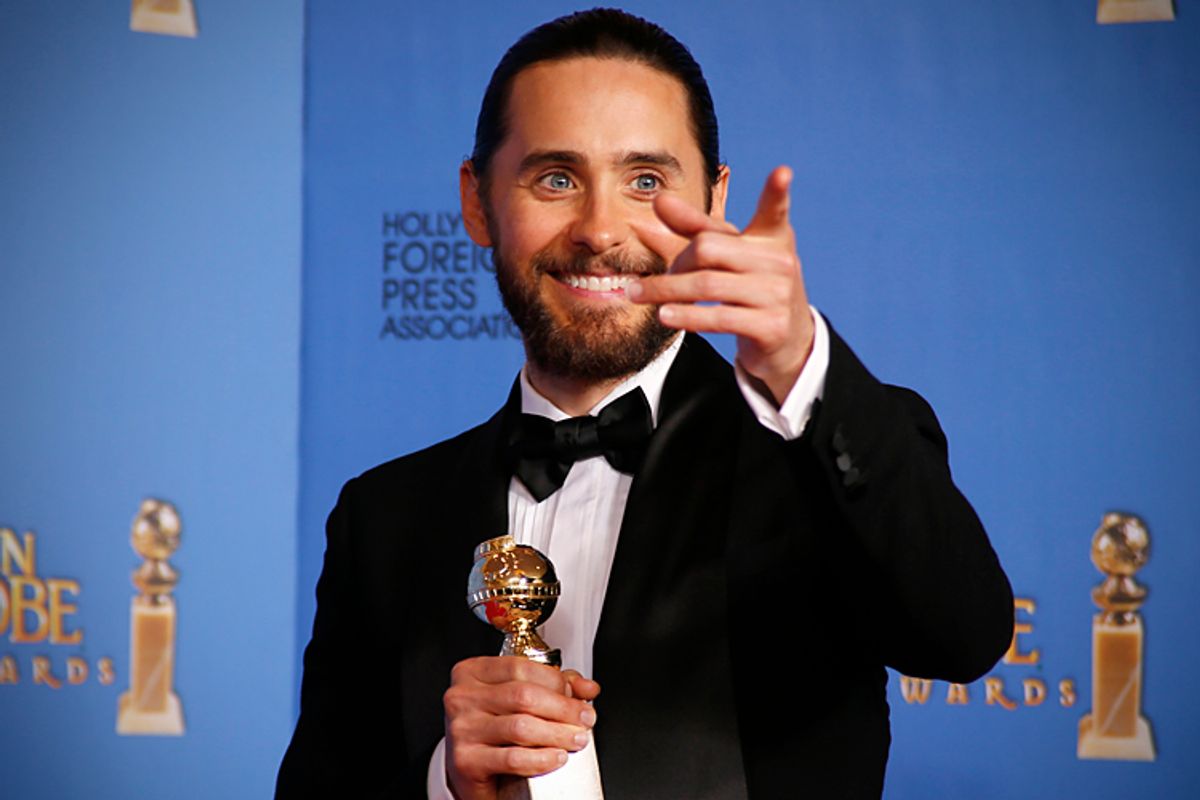 In 2013, the actors Jared Leto and Michael Douglas, two men who date women, played, respectively, a transgender woman in the film "Dallas Buyers Club" and a gay man in the TV movie "Behind the Candelabra." And tonight they were honored for their efforts at the Golden Globes -- where both men managed to, purposely or not, insult the very communities they were representing on film.

Leto's speech managed to pat Leto on his own back while trivializing actual transgender people -- he played a trans woman with AIDS, at the height of America's AIDS crisis. He began by mocking expectations about his anatomy. "I did not ever use any prosthetics in this film. That tiny little Brazilian bubble butt was all mine." This was all in good fun, but Leto's playing for laughs the process by which he prepared for the role of a person who felt uncomfortable in her body was not, really: "It was a very transformative role. I had to do a lot of things to prepare. One of the things I did was wax my entire body, including my eyebrows," Leto said to the audience's laughter.

It's an actor's job to prepare for a role in whatever way the script demands; it may have been difficult for Leto to wax his entire body, but it's sort of a weird punch line for a person whose entire role was about body discomfort and the painful modifications one must make to feel OK with oneself. Leto got money and at least one award for playing his part in "Dallas Buyers Club"; it's strange that he didn't take into account the notion that his struggle was not, in fact, the most important one involved in his role.

For those who think I'm reading too much into his speech at the Globes and his "Fresh Air" interview in which he called his character "transgendered" and said the film had no political valence, I'd point to the fact that neither Leto nor his fellow winner Matthew McConaughey mentioned AIDS once in their respective speeches. These two men devoted months of their lives to a project specifically about the AIDS crisis, and then went off on tangents when accepting awards for their work about how goofy and weird it is to make your body like a transgender person's (Leto's speech) or about how your wife calls you "king" (McConaughey's).

While Leto's speech was just weird and tone-deaf, Douglas' calls the quality of his work into question. Can a person who uses language like "mincing" to describe effeminate gay men find humanity in such people? Or was his performance an elaborate work of caricature whose biographical accuracy fooled us all into thinking Michael Douglas cared about the character he was playing?

All shall, perhaps, be revealed at the Screen Actors Guild Awards, at which Douglas will almost certainly win the final of his three major awards for "Candelabra." What he chooses to say is his own decision. But if the audience wants to seem any different from the benighted Hollywoods of past generations that gave us so many entertainments that look retrograde now, they could choose not to laugh.