How to buy an election: The Koch brothers' 2014 battle plans exposed

The conservative billionaires spent $400 million in 2012. Here's what they're planning for a repeat performance 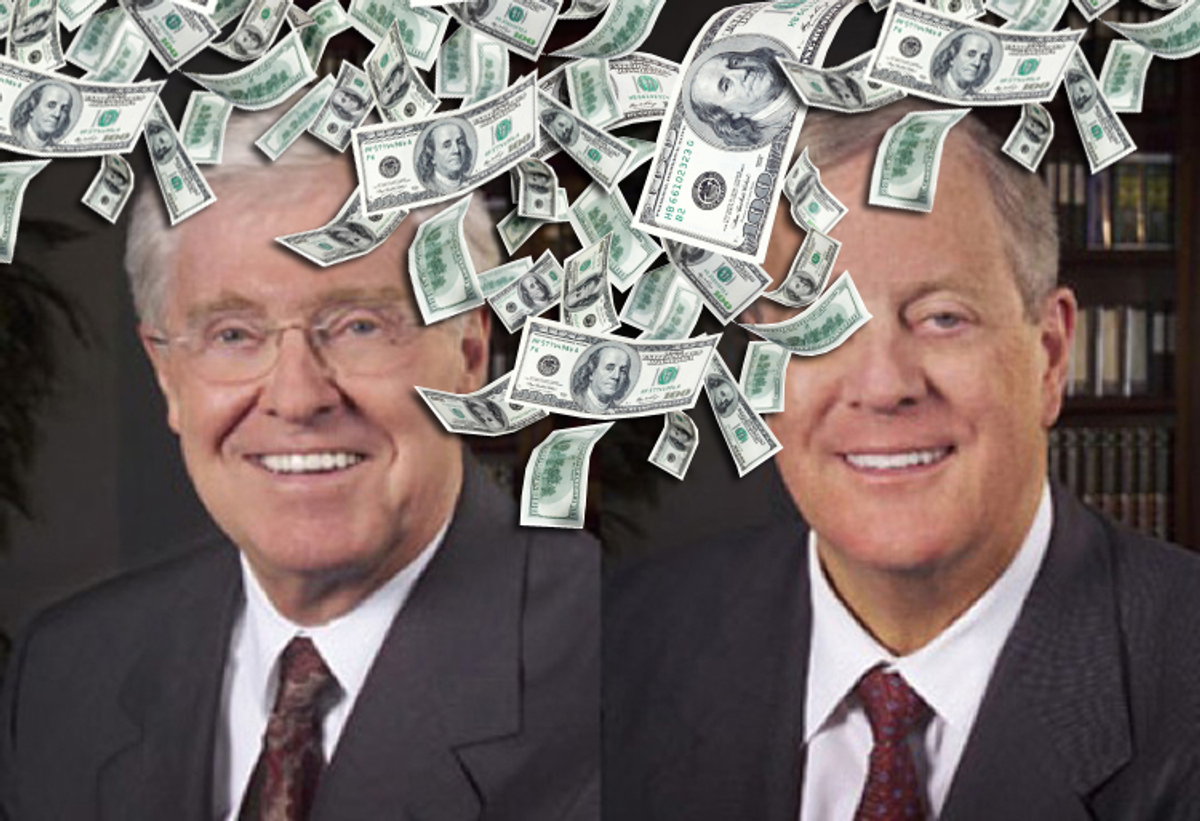 The libertarian industrialist brothers David and Charles Koch spent more on 2012 elections than previously believed—$400-plus million, new investigations have found. Buried in that reporting is an even more intriguing detail: where and how their political cartel will campaign in 2014.

If you look at the websites of the Koch-backed non-profits identified by the Center for Responsive Politics and mapped even more elaborately by the Washington Post, telling tidbits sketch out the frontline strategy of the Koch-backed wing of the GOP. Thirteen states are priorities, and social media will be used for its propagandizing.

The Center for Shared Services is a job placement agency for the dozen politicized non-profits funded by the Kochs. Besides the Washington beltway, they are looking for nuts-and-bolts campaign staff in Arizona, California, Colorado, Florida, Louisiana, Minnesota, Nevada, New Hampshire, New Mexico, North Carolina, Ohio, Texas and Virginia. They even have a Twitter page for hiring, at FreeMarketRecruiting.

The Koch groups, which railed against Obama and congressional Democrats in 2012, especially want to hire grassroots organizers and social media experts. One group, the Public Notice, describes itself as “an independent non-profit dedicated to providing facts and insight on the economy and how government policy affects Americans’ financial well-being.” It seeks a “social media engagement specialist,” who will “plan, implement, and optimize numerous paid advertising campaigns on diverse channels such as Facebook, Twitter, Pandora, YouTube, Google, OutBrain.”

This social media campaign position reflects a shift away from using traditional broadcast media for electioneering, which political consultants say will be the big trend in 2014.

“Campaigns will need… the ability to predict when a conversation on social media has the potential to become rapidly viral or, potentially, nuclear,” wrote Bryan Merica, in Campaign and Elections magazine. “Imagine a communications war room staffed by a college intern… A young team member will know when to raise the red flag and alert senior campaign staffers to a quick moving story or sentiment.”

The Kochs' cartel seems to be embracing this strategy. Voters and social media users in its 13 targeted states may soon start seeing messages from any number of little-known Koch-funded groups with anti-government messaging. These include:

•  The 60 Plus Association. Founded in 1992, it tries to be the right-wing version of the American Association of Retired persons, or AARP. The Post found that it spent $4.6 million on ads against Obama, Obamacare and House Democrats in 2012.

• American Commitment. Run by a Fox News columnist, it calls for making Obamacare voluntary, opposes minimum wage increases, and is anti-regulatory, pro-fracking, anti-tax and pro-property rights. It urges people to sign a pro-ALEC petition, referring to the American Legislative Exchange Council, which drafts and distributes pro-corporate bills to state legislators to push in their home states. In 2012, it spent nearly $1.9 million on ads attacking Obama and Democrats and has online petition drives against Obamacare and in support of the Keystone XL pipeline.

• American Future Fund. This Iowa-based nonprofit spent more than $25 million on ads against Obama and congressional Democrats in 2012, the Post said, saying that $63 million of its $68 million came from money transfers from others in the Koch network. It has attacked the Internal Revenue Service and Federal Election Commission for going after its apparent violations of federal non-profit tax and election laws.

• Generation Opportunity. This group ran a national get-out-the-vote effort for the GOP in 2012 that emphasized high youth unemployment rates, the Post said. Its issues were opposing Internet taxes and privatizing student loans, its website said.

While these and better-known Koch-backed groups, such as Americans for Prosperity, are planning for campaigns in at least the 13 states mentioned on their websites and on social media, what the public may first see will be attacks on moderate Republicans. That’s because there is a growing split between candidates backed by the Chamber of Commerce and by the Tea Party—which has been bankrolled by the Kochs.

U.S. Chamber of Commerce president Tom Donahue last week said his organization, arguably the nation’s most powerful business lobby, would actively oppose Republican candidates who won't vote the way it wants. “I think they’re well-intentioned,” he said, referring to Tea Party officeholders, “except when they get to Washington, they’re not going to do what we want them to do, so why should we help them get here?”

By next November, you can bet that hundreds of millions will be spent by the Koch cartel to try to take over the Republican Party in primary elections, and then to wrest control of both chambers in Congress. If you’re in a targeted state, the political propaganda will be everywhere—even on your Facebook page and Twitter feed.