I fell in love with a Republican

I was raised by die-hard liberals, and my progressive friends did not approve. Could our romance possibly last? 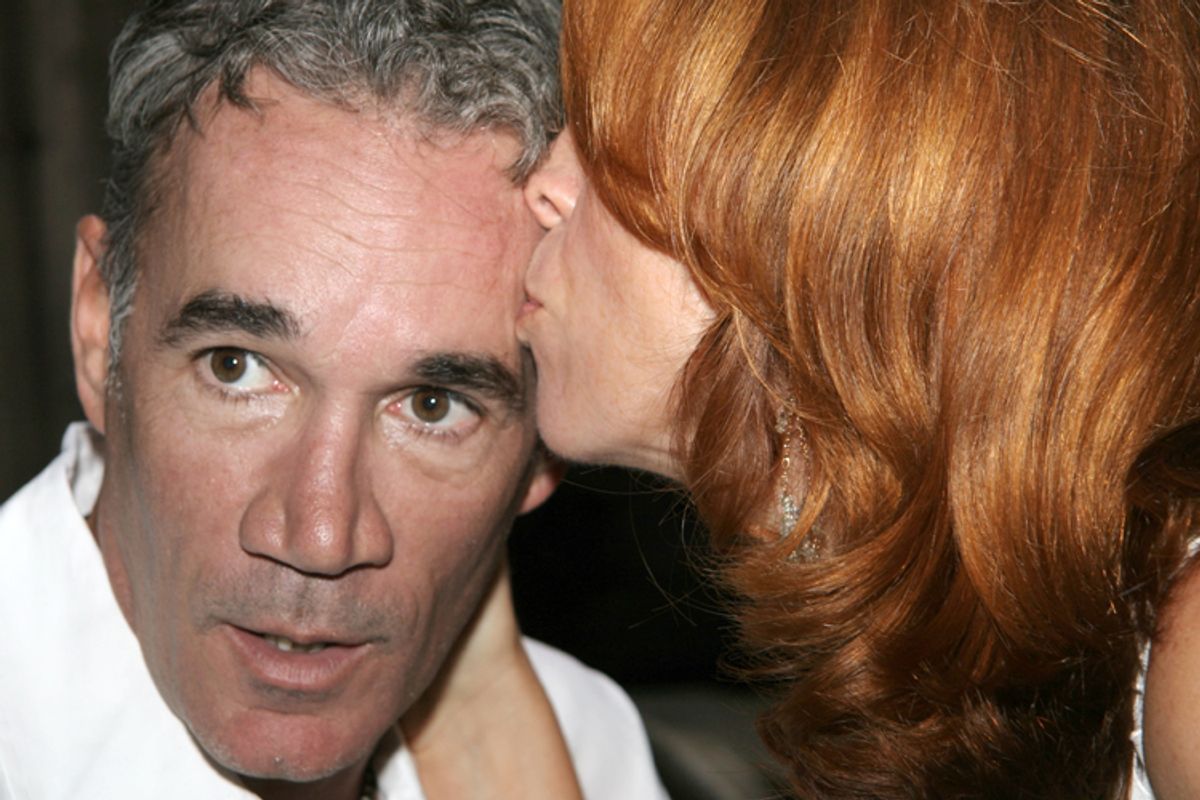 There’s no other way to tell you this. I just have to say it: I fell in love with a Republican.

Believe me, it gets worse.

I don’t mean he votes Republican, I mean he’s in it up to his eyeballs. The man I love personally called Henry Kissinger to tell him about Richard Nixon’s funeral arrangements. He ran Orrin Hatch’s bid for president and has worked for Rudolph Guiliani and even that poor, dumb bastard Rick Perry. His mother has a framed picture hanging in the house of her arm-in-arm with Robert Dole, autographed with a “Thanks Sharon! Bob.” His father is pastor of an Evangelical church, a man who watches a defective television set built with only one channel. Fox News.

For someone like me, whose earliest memories are of a home with pictures of the pope and JFK hanging side by side on the wall, whose mother was known to say “God is not only Irish but a Democrat,” who comes from a family of self-described “Blue-bellied Yankees,” falling for a West Virginia-bred Republican was like admitting I love Darth Vader.

How could this possibly happen, you ask?

At first it was the usual thing, sex.

No, don’t puke. Get that image of a bellicose, rotund Rush Limbaugh out of your head. Banish thoughts of the pasty Karl Rove and forget entirely that cretin from Missouri who talked about “legitimate rape.”

I first saw a picture of the man I love on an Internet dating site. Why was I there? I’d dated the actor-screenwriter-dancer-musician-producer narcissists on the west side of Los Angeles to disastrous effects for far too long.  If the definition of insanity is doing the same thing over and over again, then I was determined to get sane. And sane looked to me like trying Match.com. (I know, I know. Don’t look too hard at that last sentence.)

I hadn’t been on there for more than a month when I opened my inbox and saw a wink from a guy named Jimmy. I took one look at the tattooed arms, the flinty, Steve McQueen-like stare, the sardonic twist of his smile, and somehow I knew that he would smell of hickory smoke and Old Spice, and that the scruff of his 5 o’clock shadow would sometimes rub a rash on my pale skin.

I yelled over my shoulder, "Mom, check this one out! I think this guy's looking for me."

Mom, out visiting from her retirement in New Mexico, ambled up to assess the candidate on the screen. One eyebrow went up.

"Yum, yum," came her verdict. Then she added, "But he's probably a Republican."

Coming from her that was like saying the man beats his dog when he's not in prison. During what we termed “the terrible years,” Mom had forsaken most major news outlets for fear of coming across the latest pronouncements from George W. (Bad for her blood pressure, you understand.)

My response was ha-fucking-ha, very funny Mother, why do you always have to find fault with every guy in the world? Or words to that effect.

You know already the joke was on me. Four months later, I found myself seated at a swanky fundraiser for the California Republican Party, deep in the red heart of Orange County. The tattooed bad boy named Jimmy was indeed a Republican. Not merely a Republican, but a well-established campaign manager and political consultant for the GOP.  Relative to my politics, not only had I fallen in love with Darth Vader, I was now dining aboard the Death Star.

After the speech from then-Gov. Arnold Schwarzenegger but before conservative radio talk-show host Dennis Prager took the mic, I slipped outside with Jimmy so I could get a breath of fresh air and stop biting my tongue. He, meanwhile, was jonesing for a cancer stick.

Jimmy had forgotten matches, so he bummed a light from a woman puffing on her Virginia Slim. The two had worked together on campaigns and fell into easy shop talk, but the woman's eyes narrowed as she began to dish about Schwarzenegger's chief of staff, who evidently leaned too far left to suit her.

"It's Maria's influence," she hissed. Did I imagine it or had her eyes hardened as she looked at us? "That's what happens when our Republican men hook up with liberal women."

Jimmy immediately became very interested in lighting another cigarette. Meanwhile, I smiled, said nothing, and thought, Lady, if you knew we drove here in my hybrid you’d have me burned at the stake.

Today Jimmy's driving a hybrid, tomorrow he could join a labor union -- all because of this writer chick he’s dating. When will it end?

This would not be the last time Jimmy and I would find ourselves in the minefield where love and politics meet. What surprised me was that mostly it was not the intolerant, sanctimonious Republicans but my love-the-world, yoga-practicing, gluten-free progressive best friends who were apoplectic over my new romance. “A Republican? Are you that desperate? Don’t you know what they’re doing to our country?” (Funny, they were never as worried about the heroin addicts or that one guy who’d seen the inside of Folsom.)

Some friends of mine even disinvited us to a dinner party when they found out what Jimmy did for a living. Too bad. Not only because they made an awesome artichoke risotto, but because they missed talking to him. They missed his encyclopedic knowledge of American history, his fervent love of wilderness and of the American park system, his wry sense of humor, his love of great books, his punk-rockabilly past as a professional musician, his arrest record. They missed joining with me to tell him that he is socially liberal and fiscally just wrong, and they missed the argument over the fiscal part that always gets my blood going.

Mostly they missed knowing a man who is loyal to the people he loves. He is fierce, and smart, and unique, and particular, a man whose sum total is not represented by any politician or confined within the doctrine of political party. He drives me absolutely crazy at times, and there are things we will never, ever agree on, but being with him always makes me reconsider what I do believe, and why I believe it. It makes me look closer at all people and not assume I know everything about them from their (stupid, dumb-ass) bumper stickers. (OK, so I have to work on that part. Maybe.)

I guess I need to mention here that I married him. We eloped. Could you imagine a wedding reception? Just one mention of Ayn Rand and my mother would have broken a chair over somebody’s head.

But my point is, I realized that in all those years dating maybe I was the real narcissist, looking for someone exactly like me, who would reflect back to me exactly that which I wanted to see, that which I took to be the indisputable correct way of being. Maybe if we all slept with an enemy, or at least took him to dinner, we’d understand more, maybe even find places of agreement. It happens.

Take Jimmy’s dad, the Evangelical pastor, who now happens to be my father-in-law.  He calls me “daughter.”  I love him. We have great arguments. Once, he even saw my point and voted the same way I did. Granted, it was for Kirstie Alley on "Dancing With the Stars," but, hey, it’s a start.

Orange County Register reporter Samantha Dunn has written for O, the Oprah Magazine, Glamour and many other consumer magazines. She is the author of several books and teaches in the UCLA Writers Program.