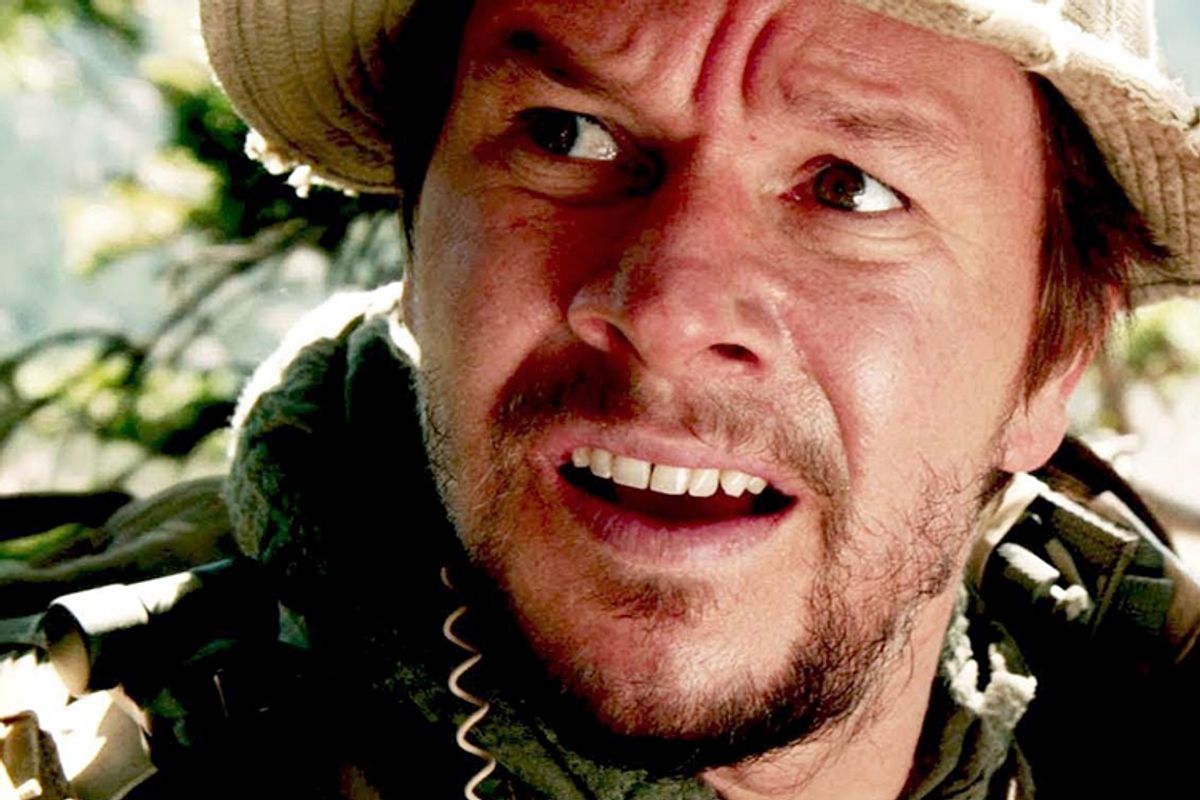 Editor's note: The Academy Awards really likes the "sound" of this film. They nominated it for Oscars for sound editing and sound mixing.

BUZZARDS BAY, Mass. — You can say one thing for Marcus Luttrell, author of the Afghan war narrative “Lone Survivor”: He certainly has a lot of confidence.

The former Navy SEAL, whose account of a disastrous operation in Afghanistan has just been made into a movie, is now making the rounds of news organizations and talk shows, and finding the terrain almost as perilous.

When the journalist remarked on the film, and the emotions he felt while watching four brave soldiers try and fight their way out of a situation in which they were hopelessly outnumbered, Luttrell all but exploded.

“Hopelessness really never came into it,” he said, visibly upset, during Friday's interview. “I mean, where did you see that? … We never felt like we were losing until we were actually dead.”

Below is a clip from the CNN show, via Mother Jones.

Three of Luttrell’s brothers-in-arms died in a failed bid to kill or capture a Taliban “bad guy.” Sixteen more servicemen perished when insurgents shot down their rescue helicopter.

It was the worst loss of life in Navy SEAL history.

The film, which stars Mark Wahlberg, is breaking all sorts of box office records and is on track to become the biggest war movie of the post-9/11 era.

Directed by Peter Berg, the movie version of “Lone Survivor” is a love poem to courage and grace in combat. These men suffered and died but never gave up, never abandoned their fellow soldiers and never, ever doubted what they were doing was right.

The book, co-written with British novelist Patrick Robinson, is a bit more prosaic. But the unshakable conviction that the SEALs are always on the side of the angels comes through loud and clear.

This Navy SEAL knows beyond a shadow of a doubt that he’s defending the greatest nation on Earth, and that God is on his side. This is his good ol’ Texas God, mind you, not the rather iffy Muslim one he repeatedly refers to in the book, “a god who’d effectively booted the Ten Commandments over the touchline and out of play.”

Luttrell’s concept of his mission is equally firm: “This was payback time for the World Trade Center,” he wrote. “We were coming after the guys who did it. If not the actual guys, then their blood brothers, the lunatics who still wished us dead and might try it again. Same thing, right?”

Well, not exactly. The destruction of the World Trade Center was the work of Al Qaeda, Osama bin Laden’s militant Islamist organization, which has plotted and carried out numerous attacks on the United States and others in the years since its founding in 1988.

When the twin towers fell, bin Laden was in Afghanistan; the Taliban had taken him in after he was stripped of his Saudi citizenship, then booted out of Sudan in 1996.

Afghanistan’s offer of shelter was at least partially due to bin Laden’s role in helping the Afghans fight and ultimately defeat the Soviet invaders in the 1980s.

The Taliban has consistently denied it had any part in, or prior knowledge of, the 9/11 attacks. No hard evidence has ever linked it to the plot or its execution, as authors Alex Strick van Linschoten and Felix Kuehn point out in their 2012 study, "An Enemy We Created: The Myth of the Taliban-Al Qaeda Merger in Afghanistan."

This makes little difference to Luttrell, however.

“They may not have been the precise same guys who planned 9/11. But they were most certainly their descendants, their heirs, their followers. And our coming task was to stop them, right there in those mountains, by whatever means necessary.”

The SEAL team’s specific target was a Taliban bomb maker known in the book as Ben Sharmak; in the film he’s named Ahmad Shah.

Luttrell states baldly that Sharmak was “one of Osama bin Laden’s closest associates” — a statement that falls more into the realm of fiction than fact. Analysts say Ahmad Shah, who was an insurgent leader in Afghanistan aligned with the Taliban, had never met bin Laden.

Luttrell is not alone in his confusion. For more than a decade, the US has been fighting Al Qaeda in Afghanistan — long after bin Laden and the bulk of his fighters had scarpered over the Hindu Kush Mountains into Pakistan in 2001.

In 2010, Leon Panetta, then director of the Central Intelligence Agency, estimated there may have been as few as 50 Al Qaeda operatives left in Afghanistan, at a time when the stated mission of the more than 90,000 US forces in Afghanistan was to “disrupt, dismantle and defeat Al Qaeda.”

Luttrell has great admiration for President George W. Bush. He is, in the words of a fellow SEAL, “a real dude, man.”

But he has the deepest contempt for journalists, the “liberal media” which he blames for his teammates’ deaths.

As the SEALs claw trough the mountains on their way to their target, they’re discovered by a trio of goatherds.

As Luttrell tells it, the sensible thing to do would have been to kill them all, to prevent them from betraying the presence of the soldiers to the Taliban. But, aware of the possible outcry from “untrained and half-educated journalists” with their “know-nothing rules of etiquette in war and human rights,” the team takes a vote and decides to let the unarmed civilians go.

It was, Luttrell concedes, “the stupidest, most southern-fried, lame brained decision I ever made in my life.”

Soon the team was ambushed by the Taliban, a gruesome firefight ensued, and three SEALs were dead.

Luttrell is rescued by an Afghan, a villager who extends protection under the Pashtun code of hospitality, or Pashtunwali. This was, in fact, the same protection that had earlier been accorded to bin Laden.

It’s just as well that Luttrell and his savior, Gulab, did not share a common language. The SEAL’s pejorative references to the Afghan’s country and its customs might have put a strain on the relationship.

Afghanistan, in Luttrell’s estimation, is “Primitive with a capital ‘P’” and does not belong to “the civilized side of the world,” which is made up of Western countries. He talks of “guys with different colored towels around their heads” munching on “mule-dung sandwiches,” which could be considered a tad offensive.

He is equally dismissive of Pashtuns, whose members make up “that vicious little tribal army,” the Taliban.

Luttrell is convinced — erroneously — that “a vast number of bin Laden’s Al Qaeda fighters” were Pashtun. They were actually drawn mostly from Arab countries.

Even now Luttrell doesn’t really know what he was fighting for — not that it bothers him much.

Luttrell is ultimately rescued by Army Rangers, and returns to tell his tale, with a book contract and a movie deal, and, finally, an interview with Jake Tapper.

It’s hard not to sympathize with Luttrell’s agonized challenge to Tapper, who is talking in his “liberal-media” way about “senseless American deaths.”

“We spend our whole lives training to defend this country and then we were sent over there by this country — so you’re telling me because we were over there doing what we were told by our country that it was senseless?” Luttrell said. “And my guys — what? They died for nothing?”

That’s the trillion-dollar question, and unlikely to be answered by this book or movie.