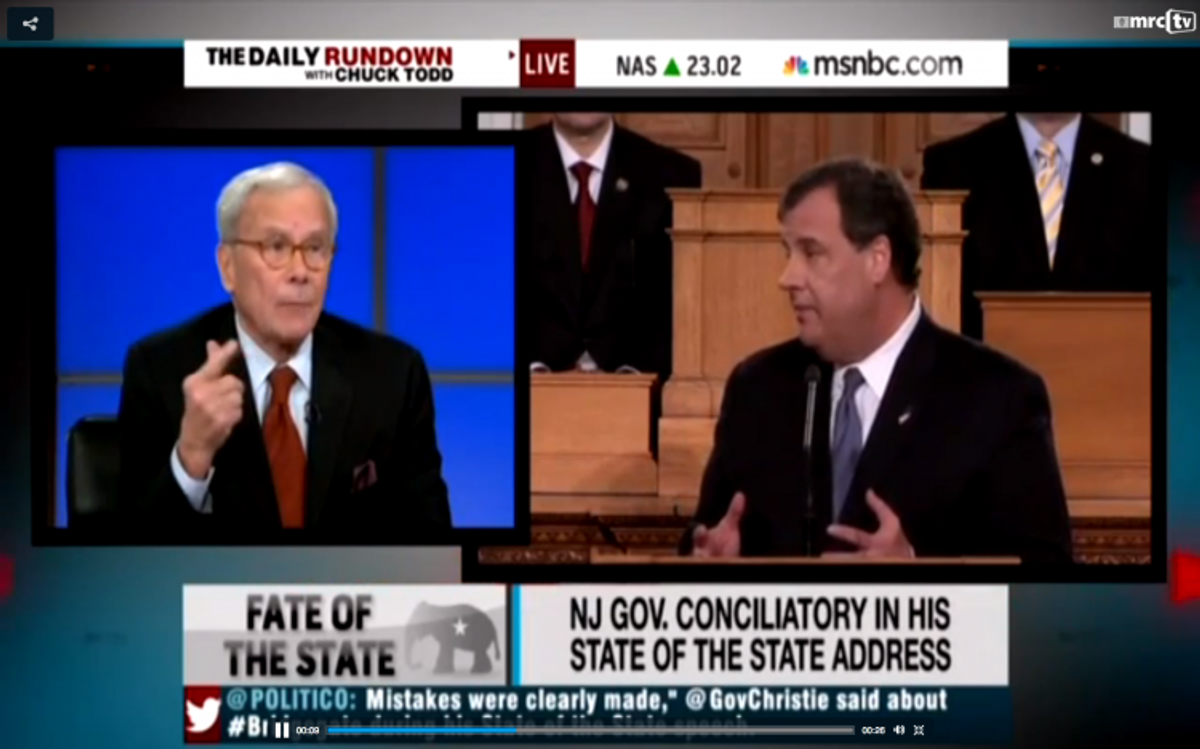 When it comes to coverage of the Chris Christie bridge scandal, legendary NBC anchor Tom Brokaw’s had enough. "I do think, across the country … they're saying, 'You've got to move on, guys,'" he told Chuck Todd on Wednesday’s episode of "Daily Rundown." "You can only close those lanes for so long if you're in the national media.”

Brokaw’s point would be right on point -- if this were another one of those dumb gaffes (Marco Rubio reaches for water!) or made-for-TV crises (Rick Perry's mid-debate brain-freeze) that often get so much coverage. Or if it were one of those flaps where a politician is caught doing something (usually sexual) that’s embarrassing – but ultimately has little effect on his job.

But it’s not. Unlike presidential aspirants Eliot Spitzer and Mark Sanford who resigned their offices after committing infidelity, those most harmed by the actions of the Christie administration were his constituents. And unlike mayoral wannabe Anthony Weiner and Sen. Larry Craig who were effectively shamed out of their positions after relatively tame but embarrassing sex-capades, Christie’s scandal actually put lives at stake.

In other words, unlike most stories that occupy hours of national media attention, Christie’s bridge fiasco is the kind of abuse of power the free press, at its best, has long sought to expose and hold to account.

Why is this flap so different? Start with the victims. In this plot, those harmed were the actual citizens of Chris Christie’s state. Infidelity is obviously not something most condone, but private matters between spouses may not necessarily wreak consequences on a politician’s constituents. Ditto for other political payback scandals, where the target is very often another politician. But in this rare case, the retributive acts were – incomprehensively -- directed at New Jersey residents themselves. That puts it in a very different category.

More than targeting constituents, though, this plot is also more serious because it put lives at stake. Yes, the scheme has often been described somewhat blithely as a mere “traffic jam.” But let’s be clear: Any time the Christie administration’s multi-lane closure on the George Washington Bridge is cavalierly called a “traffic” incident or “inconvenience,” his spin operation is landing a massive win.

That’s because the galling, important result of the plot is not merely that some people sat in a traffic jam. As has been documented, several emergency vehicles were held up trying to rescue residents in despair – “at least four medical situations in Fort Lee,” according to the Bergen Record — including an elderly woman who later died, and a missing 4-year old child whose search was impeded.

Commuters trying to get to their jobs on time were significantly delayed, slowing down businesses and allegedly costing workers wages. Young schoolchildren, en route to their first day of school, sat in buses for hours.

And less chronicled was an additional, chilling reality. The George Washington Bridge was the subject of a foiled terrorist plot in the 1990s – and, as the world’s busiest bridge, remains a large enough target that it’s under constant patrol by the NYPD. In the highly improbable (but not altogether inconceivable) event that something were attempted on that bridge while the government was intentionally slowing down traffic, countless lives would have been imperiled -- directly as a result of the Christie administration. The irresponsibility of the scheme was breathtaking.

Putting aside the theoretical, however, there are some very real costs with which the state will soon have to contend. The monetary and safety damages described above will reportedly lead to a variety of civil lawsuits against the state (in one case, livery drivers are arguing that the state’s alleged illegal conduct “affected trade or commerce”). Whether or not they have merit, the state will have to pay to defend and/or settle these suits. Which means that a politically motivated plot by the government could end up costing millions in damages and settlements – to potentially be paid by the very taxpayers victimized by their own government.

Add to all this the fact that the man running the operation in question is considered a top candidate for president – and that he’s been caught issuing numerous false statements about the scheme. Throw in the fact that numerous investigations have been initiated to uncover the motive and scope of the plan (as well as the extent of the governor’s involvement). Then, keep in mind that the story has illuminated a pattern in his office of petty, retributive behavior. And that numerous aides have resigned, lawyered up and refused to speak -- as the governor declines to say whether he'll cooperate with legislative inquiries and expends little effort to uncover answers.

Consider all these factors, and the cost to his own constituents in money, time and safety. And suddenly, this story about the treatment of a state's residents by a man who wants to be our next president feels a bit more worthy of attention than the politician who grabbed some water -- or the one who accidentally sent a dumb tweet. Considering Tom Brokaw famously implored the nation to salute the contributions of a generation of everyday Americans, it's a distinction you might expect him to embrace.