As the ACA stabilizes and Chris Christie stumbles, the former 2016 contender slips from relevance into inanity 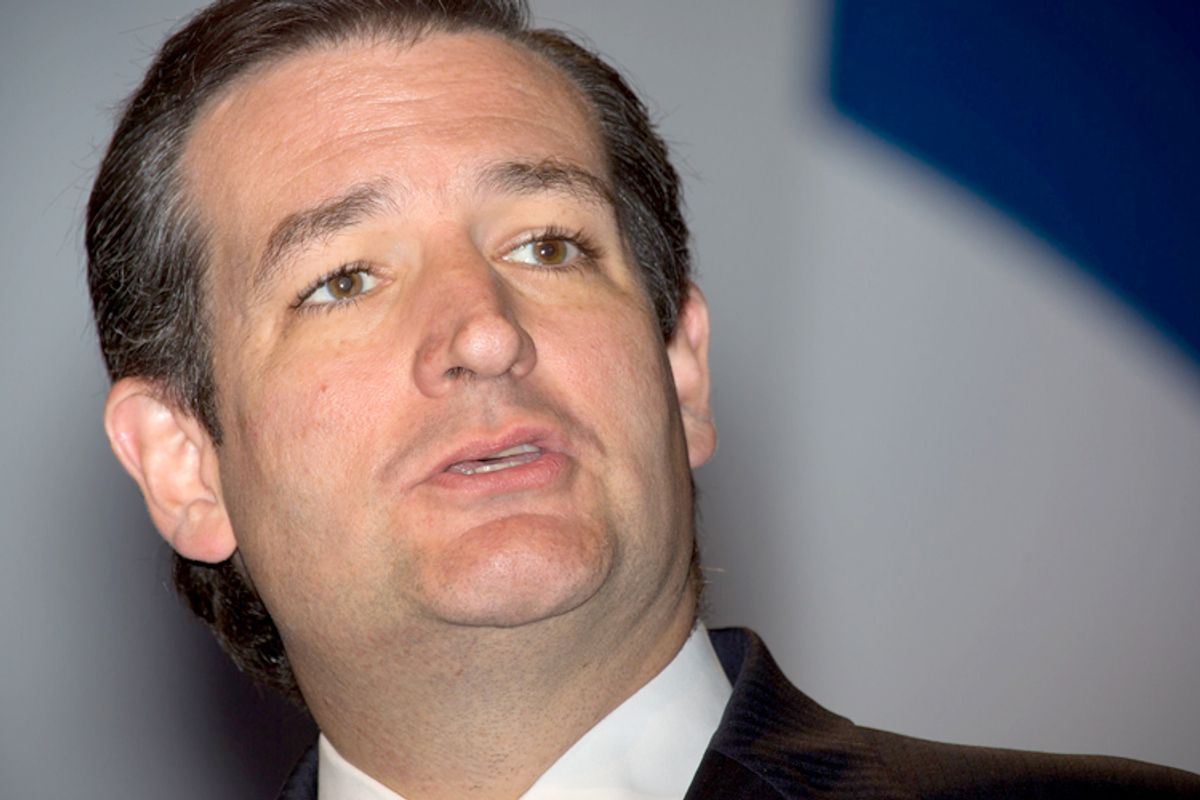 Sen. Ted Cruz’s fearless crusade to defund what he calls Obamacare ended with a whimper not a bang Thursday, as the junior senator from Texas dropped his demand that the Senate vote on amendments to defund the Affordable Care Act before passing the $1.1 trillion spending bill.

"The majority leader and Senate Democrats have chosen not to listen to the American people," Cruz said. The Senate voted 72-26 first to cut off debate, then to pass the bill.

Apparently Cruz’s Senate GOP colleagues spent the Thursday lunch hour begging him to drop his plan for a defund-Obamacare vote, according to the Washington Post’s Lori Montgomery. He still tried, but he didn’t try that hard.

Concerned that the freshman senator’s quick surrender might be interpreted as backing down – which it was – his office issued a statement later saying “he remains committed to keeping the conversation about Obamacare front and center as the law continues to harm more and more Americans by raising their premiums, canceling their plans and keeping them from their doctors.”

Sure. The Affordable Care Act is on its way to stability, as the number of signups continues to surge in advance of the March 31 deadline, and as people who lost coverage find better plans and/or subsidies. Ted Cruz, meanwhile, is on his way to irrelevance.

Cruz made some headlines Wednesday for picking up the right-wing staffer fired by the House Republican Study Committee (for leaking their deliberations to right-wingers in Congress). Hiring Paul Teller his deputy chief of staff was supposed to be a stick in the eye to his moderate colleagues, but nobody outside the wingnut blogosphere seemed to really care. Teller, who tried to sabotage his House GOP bosses but got caught, might be a good hire if Cruz planned to run against John Boehner for speaker, as he seemed to want to do last fall. Sadly for Cruz, he is unlikely to be able to do that as a senator (I forgot it is technically possible though it's never happened.)

His presidential hopes don’t look much more encouraging. Let’s stipulate that national 2016 polls have little predictive power in January 2014 – in fact, they’re rarely predictive later in the cycle, because the primary and caucus delegate count is the only poll that matters. Still, they tell us something about each potential candidate’s national appeal. And Cruz’s is diminishing.

Just a month ago, he was tied for fourth place in the NBC/Marist Poll, with the support of 10 percent of those surveyed. Now he’s down to 5 percent, and way behind the top-tier candidates, in seventh place – he even trails Rick Santorum. (He came in first in a late-September Public Policy Polling survey done at the height of his government-shutdown showboating.)

Interestingly, Christie is still the GOP front-runner in the Marist Poll, although he’s slipped badly in a head-to-head matchup with Hillary Clinton – from 3 points behind just a month ago to 13 points behind now. As a journalist, the stumbles of Christie and Cruz sadden me a little bit, selfishly: It would be a lot of fun to cover them going head to head in 2016. And imagine if they teamed up as running mates: Mean and Meaner. On the other hand, as a human being, it’s a relief to see two men renowned for their self-regard and nastiness get undone by it.

There’s even bad news for Cruz in Texas, where state Sen. Wendy Davis is actually outraising Texas Attorney General Greg Abbott in advance of their 2014 contest for governor. Democrats are more than ready to make Texas a blue state again, and it may not happen in 2014, but it could by the time Cruz has to run for reelection in 2018.

Ted Cruz may still run for president, but in reality, he’s mainly in the running to become Jim DeMint, the former senator and current Heritage Foundation head – a right-wing firebrand who makes enemies out of even some ideological friends, establishes no Senate legislative legacy, and moves on to a lucrative, flattering wingnut welfare sinecure.

They’re buddies now, but DeMint might want to watch his back. Cruz is smarter than he is, and makes sure everyone knows it. He’d run a crackerjack think tank, making sure to hire nobody from the "minor" Ivies.