Shooting the messenger: The time I dared to critique gun activists' agenda 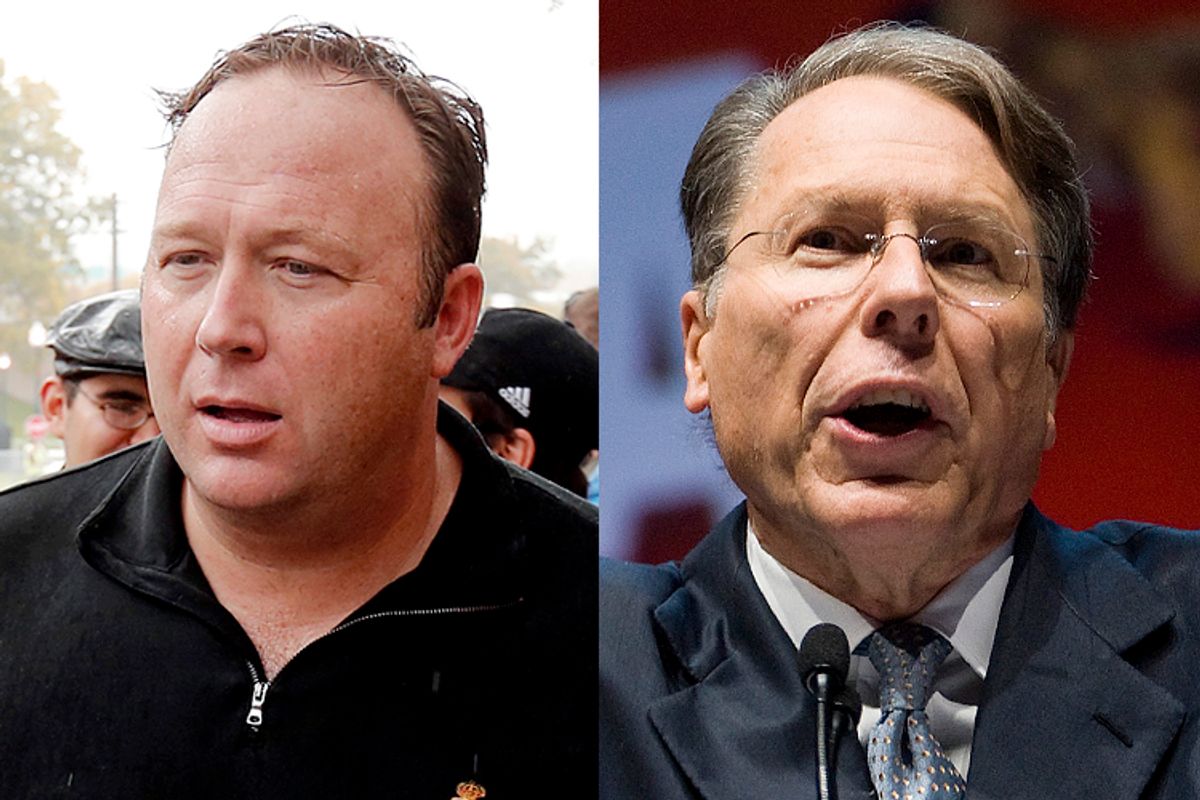 Last month, I wrote a front-page article for Salon about the psychology of open carry, entitled “Gun rights activists have a new craze, and it’s more dangerous than you think.” The story topped Salon’s “most read” list, at one point surpassing even the "Duck Dynasty" drama and a piece about Jennifer Lawrence’s sex toys. Gun safety reform groups like the Brady Campaign and Moms Demand Action for Gun Sense in America shared it on their respective Facebook pages, but so did the gun rights group Open Carry Texas, which called it “a fairly balanced article.”

I also received feedback from people who were angry about the article, even though they had no idea what was in it. They’d only seen the responses to my story that popped up in conservative media outlets and online forums, where my original message was deliberately distorted. But that’s to be expected — lately, any story that voices cautious or moderate attitudes about guns (let alone actual policy changes) is quickly reappropriated. The formula is consistent: shoot the messenger, then rewrite the message.

Surely part of the reason my story attracted so much attention was its provocative headline, which I actually didn’t write. (Contributors often don’t write their own headlines.) Conservative pundit Charles Cooke spends the first two paragraphs of his response in the National Review critiquing the headline. He then accuses me of making several improbable “predictions” about what will happen in Texas if the state legislature removes current restrictions on open carry. Actually I made no predictions whatsoever. I described some real-life incidents involving open carry, and discussed the way people generally behave when they see or hold a weapon (These aren't predictions, but rather observations documented through 40 years of empirical research, conducted by social scientists at major universities and published in peer-reviewed journals).

Cooke waves all that science away, dismissing it as “science” in incredulous quotation marks. He doesn’t bother to articulate any specific flaws with the methodology of these studies. Instead, Cooke tries to impugn the source — he calls me a “guru” (do I need new business cards?) and implies that, because Salon is such a liberal, aloof publication, any analysis published here regarding Texas politics is inherently shady. (Never mind that I have lived in Texas for 18 years.)

Cooke uses my name fifteen times in his article, shifting the focus away from the content of the story and onto the author, as if I had dreamt up every detail from my own imagination. National Review readers left hundreds of comments, but most were only tangentially related to the issues in the original Salon story.

Treading on the rattlesnake

Commentators like Charles Cooke and Alex Jones want their audiences to think that journalists are waging a deliberate culture war, inciting panic and antagonizing gun owners who just want to be left alone. And to be fair, some journalists seem to be doing exactly that — often at their own peril.

When the Sandusky Register, a small Ohio newspaper, published the names of 2,500 local concealed carry permit holders, gun rights organizations retaliated by publishing personal information about editor Matt Westerhold. According to Mother Jones, Buckeye Firearms released details of Westerhold’s divorce and tips about how people could stalk his 12-year-old daughter. A similar scenario played out last year in New York state, when The Times Journal mapped the locations of concealed handgun permit holders throughout two suburban counties. Staffers received death threats and packages containing white powder. After blogger Bob Cox published the home addresses of many employees of the newspaper, the threats became more specific — credible enough that the publisher hired armed guards and encouraged some staff to change their phone numbers and sleep in hotels.

Lieutenant Colonel Robert Bateman seemed almost to invite the vitriol of Second Amendment activists when he wrote an essay for Esquire proposing sweeping gun reform, reappropriating Charlton Heston’s rhetoric about prying guns “from your cold dead fingers.” Bateman later described the thousands of threatening e-mails he received, and quipped about the bad grammar of his would-be assassins (i.e., “You’re days are numbered”).

However provocative, Bateman’s plan is so ambitious (banning the sale of most types of guns, implementing a national buyback program, heavily taxing ammunition, etc.) that it’s absurd to imagine it being enacted. In the current political climate, where even a watered-down bill to expand background checks can’t find its way to the president’s desk, it’s hard to accept Bateman’s proposal as anything more than an academic exercise — neither an actionable solution to our national violence nor a credible threat to gun rights.

Aiming for the center of mass

More realistic reform can only come from more moderate voices — especially trusted personalities in the firearms community who could endorse changes to advance public safety without curbing constitutional rights. Gun rights activists brew a special hemlock, though, for those few journalists among their own ranks who don’t toe the line — calling for their resignations and demanding public disavowals from their publishers.

Ravi Somaiya recently wrote an incisive article for the New York Times about Guns & Ammo columnist Dick Metcalf, who was fired last year for writing that second amendment rights, like all constitutional rights, “are regulated, always have been, and need to be.” Metcalf went on to defend an Illinois state law: “I don’t think 16 hours of training to qualify for a concealed carry license is infringement.” The rancor over that earnest statement also prompted the resignation of Metcalf’s editor, Jim Bequette, who profusely apologized to readers for allowing the column to run in the magazine.

Metcalf and Bequette should have anticipated that outcome, which had a precedent. In 2007, Jim Zumbo was a hunting superstar with his own column in Outdoor Life magazine and his own TV program on The Outdoor Channel. But his media empire collapsed spectacularly when he wrote a brief blog post asserting that semiautomatic assault rifles “have no place in hunting,” and that “to most of the public, an assault rifle is a terrifying thing.” Those remarks elicited thousands of outraged replies — addressed to Zumbo himself, but also to his employers and sponsors. An official statement from the National Rifle Association recast Zumbo’s offhand blog post (dashed off one evening after a long day hunting coyote) as something more calculating and sinister — a “divide and conquer propaganda strategy.” Within days, Zumbo had lost his endorsement deals and his column at Outdoor Life, ending a 45-year-long relationship with the magazine. The TV program “Jim Zumbo Outdoors” resumed after a five-month hiatus, but his career still hasn’t fully recovered.

As Somaiya discusses in the Times, gun publications are beholden to gun manufacturers, who provide advertising dollars as well as the latest weapons for review. A magazine like Guns & Ammo can jeopardize its own future by publishing articles that rile the industry. Dick Metcalf and Jim Zumbo were both fired partly to appease big gun manufactures.

The threat that moderate voices pose to the gun industry is a real one. 2013 was a particularly tumultuous year for guns and politics, with 109 new state laws passed — 39 that tightened restrictions and 70 that loosened them, with further changes pending.

If people like Metcalf and Zumbo had been allowed to speak freely, they might have bridged some of the cultural divides that make guns such a fiery issue in this country, and brought a calming effect to the debate. Which would be bad for business, because reasonable compromises deflate the hysteria that drives buyers in droves to gun dealers, cash in hand, every time there’s national debate about gun reform.

Matt Valentine teaches writing at the University of Texas at Austin. His stories have been published in The Atlantic, the Washington Post, and the New Republic. His photographs have appeared in the New York Times, Men’s Journal, and Outside.