It may be a prestige drama beloved by liberals, but "Downton Abbey" is one of the most conservative shows on TV 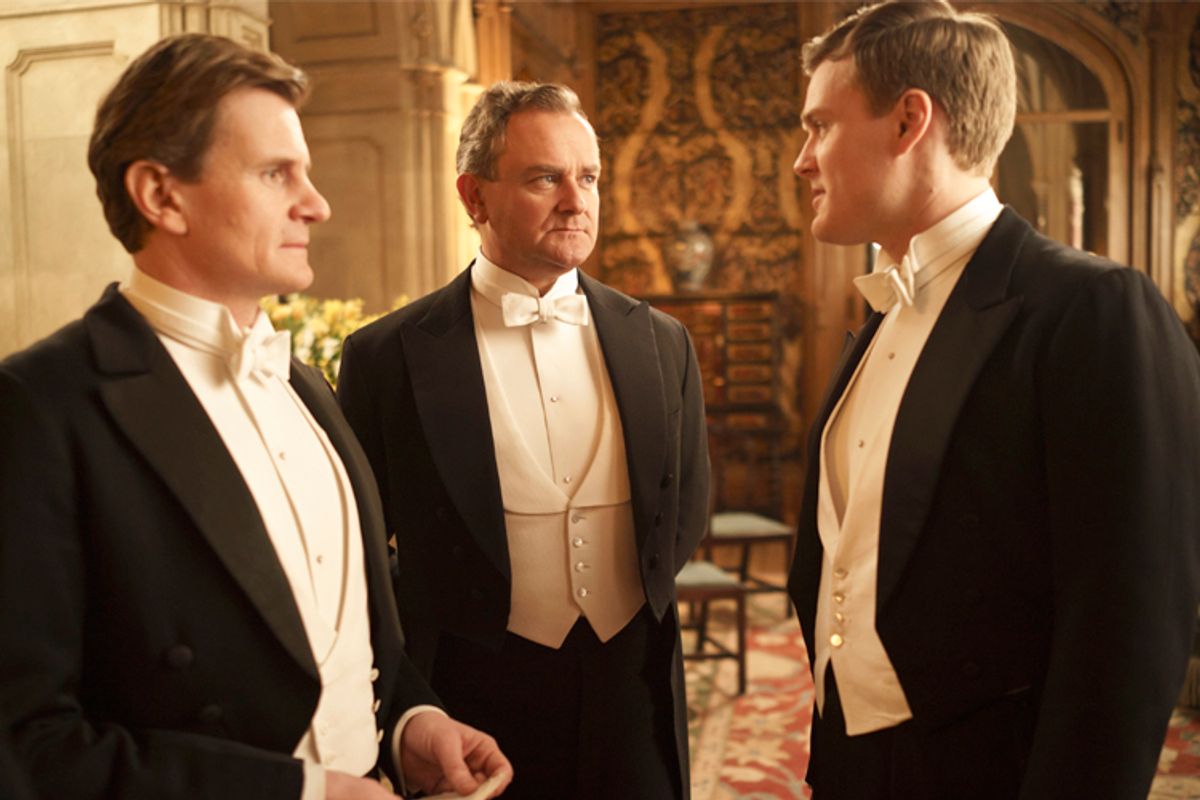 Plenty of "prestige dramas" -- the sort of programs that get bedecked with Emmy nominations, air on Sunday nights, and are generally seen as part of an intelligent person's weekly schedule -- are, when thought about carefully, a bit wince-inducing. What's the deal with all the gratuitously naked women and their brutal treatment on "Game of Thrones"? Just how much are we supposed to find Walter White's sociopathic (and, to some eyes, "badass") behavior on "Breaking Bad" compelling and thrilling? Is "Mad Men" glorifying an era of glossy surfaces and unlimited whiskey and cigarettes as it pats us on the head for getting why racism is wrong?

All of these are arguable cases. Modern television, by its very nature, asks us to stick with reprehensible characters season after season, so eventually sympathy or at least casual acceptance of nastiness will develop. If people were really to get the comeuppance they deserve, there'd be no more show, and we want the show to keep going. But at least shows like "Mad Men" and "Breaking Bad" are made with an awareness that their characters are antiheroes.

By contrast, "Downton Abbey," on PBS, is stunningly tone-deaf. The show depicts a group of actual monsters in a manner that's explicitly loving -- and when the facts get in the way, they're disposed of. "Downton Abbey" is a show about how the world was straightforwardly better when an entrenched class system ruled. "Mad Men" has a complicated relationship with the past, depicting the aesthetics and trimmings as glamorous but the ideology as toxic; "Downton Abbey" is not nearly so complicated.

Consider that Julian Fellowes, the writer behind "Downton," is a private-school graduate and Cantabrigian who holds a seat in the House of Lords. He has good reason to deplore the changes in the world since the era when the wealthy were entrenched and unquestioned.

And, indeed, on "Downton Abbey," those members of the underclass who do not seek to live a life of service to the wealthy are, like Mr. Bates' estranged wife who interferes with Bates' sincere desire to be a servant, evil. Those who seek pleasures forbidden to them are slapped down, as in the sad case of a woman ruined when she has sex with a visitor and becomes pregnant. But all who serve are in some way redeemable, like the villainous Thomas, who's forgiven in Season 3, after making a pass at another male servant. (That he is both a conniving villain on the series and the only gay character is, strictly speaking, a coincidence.) Because he is devoted to the wealthy family he serves, everyone, led by Lord Grantham, takes the attitude that they must live and let live. In real life, homosexual acts were not decriminalized in England until 1967.

This lie cuts to the heart of "Downton Abbey" -- in the show's moral universe, all that was good about a system in which the poor were trapped into servitude for the rich remains good. All that was bad floats away and is not worth portraying. As noted by Vulture, Lord Grantham consistently endangers his family by making horrible, arrogantly misinformed decisions; they are always fixed promptly, because the show is intent on portraying positively a wealthy patriarchy even when the facts it requires to spin out the story entirely contradict that.

"Downton Abbey" denies reality in order to keep its vision of a strong and wealthy man doing what is right alive, no matter how counterfactually. It also betrays its characters: Tom Branson, for instance, the husband of the late Sybil, has so far remained a part of daily life and the management of Downton Abbey even in spite of his previously strongly held socialist beliefs. So much for that! And Sybil's punishment for having a baby with Branson is death. Edith is eager to work outside the home and deeply capable -- and she pines after men at the intervals the plot demands. Matthew Crawley is independent-minded and seeks to make his way in the world as a lawyer, until he's drawn back into the house's orbit.

And all of the servants, no matter how independent-minded in their pursuit of love or personal happiness, are truly happy to serve. Again and again, to serve is framed as less an obligation forced by economic circumstances than a rare opportunity to become part of the life of a family (even if a family not one's own). Certainly this must have been one aspect of some servants' lives. But the perpetually heroic treatment of the servants -- cook Mrs. Patmore, for instance, keeps making stupid mistakes, and so her masters perceptively realize she's going blind and buy her eye surgery! -- makes an argument for a system wherein the rich control all but act wisely. The only alternative the show presents is an outside world going to hell, where charlatans invade the family home and try to trick them out of money (as happens in Season 2) and where meaningful social change seems impossible. That's purposeful -- "Downton Abbey" lures us into a world simpler than our own, where equality would be an unwanted complication.