While promoting new indie flick "Obvious Child," the comics opened up about failure and self love in comedy 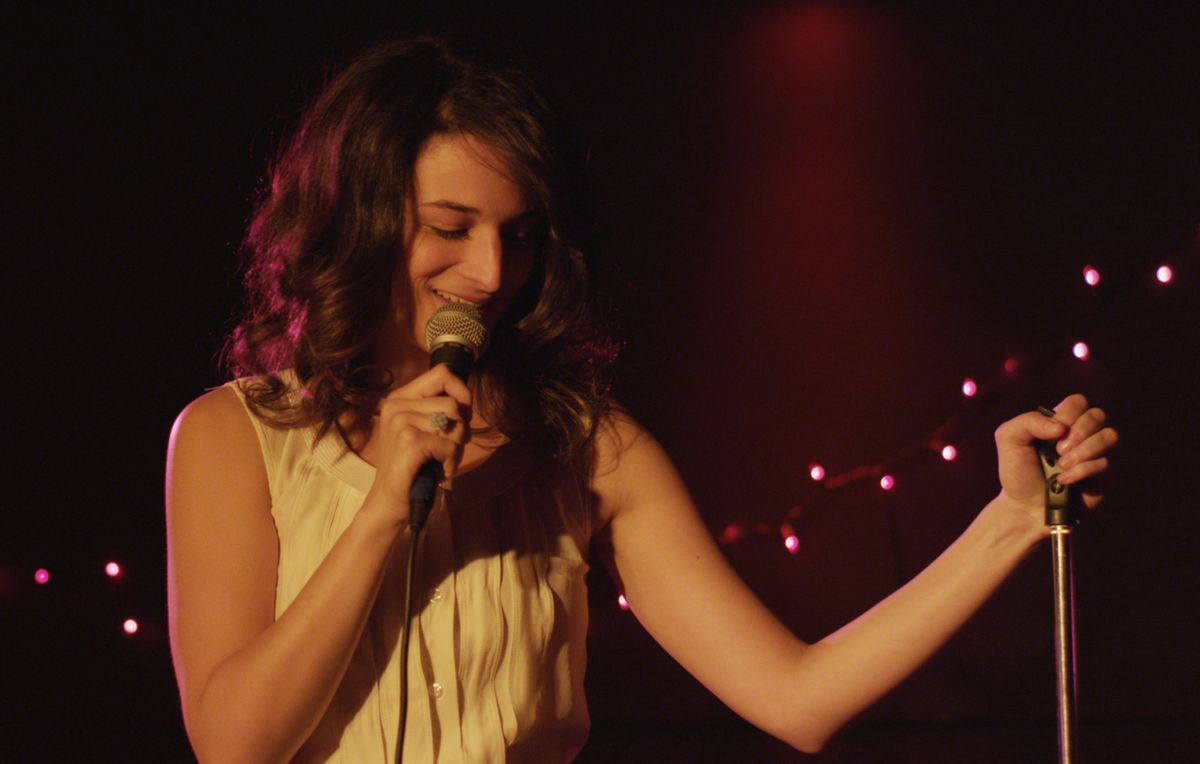 Before he was a writer for the Golden Globe Award-winning show "Brooklyn Nine-Nine" and before she was on "SNL," Gabe Liedman and Jenny Slate were two stand-up comics fighting to establish themselves in Brooklyn. The duo, best friends in real life, have reunited to star in "Obvious Child," Gillian Robespierre's feature film about a Brooklyn comic who undergoes an abortion after having an unplanned pregnancy.

Slate's character, Donna, uses stand-up as a way to cope with and process life, drawing material from (like most comics do) her personal relationships and observations. But when she struggles with a break-up and then the pregnancy, Donna's comedy becomes just as messy.

Although I plan to write a separate post about "Obvious Child's" smart and refreshing portrayal of abortion, I also wanted to share the part of my discussion with Slate, Robespierre, Liedman and co-star Richard Kind about how comedy has affected their personal relationships and vice versa. The question opened up a candid conversation about Slate's infamous flub on "SNL," how she found self-love again, a common disdain the cast shares for "masturbatory" comics, and why Jerry Seinfeld is the king of observational comedy.

In the movie, Donna's stand-up is a way to process her real life, but it also affects the relationships with the people around her. Do you both find that your comedy affects your personal relationships -- or vice versa?

JS: You know, for a while, I was always the same as Gabe. Which was, go up on stage, very loose idea of what I would do and just blast it out. I loved it and I’m pretty chatty in life and it’s all out there, I think. There was a while when I got really bad stage fright and I basically felt...I was incredibly angry. I felt like everything had been taken away from me and it was at that point that I realized how much doing stand up reminds me of my self love and curiosity about myself and love of other people because I don’t go on stage to dominate. Sometimes you watch comedians and feel like they’re jerking off in front of you, but they want you to see how big it is, you know.

RK: I can’t believe you say that because I can’t stand it.

RK: When comedians do that-- that they hope that they intersect with something that’s truly funny.

JS: It’s gross, and I feel like when I go on stage I feel so excited at the prospect that there will be a true connection, which I feel about this film, also. That one heart is beating on a chair, one heart is beating on a screen and they’ll come together and like beat in the air and it will be beautiful. And when that was taken from me, I was like...I just felt like half a person, and it was very sad. Very sad.

What brought that on?

JS: When I got fired from “SNL.” Well, when I said “fuck” on live TV. I don’t make a lot of mistakes, honestly. I’m an A-student, I’m an Ivy Leaguer. I need those things. I’m competitive and I have a messy purse, but otherwise, I like people to think I’m a winner, I guess. And that was something that was obviously a shitty moment and it took a while for me to realize that I don’t have to be that kind of winner and you know that those were things that I cared about more when I was younger. Being on “SNL” was a goal that I had when I was younger. When I got fired, I just felt really mad and I felt really grossed out by the system and grossed out by myself and it just sort of knocked me on my ass. But that’s okay.

Though I imagine that from that came a lot of growth you wouldn’t have gone through otherwise.

JS: Sure, yeah, you know -- I’m not one to wallow, but I am one to feel the sting of a slap for a while, I think. When Richard says in the movie that “the best revenge is living,” I truly believe that and I think I live that way, but I did it for the most part, but when I would go on stage I would start to feel that the eyes that watching me weren’t kind. And it took me a while to realize that those eyes were my own eyes.

GR: But some great things came of it.

JS: Yeah, totally. I have no regrets. The best thing to happen to me was for Lorne Michaels to hire me and fire me. I mean, that was the best thing that has happened to me, but I left that show being like, “Well, I don’t have any of the problems that the thwarted females of the past on SNL had.” I didn’t have any of those horror stories. Personal to me, I just wanted to be free from the experience and I think...I didn’t protect myself from my own spin out.

I wasn’t going to ask about the “SNL” stuff, actually--

GL: You would have been the first ever!

JS: Honestly I think it’s dumb when people start their stories--not that anyone is interviewing me all the time, but--when they start them being like, “[voice with bravado] She got her fame by dropping the F-bomb,” and it’s just like, “Yeah, you read my Wikipedia page, you fucking idiot!” I don’t like it because I would rather somebody ask me something than just like recycle, you know.

I got all of these questions from Wikipedia, so…

RK: Can I address one thing about the stand-up: One thing that I’ve never done-- I’m terrified, terrified of stand-up, but I did years and years of improv at Second City, and when I was at Second City, I would walk down the street trying to think of what’s funny. Of the irony in “Hello.” What’s funny about that? Where’s the irony there? And I cannot imagine living your life trying to think of, dare I say, and this is not the word, “bits.” Things that are funny. What can I address? How can I turn this into funny? And so that would be consuming to me, you know.

GL: It only comes to me when I’m not trying.

GL: Like I can only think of jokes if I’m on a hike.

RK: And I think that is the hardest thing. I mean you said, “How does this affect your relationships?” I would think that affects your life.

RK: You walk down the street praying that something does come to you even if you’re not thinking about it, whatever it is, you’re just praying.

GL: It’s such a dark feeling to be like, “I haven’t had a new joke in a long time.” It makes you feel like such a fucking hack. And I remind myself all the time that bands play the same songs all the time and the audience loves that, but I’m like, “tick tick tick tick, what’s your new joke?”

RK: It sounds like it should be--where your act might come from the telephone of some idiot who did that, all of a sudden, we’ve heard that song before. And all we had to do was hear it once. You don’t get to hum it again. It’s a different animal

GL: It’s a bad feeling, feeling like you’re behind on writing new material. And the other thing is you just can’t force it. If you squeeze it out, it sucks.

GR: Well that’s why I like Jenny’s style and Donna’s style so much, which is just like talking about your life and getting it all out there on the stage and not really needed to write the jokes. You just have such a natural comic lens, that whatever you say is usually very spot on and funny.

RK: What you really do is you have an attitude towards what’s going on. And usually bile is what brings out the funny, and it’s something that we can all relate to. But those who do get up...I do think it’s masturbatory when you think that it’s “My important vision of the world,” “this is a story that happened to me,” and I just go, “No no no, craft it.” There’s craft to what you’re doing.

Can you name any mainstream comics who are "masturbatory"?

RK: I’d prefer not to, but I’ll tell you this--I can name the craftsmen. I mean, Jerry Seinfeld crafts a funny objective view.

GL: That’s a great example. He doesn’t talk about himself, so it’s not the obvious, “Oh, it’s a personal thing.” He brought observational comedy to the mainstream. He’s talking about everything but himself, but it’s so authentically him, all of his jokes sound exactly like him. It’s a great style. There’s no rule that to keep it honest you have to be talking about yourself.

RK: But I’ll tell you this: Jim Gaffigan could take bread, and make 45 minutes. And he does not just come up with that, he has crafted it. That astounds me.