The nerd classic, 40 years old this month, taught me about imagination, purpose -- and having a great adventure 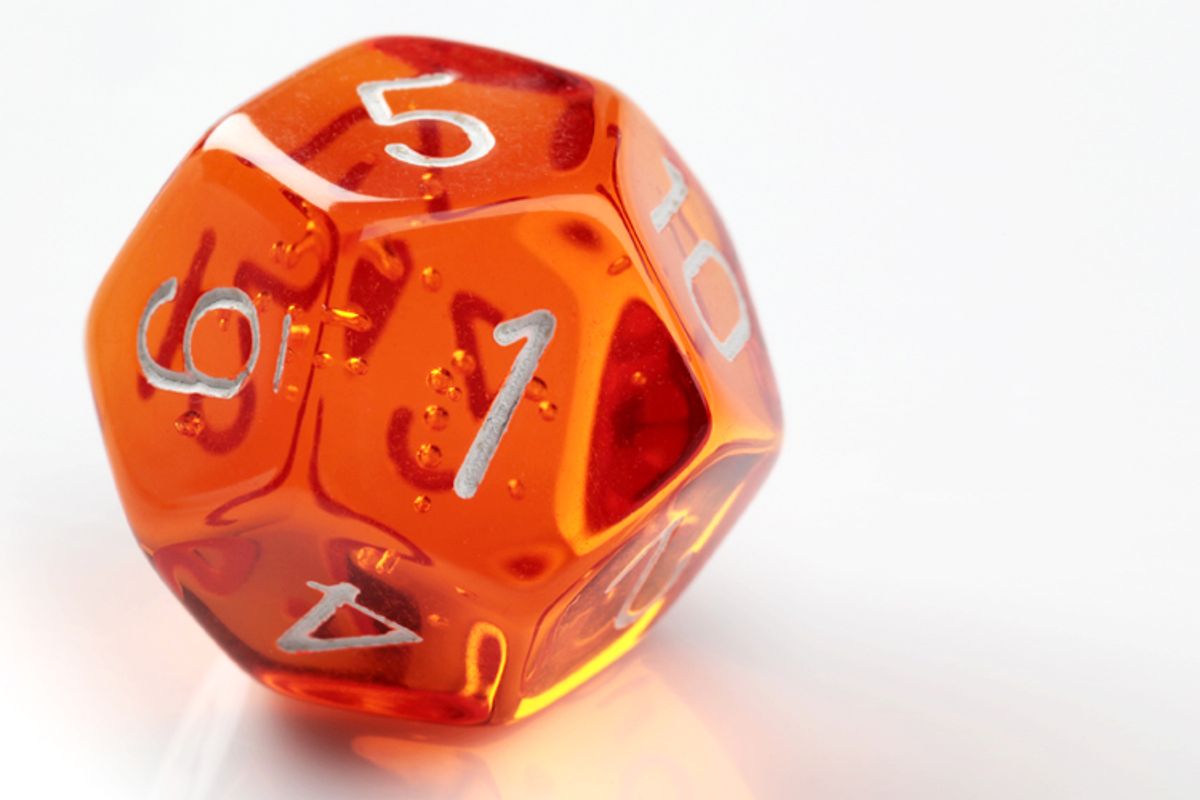 When Dungeons & Dragons appeared in January 1974, 40 years ago this month, it was a fun twist on traditional war gaming. No one guessed it was also revolutionary.

For sure, endless homespun cops-and-robbers-style “make-believe” games existed, as did charades and improv theater. Vast tabletop war games also enacted battles with hundreds of miniatures. But no one had married these concepts into a single game, in a box, with rules for role-playing a single character -- paladin, thief, wizard, barbarian, elf, dwarf, holy man -- giving a personal stake for the player who controlled him or her.

“Those war gamers who lack imagination,” the game’s co-founder, Gary Gygax, wrote in the game’s first introduction, “will not be likely to find Dungeons and Dragons to their taste. But those whose imaginations know no bounds will find that these rules are the answer to their prayers.”

The idea was this: You don’t play D&D on a board. The game is played on graph paper, using dice, maps and books. But mostly it takes place inside the players’ heads. You enact the quest of a character and lead him or her through a series of imaginary adventures, all refereed by a fellow player, called the Dungeon Master.

I played a lot of D&D back in the 1970s and 1980s. After conquering me, D&D went on to transform geek culture. Not only had D&D invented a new genre of entertainment -- the role-playing game -- but it practically gave birth to interactive fiction and set the foundation for the modern video game industry. Into “Halo” or “Call of Duty”? You’re playing an incredibly sophisticated version of a D&D dungeon crawl.

After a long hiatus, I play the game again now, as a 47-year-old, mostly grown-up person. Today, with my +5 Goggles of Hindsight, I can see how D&D was subtly helping me come of age. Yes, it’s a fantasy game, and the whole enterprise is remarkably analog, powered by face-to-face banter, storytelling and copious Twizzlers and Doritos. But like any pursuit taken with seriousness (and the right dose of humor), Dungeons & Dragons is more than a mere game. Lessons can be applied to the human experience. In fact, all I really need to know about life I learned by playing D&D.

1) Everyone has a purpose. “The essence of a role-playing game is that it is a group, cooperative experience,” said Gygax. In D&D, your adventuring party is composed of complementary characters with different talents and skills -- spell casting, fighting prowess, sneakiness, healing, seductive charm -- each to be used at the right time. Same with your office mates, your family or other peer group. Be generous, and think of how each person in your circle can contribute to a cause. (Of course, some people have 17 wisdom, some have 7. So be it.)

2) Diversity rocks: Both D&D and life are richer when we combine in the petri dish of social interaction a mix of different races, backgrounds and experiences. You can’t do it alone, nor can your culture. Of course, D&D assumes some races, such as elves and dwarves, don't even like each other much, but that tension gets played out in the actual game, and ultimately you succeed in putting that animosity behind you if you want to survive. Not only can we all get along, but our groups are stronger for it.

3) Collaboration is better than competition. In its early days, D&D was one of the few collaborative games on the market. You don’t try to bankrupt your fellow players by putting hotels on Boardwalk and Park Place. Nor is the point to destroy them on the gridiron. Rather, D&D says, a game -- and by proxy, human existence -- can be more enriching and satisfying when the goal isn’t to crush your enemies, see them driven before you, and hear the lamentation of their women. And their men. (Of course, you’re technically “against” the Dungeon Master. But he’s also your god, so be nice.)

4) There is no “end.” What was the big invention of D&D? There is no victor. There is no loser. The plot does not wrap up neatly. As a teenager, I learned early on, you don’t “win” at life. There is just the continuing story, the next adventure.

5) Fight, fail, live again. “I nock an arrow in my bow,” you say. “I’m preparing a fireball spell,” says your co-player. In D&D, you go all out. You fight the good fight on the battlefield, with all the mojo you can muster. If you die, you can always get yourself resurrected, literally, in the game. In real life, you will recover from any defeat, setback, embarrassment, mistake and “death” (in a figurative sense). You can do great things if you take risks, and have the courage to fail.

6) Parley! Do not underestimate the power of the tongue. Fighting is not always the best way to solve a dispute. D&D reminds you, rather than brawl, it’s OK to run, or sweet-talk your way out of a bad encounter with a bully or a bugbear (if they even speak Common). There is no shame in a well-bargained escape. Plus, questioning your foe before filling it with arrows might actually get you valuable information. Same with your pain-in-the-ass family member.

7) It gets better. You begin in D&D at first level. You’re a wuss with four hit points. You have a rusty sword, perhaps, or you can cast a spell that makes pancakes. But fear not. Have patience, and you will grow in power and prowess. You will kill stuff, gain treasure, and experience. Before long, you’re no longer a n00b. So too in life: Practice, train, endure defeat, and you will level up.

8) Nothing beats paper and pencil. You’re in the dungeon. You’re about to attack a gang of orcs. Then the battery on your iPhone dies. Bummer. Lights out. Point being, sometimes your devices run out of juice. Bring a backup on any adventure. And remember that analog can be more reliable than digital. So don’t forget your graph paper.

9) Say what you mean, do what you say. You’re still in that dungeon. It’s still dark. “Do you have torches?” the Dungeon Master asks. “Uh, I think so,” you reply. “But you didn’t say you brought torches with you.” Whoops. You’re screwed. In D&D, as in actual human interactions, it’s important to both say things and do things. Make promises -- and act on them.

10) There’s always a chance. As a kid, I felt adulthood must be governed by some invisible rule book. In fact, there’s actually an “Intoxication Recovery Table” on page 83 of the “Dungeon Master’s Guide” to help you role-play drunkenness in D&D. But the truth is, life’s rules are more flexible and forgiving. Not every outcome can be preordained. The world is suffused with randomness. There’s always a chance to succeed. Roll a 20 and even the tiniest hobbit can slay a dragon.

11) Make up a new rule. “If something doesn’t work, get rid of it,” D&D’s other co-creator, Dave Arneson, once said. Out of frustration, or ego, experienced players will often ignore the rules they don’t care for and design their own for success. Same in Real Life: Don’t like that rule on page 127 of the Husband’s Handbook? Write a new one. (As long as it’s not obnoxious, or hurtful, of course.) Look outside of the box. Or “Monster Manual.”

12) Never split the party. Dudes, this ain’t no horror movie. Keep each others’ backs. Don't go wandering off some passageway and get picked off by the baddy. Friends matter. Stick together, so you can tell your stories around the fire afterward.

13) Imagination is king. What if ... life were different? What if I had 18 strength and a magic flying horse and a fortress made of Cheetos (well, maybe not Cheetos)? If nothing else, D&D teaches you to imagine the other, the better, the possible. That’s forward-thinking aspiration. That’s hope. And we need hope.

14) You live by your story. Years ago in days of old, when magic filled the air, you lived by the sword. Perhaps. But more important, today you live by your story. And your character. Are you a victim? A hero? A scalawag? A shapeshifter? “Dungeons & Dragons is a game in which the continuing epic is the most meaningful portion,” Gygax wrote in his 1979 “Dungeon Master’s Guide.” “Player characters ... appreciate that they are in effect writing their own adventures and creating their own legends, not merely reliving those of someone else’s creation.”

The story you tell about yourself, and to others, matters. Make it a good one. Be a hero, not a chump.