GOP insiders freak out: Could Tea Party blow another election?

2012 was just the beginning: Republicans are stuck in a civil war that threatens to derail even more winnable races 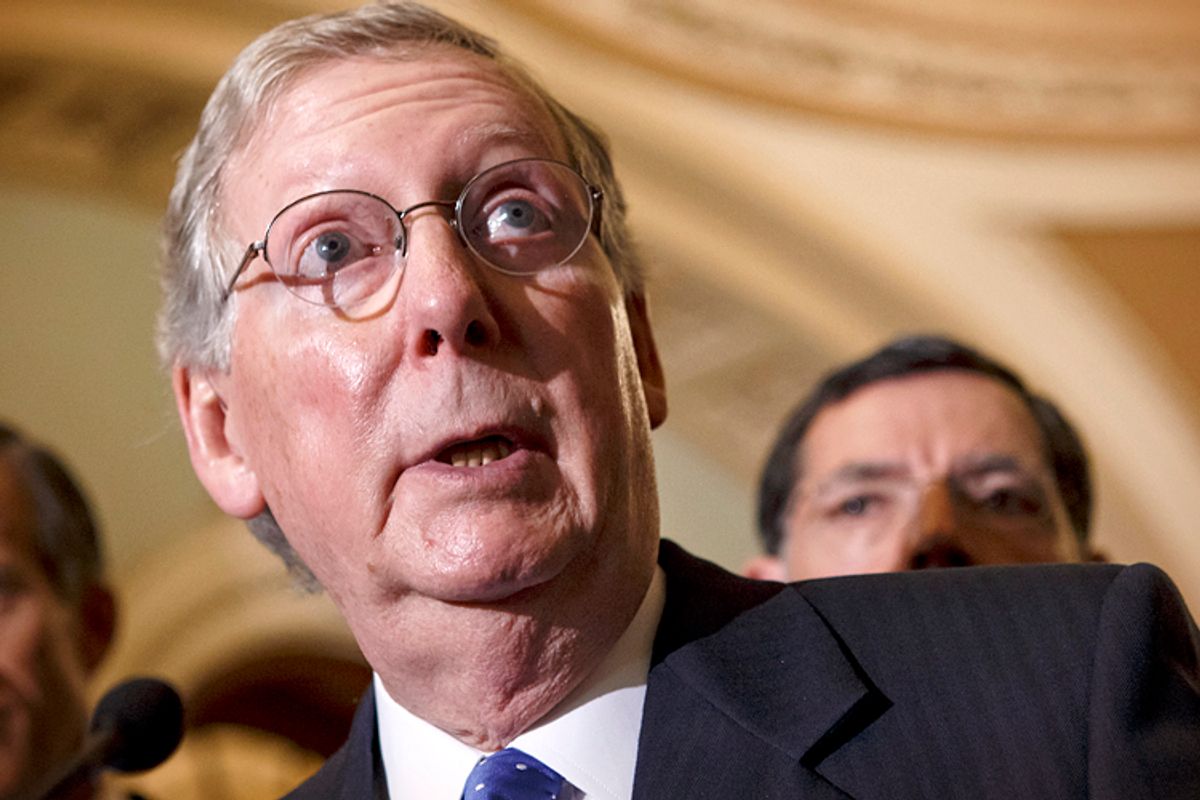 With the Republican Party being torn apart by its internal civil war, an ideological battle that pits establishment Republicans against the no-compromise Tea Party/Christian Right, party backers are doing their best to suppress the craziness as the 2014 midterms approach. But are they succeeding?

“There is a broad concern about having blown a significant number of races because the wrong candidates were selected, “said Steven J. Law, president of Karl Rove’s American Crossroads. “We don’t view ourselves as being in the incumbent protection business, but we want to pick the most conservative candidate who can win.”

The establishment wing is discovering that it’s hard to keep the crazy quiet when your party’s voter base consists of neo-confederates, white supremacists, know-nothing libertarians, and evangelical theocrats. Moreover, social conservatives are no wilting wallflowers when it comes to raising campaign money. A recent Politico piece reported that roughly 25 socially conservative groups combined to pull in more than $280 million in 2011 and 2012. Notwithstanding the fact that much of the Koch brother’s political spending goes to the ideologically insane, too.

Tony Perkins, president of the Family Research Council president and darling of the Christian Right, has urged social conservatives to dump moderates in order to save religious liberty. In the first installment of the FRC’s political action plan for 2014, Perkins writes:

"The House of Representatives is where we have the greatest potential to make the greatest impact—to secure your religious liberties … and keep America from descending into a quagmire of self-destructive socialism.

This is urgently important because President Obama and his allies in Congress appear to be on a search-and-destroy mission when it comes to religious liberty. This administration has expressed its hostility to religious freedom at every turn: in the workplace, in the military, everywhere. They are fully engaged in what can only be described as a direct assault....We cannot, and we will not, allow this to happen."

Social conservatives are obsessed with controlling all matters related to sex, religion and race. Chuck Thompson, author of Better Off Without Em: A Northern Manifesto for Southern Secession, says they have a “group-thought vendetta against liberals and other foreigners that is so besotted with religion, race, militarism, ancient grudges, and hidebound demagogic exaggeration that productive discourse and open exchange of ideas with outsiders become a virtual impossibility.”

It’s not that religious extremists won’t compromise, it’s that they can’t. If they could, they wouldn’t be extremists in the first place.

The Christian Right (Tea Party) is more motivated than ever to mobilize its supporters and challenge even those within their own party who stand in their way. Social conservatives are fighting for their existence as a movement within the Republican Party, and they’re leaving nothing behind in their crusade to remain the heart and soul of the party’s base.

"This election is when the Tea Party movement will professionalize how it engages in politics," says Drew Ryun, the political director of the Madison Project, a conservative campaign group. "We are getting a game plan."

This week, the Madison Project rolled out the first phase of its 2014 operation, announcing it would open five get-out-the-vote centers in Kentucky to work on behalf of Matt Bevin, the conservative businessman challenging Senate Minority Leader Mitch McConnell, R-KY, in a May primary. Ryan says the Madison Project will launch mirror efforts in battlegrounds where the establishment wing of the GOP and the far right go head to head. “I don’t think it is any secret that the stakes for the 2014 election cycle are extremely high. That’s why it is important our groups know how to win in the trenches.”

American Principles In Action published a paper in October arguing that suppressing the Christian Right “would likely consign the GOP to a permanent minority status,” whereas emphasizing social issues will help rally the base and attract coveted demographics with which the GOP has struggled, including Hispanics and “binders full of women.”

With both wings of the GOP well funded and mobilized, the battle for control of the heart and soul of the party will be long fought and bloody. As a result, it’ll be impossible for the Republican Party to keep a lid on the crazy. In fact, this year’s crazy has already jumped out of the far-right’s tri-cornered hat, and it’s barely the third week of January.

In South Carolina, state Sen. Lee Bright is challenging veteran Sen. Lindsey Graham (R-S.C.) for his senate seat. Bright has not only called “FEMA a scam” but he has promised “to get rid of the IRS.” After seeing a video of IRS agents training with AR-15 rifles, Bright said, “They’re doing assault-weapon training, the Brown Shirts are next because that’s the enforcement for Obamacare. If you don’t have an IRS, you don’t have Obamacare. That’s the mechanism that’s controlling our lives for far too long.”

In a congressional district in northern Virginia, state Sen. Richard H. Black is contesting the Republican primary to replace longtime party stalwart Rep. Frank Wolf. Democrats, however, have uncovered a video of Black talking about his opposition to making spousal rape a crime. He said, “I do not know how you could validly get a conviction of a husband-wife rape, when they’re living together, sleeping in the same bed, she’s in a nightie and so forth. There’s not injuries, there’s no separation or anything.”

Mississippi state senator and Tea Party candidate Chris McDaniel is mounting a primary challenge to Sen. Thad Cochran (R-MS). Last week, Mother Jones surfaced comments McDaniel made about his unhappiness with the lack of Muslim villains in Hollywood films. McDaniel said, “They'll go out of their way to find some Russian white guy that's just nuts, and he's the terrorist, which I've never seen that. But the Muslims, they've just disappeared from Hollywood's radar.”

Greg Brannon, the North Carolina Republican Senate candidate endorsed by Sen. Rand Paul (R-KY), likened being on food stamps to slavery. "The answer is the Department of Agriculture should go away at the federal level," Brannon said in an interview with the North Carolina Tea Party. "And now 80% of the farm bill is food stamps. That enslaves people.”

All in all, seven of the 12 GOP senators up for reelection in 2014 are facing primary opponents, which is a record number of challenges. The far right also plans to target 25 House races, highlighting the deep divisions within the Republican Party. Tea Party Express says, “The false narrative continues to be written that the Tea Party is dead and that 2014 will not be like 2010, but every month we see a strong example to the contrary.”