6 reasons female nudity can be powerful

A reporter's question about Lena Dunham's nudity pointed to a bigger issue: Naked women can threaten the status quo 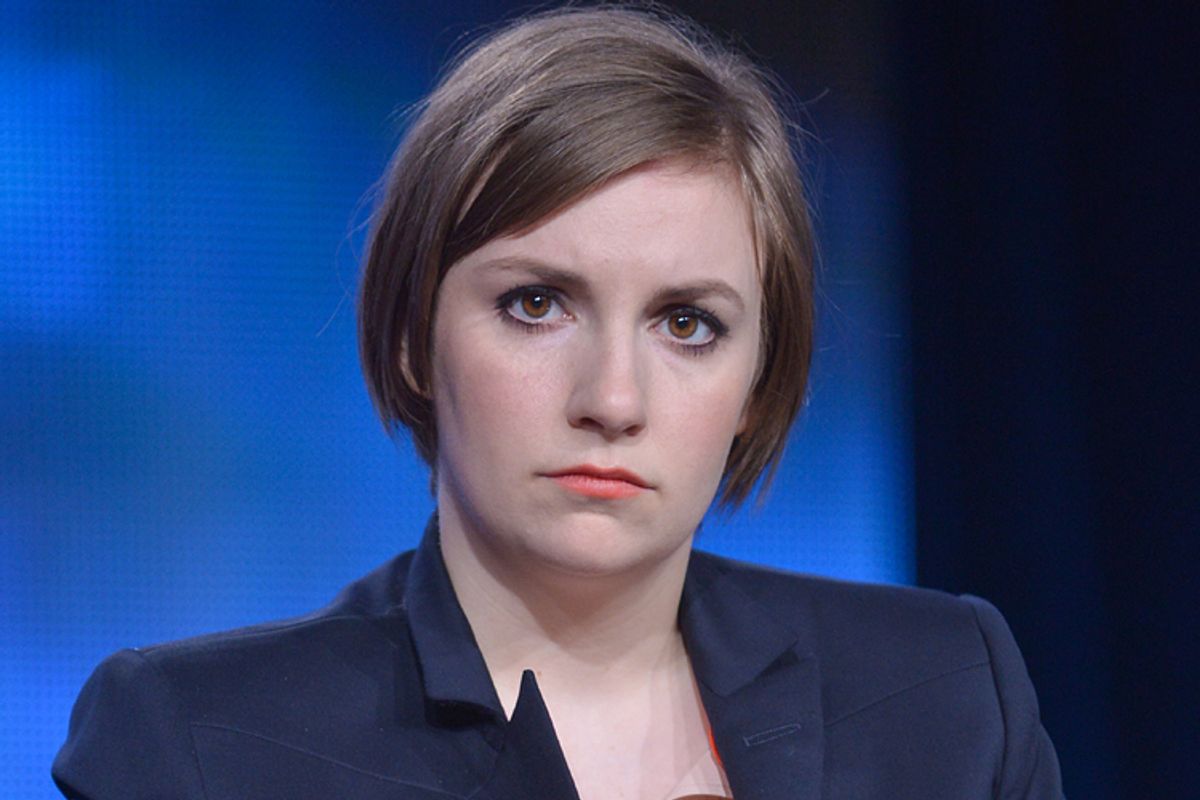 Last week, in the midst of what appears to be infinite fascination about Lena Dunham’s nudity, I saw a fundraiser for the documentary "Free the Nipple" and also, by coincidence, talked to Facebook spokespeople about that company’s ban on visible female nipples.  Like the reporter who recently asked Dunham why her "Girls" character was "often naked at random times for no reason," many people seem confounded by expressions of female nudity that are not sexual – because isn’t titillation the whole point of women’s nakedness? The real question about female nudity isn’t why anyone would want to show or see women’s breasts if they’re not titillating.  The real question is about who has the right to say what they’re for, where and when they can be seen and by whom. That’s about power.

While it’s irksome that the reporter questioning Dunham had to ask at all, it’s an important question. It revealed how little he, and so many others, has thought about a topic that affects all the women he’s ever known.

Why is exposing the world to non-sexualized female nudity important?

1.  Women too often are made to embody male power, honor and shame.  It’s not good for us.  Our bodies, and the bodies of people who are gender fluid and non-binary conforming, are sites of moral judgment in ways most men’s are not, especially in public and in protest. Some of us experience our bodies, in particular our nudity, as objects of repression, oppression and powerlessness. Representing them as no one’s but our own, counter to prevailing representations, is important.

2. Female public nudity is usually treated as a moral offense, a cause for concern and discussion, but it’s rarely allowed to be a source of non-sexual female power.  Male nudity is an entirely different thing.  When your average (straight) man is seen nude or semi-nude, it’s often considered humorous, as in frat boys streaking.  Or it’s a sign of virility and athleticism.  When it’s not, for example, the jarring images of the torture of Iraqi men in Abu Ghraib, men – vulnerable, humiliated and in pain – are feminized by their nakedness.

3. Female nudity is not just about sexualization, it’s about maintaining social hierarchies, like those of race and class.  Non-idealized female bodies used autonomously undermine a continuous narrative about body-based sex and race differences. When our cultural production is singularly focused on hyper-gendered, racialized and sexualized representations of nudity, it is easier to maintain racist and sexist ideas -- and nude female bodies outside socially approved, sexualized contexts challenge those.

The cultural regulation of female nudity and portrayals of sexuality is also a powerful way in which women’s bodies are used to pit us against one another and to reinforce hierarchies among men. Dark bodies, especially women’s, have always been available for public consumption: sale, rape, breeding, medical experimentation and more and the staying power of racist and sexist mythologies about white women and black men, rape and sex, are evident every day.  When women take ownership of the circumstances of their own nudity, they can defy others’ attempts to place them within these hierarchies. Dunham’s casual yet implicitly confrontational nudity in some ways refuses to cater to the myth of the vulnerable, pure, white woman that serves as a racist backdrop to portrayals of black women as inferior.  But very few black women have the ability to challenge dominant representations of their bodies and roles in the way that Dunham does, however, and that, too, is a function of our hierarchies.

4. Female public nakedness as protest or social commentary is not new and is critical, expressive and censored speech.  Lady Godiva is far from the only woman to use her nudity to achieve political ends. Barbara Sutton’s excellent recounting of her experiences with naked protests in Brazil is chock-full of historical and analytical insights.  Women have regularly used their nakedness to protest corruption and exploitation that go along with colonialism.  It’s among the most important reasons why Femen’s (topless) neocolonial narrative is offensive.  Prior to Tunisia’s Amina Sboui’s topless protest (after which she was arrested, subjected to a virginity test and fled), Egyptian activist Aalia Magda (also in exile) posted pictures of herself naked to protest Shariah law and censorship. Last January, hundreds of women in the Niger Delta marched half-naked in protests against Shell Oil Company practices in their community.  This was a repeat of earlier and similar protests.  These were peaceful, unlike last month’s in Argentina when an estimated 7,000 women stormed a cathedral defended by 1,500 rosary-bearing Catholic men. They fought, spat, yelled, spray-painted people and were accused, without a shred of irony, of gender-based violence against Catholic men. Many of these women were topless.

Nudity is also an enduring and essential part of the social critique of women artists.  The works of Lorna Simpson, Judy Chicago, Ana Medieta, Carolee Schneemann, Yoko Ono, Marina Abramovic, Hanna Wilke and so many others speak to identity, race, sex and class, using women’s naked bodies to do it.  When newspapers, movie theaters, cable and TV news, online media and social media refuse to show female nudity as part of female-directed political protest or artistic statement they deny them equal freedom of expression. When they do this while proliferating grossly objectifying alternatives, they silence them doubly.

5.  It’s not just that women have the right not to be sex objects, but also that we have the right to dismantle a discriminatory canon. In her 1977 essay “What’s Wrong With Images of Women?” art historian Griselda Pollock described a global, commercial, patriarchal visual culture that uses women’s bodies symbolically and makes it impossible for us to use our own bodies effectively in challenging that culture.  It’s a symptom of women’s position in the world that the efficacy of using our nudity to protest is tenuous.  Again, take Femen.  Set aside their execution and bizarre provenance and focus on two things: a) their use of naked female bodies to express aggression and rage, and b) the fact that they appear to meet the requirements of Western, increasingly global, ideals of beauty. They are thin, young, tall, topless and almost all white. In Louise Pennington’s words, they pass the patriarchal fuckability test.   And so media eat them up. The same media that every day make choices about what not to show: models protesting racism in their industry; angry, anti-Catholic feminist crowds;  peaceful, determined, old Nigerian women.   That’s not Femen’s fault.  They certainly aren’t the ones making media decisions about what makes the news. Did they use this bias? Should women?  Femen is exactly why many feminists doubt that female nudity can ever be an effective tool of activism.   However, each controversy that erupts allows us to think about how our own bodies and their “place” are used to undermine our intent and desires.

6. Self-defined public female nudity is a challenge to capitalism and its uses of women as products, props, assets and distributable resources. Nothing on Earth is used to drive sales and profits and display male wealth and status like women’s, often naked and semi-naked, bodies.  If you are thinking women make choices and are complicit, show contempt for other women because they are women -- well, of course some of them do. That is a defining feature of misogyny. Until we have equal access to resources, and are not subject to constant predation, this is a no-brainer. In the meantime, when women refuse to sexualize themselves and use their bodies to challenge powerful interests that profit from that sexualization, the words we should use aren’t  “lewd” and “obscene”; they’re “threatening” and “destabilizing.”

Women who use public nudity for social commentary, art and protest are myth-busting along many dimensions: active, not passive; strong not vulnerable; together, not isolated; public, not private; and, usually, angry, not alluring.  The morality offense is misogyny, not nudity.

In the U.S., there is nothing unique about reporter Tim Molloy's question about Lena Dunham's nudity.  Social media company policies, like many city statutes and public ordinances, mirror mainstream norms that clearly privilege heterosexuality, conflate women’s bodies with indecency and sex (a bad thing), and insist that those bodies (and sex) be held in reserve, distributed and consumed according to patriarchal rules. These rules, and the puritanical obsessions that drive them, are why we have billion-dollar “good girls gone wild” industries and an Internet fueled by gonzo porn, both carefully packaged pseudo-transgressions have little to do with women’s autonomy and do nothing to undermine a well-entrenched, misogynistic status quo.