Asian-American characters used to be a rarity on TV. "Elementary" and a few others are changing that 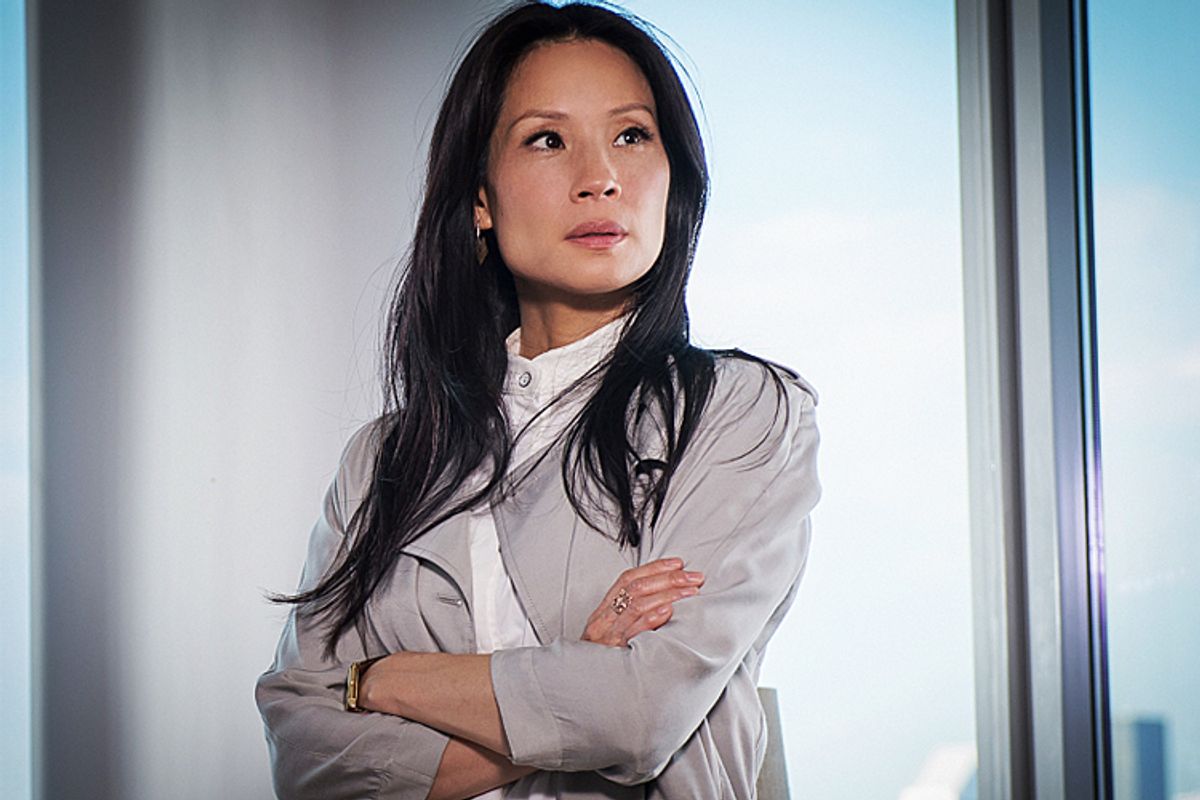 My younger sister and I used to play a game when we watched TV. It didn’t have a name, but I’m going to call it “Asians!” It was pretty simple, really; there was only one goal. Whenever an Asian – specifically, an East or South-East Asian – appeared on the screen, we’d cry, “Asian!” Then, we’d just continue watching “Charmed,” the evening news or whatever game show was on. We never arranged rules or consciously decided we would play. An Asian person on TV was so rare that we felt excited to point it out. Mind you, it didn’t have to be a main character or even a bit part to warrant the exclamation. We’d even yell when an extra in an insurance commercial or someone in the background of a nightly news story was Asian. In this game, there was no winner – it didn’t matter which of us managed to spot the Asian first. All that mattered was that there was an Asian on TV. Didn’t that mean we were all winning?

It’s been 20 years since we started playing “Asians!” but the frisson of seeing people who looked like me on the small screen has endured. One of the shows I religiously watched on weekend mornings as a kid was “Ghostwriter.” The show was about a group of child detectives who solved crimes with the assistance of a ghost who unraveled verbal clues. As well as appealing to the burgeoning reader and writer in me, “Ghostwriter” had a racially diverse cast, a real novelty at the time. More specifically, one of the mystery-solving kids was a young Vietnamese girl.

Although I had a Malaysian-Chinese background, I identified more strongly with Tina Nguyen (Tram-Anh Tran) than with any other television character. My suburban Australian upbringing couldn’t have been more different from her Brooklyn, N.Y., childhood (especially with added ghost), but even then I realized I’d immediately zoned in on her character because she was the only TV character who looked remotely like me. Although that wasn’t the only aspect of a character I could identify with, it made me feel like Asians’ experiences and dreams were worth portraying to a TV audience.

In the intervening years, there have of course been several Asian TV characters. Some of these, like the title role in 1956 series “The New Adventures of Charlie Chan,” weren’t even played by Asian actors. I can only imagine that other Asian roles sent their actors home despairing of ever playing a character that would be more than a flat stereotype. Things were slightly better in the '90s and aughts with the crop of “Doctor Asians”: Sandra Oh as Dr. Cristina Yang on “Grey’s Anatomy,” B.D. Wong as Dr. George Huang on “Law and Order: Special Victims Unit,” and Ming-Na as Dr. Deb Chen in “ER.” Though stereotypical in their professions – Asians are “allowed” to be doctors on-screen more often than they appear as politicians or dads or executives – these characters were mainstays in hit shows, with their own story arcs, foibles and personalities.

These days, it seems there are more Asian characters on TV than ever. From "Glee’s" singin ’n’ dancin’ Mike Chang and Tina Cohen-Chang (both, oddly, Changs, as Victoria McNally pointed out) to "The Walking Dead’s" zombie-killing Glenn Rhee and "Sleepy Hollow’s" Andy Brooks (um, a zombie), Asians are no longer doomed to serially portray backgrounders or doctors.

While this increased representation is welcome, Asian representation on TV has rarely been discussed with the same urgency as LGBT or African-American representation. And while it’s not No. 1 on my list of world problems, I can’t help looking back at my childhood self and what she would think of the depth and breadth of roles available to people who resemble her.

But there have been some signs of increased representation too. For example, casting decisions do change in response to practical market considerations; for example, there was an uptick in Asian models being cast in advertisements by luxury goods brands when Chinese consumers took over as the highest-spending luxury buyers in the world. And East Asian TV actors have at least one champion in ABC’s head of casting, Keli Lee, whose mission is “to change the face of television.”

As merely a casual couch potato, I can’t speak to whether Lee’s project has succeeded. What really impresses and draws me in about the Asian characters now on TV, though, is not their number but their variety. Asian characters on TV today range from the token or caricatured to more complex, fully layered humans.

Let’s start at my least favorite end of that spectrum. Many critics have noted that the Rebel Wilson–created “Super Fun Night” has problems (the New York Times called it “not super fun,” while the Daily Beast named it the “most disappointing” show of the new TV season). While I am definitely a fan of the hilarious and daring Wilson, “Super Fun Night” isn’t the show I’d hoped for either. One of its woes is the stereotypical treatment of its supporting characters, particularly main character Kimmie Boubier’s BFF/roommate Helen-Alice (Liza Lapira), a shy gal with a big-glasses geek vibe.

Helen-Alice is also Asian. In case you couldn’t tell just by looking, she is also a worrywart, usually playing the killjoy voice of reason in Kimmie’s wild schemes. She says things like, “I like rules.” Oh, I get it! Asians are meek and conform to societal norms! Right, I never would have realized. Thanks! Other Helen-Alice dialogue selections: “Every time I drop a fork, my parents say, ‘You shame us’” and “Refusing a guest brings dishonor to the family.” I’m not totally against these kinds of clichéd zingers, because clichés often come from truths. But because Helen-Alice is so thinly drawn (she doesn’t even have a surname), her Asianness and shy geekiness become her whole character.

A totally different approach to the studious Asian stereotype can be seen in Chris Lilley’s first mockumentary series, “We Can Be Heroes.” Those whose first exposure to Chris Lilley was the execrable “Angry Boys” might find it surprising that he’s capable of nuanced, heartwarming representations of non-white characters. But “We Can Be Heroes” character Ricky Wong was one of his most well-rounded and funny creations. (It probably helped that the most obvious visual marker of Ricky’s character was just a black wig, rather than the offensive blackface Lilley wore when portraying “Angry Boys” rapper S.Mouse.) Later series like “Ja’mie: Private School Girl” took his signature well-observed typologies to horror-show extremes, without tea and sympathy to sweeten them. But “We Can Be Heroes,” Lilley’s first offering, is arguably his best. Following six candidates for the Australian of the Year award, the series administered I-know-that-person social satire but balanced it with lots of heart.

Ricky was an endearing physics Ph.D. whose dad-style jokes (“I used to always say physics is fun, but I would spell it with a 'ph': phun”) and slightly incorrect syntax (“I’m known for a very comedy style around the lab”) struck delighted recognition into the hearts of Asian viewers like me. Lilley’s Cantonese-inflected English was pitch perfect, and capped off a character that was clearly a loving portrait. The mockumentary followed Ricky in his pursuit of efficient solar power, but also on a personal journey: starring in a university drama production. While there was a recognizably “Asian” twist to the tale – that he yearned to act, despite his parents’ disapproval – it read as a specific, individual story rather than a cliché. This is a testament to Lilley’s unforced performance and the emotional resonance of the good-hearted, optimistic Ricky.

On the other end of the Asian-representation spectrum is Dr. Joan Watson, played by Lucy Liu, on “Elementary.” In the show, a modern-day adaptation of Sherlock Holmes’ detective stories, Watson’s ethnicity is never an issue. Minor characters don’t blink an eye when she gives her obviously Anglo name, and nor do they subject her to racial taunts or innuendoes. Not that they should, but this kind of non-issue treatment means Watson is almost as far from a caricatured Asian character as you can currently find on TV. Sure, Watson trained as a surgeon (as did Arthur Conan Doyle’s original version of the character, John Watson). But when we meet her, she’s Sherlock Holmes’ live-in sober companion while he recovers from heroin addiction; she then becomes a partner in his detective work.

“Elementary” even finds a way to play with Asian family stereotypes. In one first-season episode, Watson’s mother visits her and seems dissatisfied with her ex-surgeon daughter’s job as a sober companion. Yet, as it turns out, this is not a case of high filial expectations; Watson’s mother is merely concerned that her daughter isn’t challenged enough, and therefore unhappy. The character of Joan Watson is almost colorless, and while this is by no means a benchmark by which all characters of color should be measured, seeing an Asian main character whose race is never an issue in her personal or professional life is a welcome change.

Somewhere in the middle of this range falls community-college Spanish teacher Ben Chang (Ken Jeong) in cult hit “Community.” Chang launches his class with a rap (“Not another teacher with this much flavor”) and deflects questions about why an Asian-American man is teaching Spanish with a hysterical declaration that he is “a Spanish genius.” The show, famed for engaging playfully with storytelling archetypes, acknowledges Asian-character clichés. In an episode where the students are pitted against one another in a paintball game, Chang suddenly enters the frame, cigarette dangling from the corner of his mouth, to dramatic Chinese music, à la kung-fu movies of the '60s and '70s. But there’s plenty of Chang that is just his own unhinged individuality. Jeong’s talent for slapstick has seen Chang tase himself, oil his naked body to climb through vents, and throw arm-flailing tantrums that would put a 3-year-old to shame. In this ensemble show, Chang is the over-the-top hysteric, not “the Asian one.”

With the range of Asian characters now on TV, my childhood game may have lost its significance. Certainly it seems like overkill to be shouting “Asian!” every time characters like Joan Watson, Chang and Helen-Alice get screen time. While some TV characters still rely heavily on Asian stereotypes, plenty have emerged whom I can adore or revile – not simply because of their race, but because of their unique, complex personalities and stories, of which race is just a part.

Estelle Tang is an Australian writer and critic based in NYC. Follow her on Twitter at @waouwwaouw and read more at http://estelletang.tumblr.com.