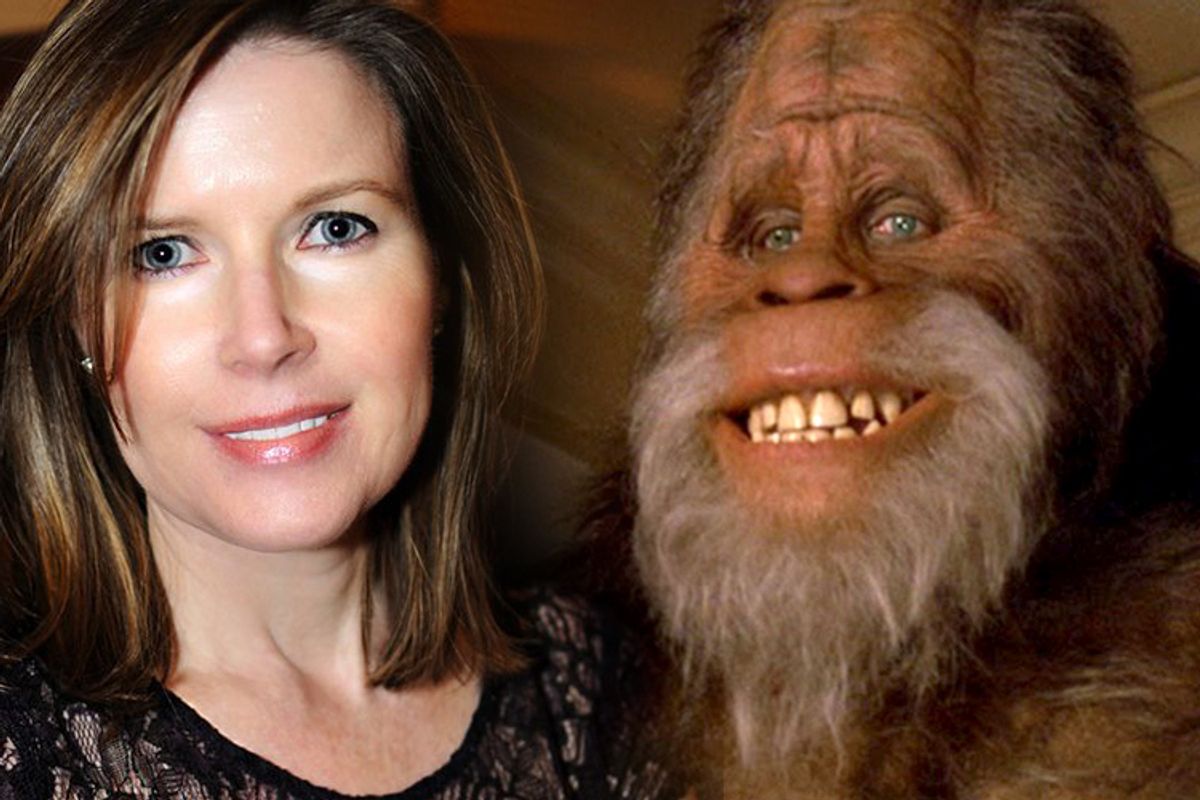 Virginia Wade; Harry of "Harry and the Hendersons"
--

Forget blood and fangs. Move over, ball gags and bullwhips. Now it's all about Bigfoot's big dick.

At least, that was the message last week amid a media frenzy over the discovery that sasquatch erotica is not only a thing that exists in the world, but a thing that has made Virginia Wade, a self-publishing "stay-at-home mother," a whole lot of dough. The "Twilight" and "Fifty Shades" comparisons practically write themselves.

So, tell me, how does one end up writing monster erotica?

I was dabbling in a bunch of short stories around 2011 and all these "daddy stories" were on [the erotica bestseller list]. I never had success with these silly daddy stories, so one day this crazy idea came into my head. I was kind of rebelling; most of my colleagues were writing these pseudo-incest daddy stories -- with no real incest at all, I mean, none of the characters were blood related -- so I said, “I’m going to write something totally freaky and crazy.” Bigfoot sprang into my mind.

The longer I'm in this business and reading other people's work, I'm beginning to realize that it's this capture fantasy, where you kind of have this thrill about being kidnapped and ravished, but of course you would never want that to happen to you in real life. The danger of it, the dark quality to it and the taboo nature of it, I think that all appeals -- and actually to mostly female readers. When I started writing erotica I thought I was writing for men.

Also, it's campy and funny and I didn't take it too seriously. Actually, I don't know why any readers would read my book [laughs]. I think it's just that it's so out there, so out of the realm of possibility. That's why these dinosaur erotica books are so popular and these tentacle books are so popular. The chances of you getting tempted by a tentacle are, you know, pretty slim. Why do we read books? So that we can go somewhere else for a while and experience something that will never happen to us.

Do you find your books arousing?

When I write them they do kind of arouse me. They're so filthy, oh my god. I've gotten some emails and messages from people telling me that, uh, yeah, they're enjoying my books and thanking me for a good time.

How does that feel?

Of course, the massively popular “Twilight” series is about sexy monsters as well. Are we having a sexy monster moment? What's going on?

Probably. I just read "Fifty Shades of Grey," and I know I'm really late to the party, but it's women's fascination with dark and dangerous men. It's the unattainable man, wanting to get him to fall in love with you. Except, I don't think Portia [the heroine in the Bigfoot series] is really trying to get Leonard [the sasquatch] to fall in love with her -- although they do, after a lot of sex.

So, what kind of a lover is Bigfoot, exactly? Tender or rough? Giving or selfish?

He's surprisingly gentle. The women really, really enjoy everything he does to them. It starts out -- I can't call it rape because then I'll get in trouble -- it's one of those forced seductions. It's not really any worse than a bodice-ripper romance -- although my stuff's pretty detailed. I'd forgotten how raunchy it was until someone quoted back something I'd written and it was something to the effect of "semen dripping from eyelashes" [laughs].

I read that your father, an English teacher, edited your books and that your mother has translated them into German. Was that awkward?

Um, yeah. He had edited some of my earlier romances but when I first started writing erotica, I thought, "Oh god, I can't." I was mortified. He's pretty open-minded, though, so I started sending him my raunchy stuff. The poor guy has suffered through almost everything I've ever written.

How has Amazon’s crackdown on erotica impacted your sales?

It impacted everyone's sales, everyone who was making their living off of naughty stories, we have all seen sales go down. Some people dramatically. I noticed a significant drop in September of 2012, almost overnight. Ever since, things have been sliding. I was starting to lose a couple hundred dollars a day and by the end of that month I was down by a couple thousand. You notice that. It was the beginning of the end of the monster sex ride; I could see the end of the road. In the spring of 2013 they really cracked down and then I got fed up and thought, "Screw you all!"

What next for you after Bigfoot?

I had started to phase Virginia out [to begin writing under a different pen name], but I was in an anthology a couple months ago that was really successful and we all got New York Times bestseller statuses and it's a shame to waste that. So I need to think about what direction I need to take her in -- maybe working on longer erotic novels, maybe maturing her a little from her sleazy, campy Bigfoot days. I'm kind of motivated by sales numbers. I tend to want to write things that I hope have a chance of selling well. It gets harder and harder with more people coming into self-publishing, because there's a glut of books on the market. Now you have to have some sort of marketing plan.