Empty NSA reforms will change nothing. The surveillance state subverts the law -- and the president is complicit 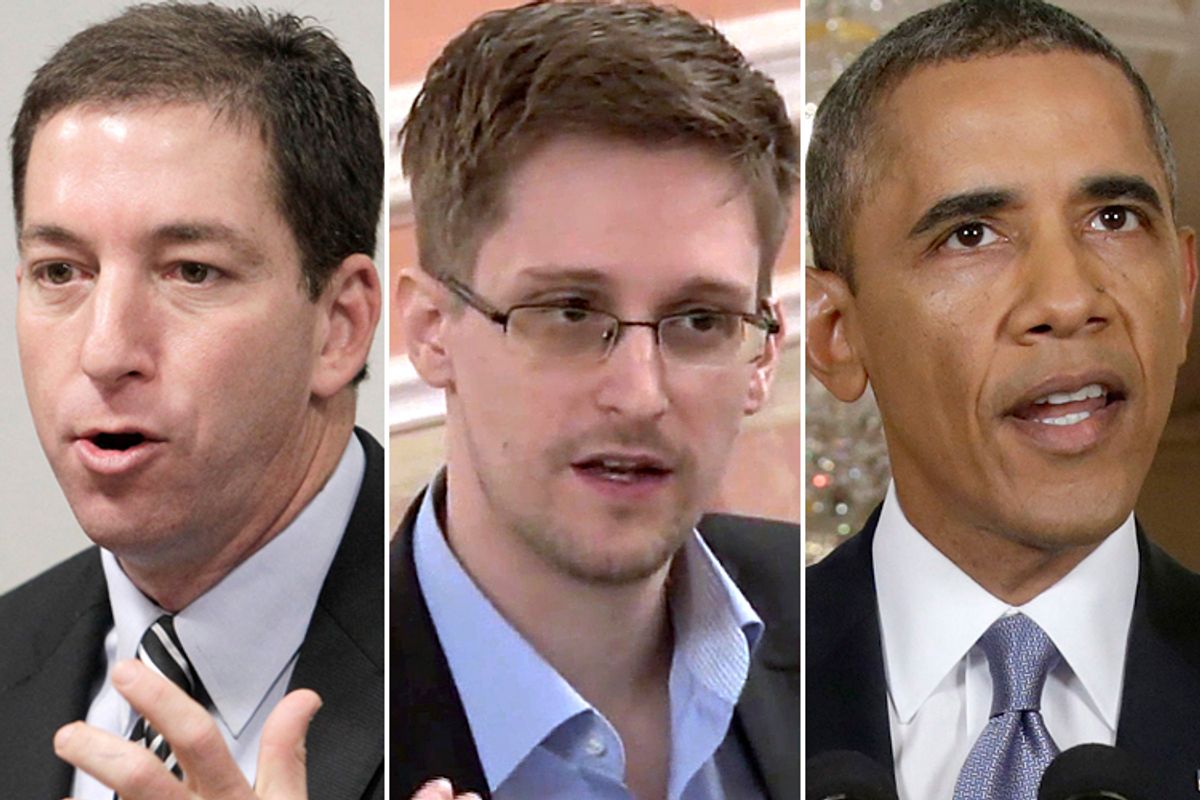 The deed has been done, there now for all to see. President Obama’s speech on the authority of the National Security Agency confirms that Americans live -- and will continue to live -- in a surveillance state until they do more about it than managed so far.

A lot of good commentary has been written. Few Americans buy the ruse that the president’s promise to “reform” the institutional controls of American intelligence amounts to anything. Even the polls tell us this. Glenn Greenwald, in his Guardian column, usefully notes that this trick has made many appearances in history in the face of widespread objection: “Make the system prettier and more politically palatable with empty, cosmetic ‘reforms,’” Greenwald writes, “so as to placate public anger while leaving the system fundamentally unchanged, even more immune than before to serious challenge.”

Perfectly clear, and the historical perspective is essential to a good understanding. Now we need to investigate just what is being done. There has been a transaction; 320 million Americans are one-half of it. Of what nature, this deal?

I see two core features and then a need for taxonomy: We have to name the new thing within which we are to be submerged. To the bullets, then:

* The thought that privacy must be balanced with security is a red herring even Obama identified as such prior to taking office. The pith of the surveillance question lies in law. And we have crossed the border into Orwell country in the legal dimension.

The president invokes law without hesitation when discussing the NSA’s powers. These powers are inscribed in law, he reminded us in his speech. “It depends on the law to constrain those in power,” he said as he sought to allay fears that, for me, are far greater than any fears I am supposed to have of terrorists.

This is why I invoke Orwell. The operative laws Obama cites were concocted after the 2001 attacks by should-be white-collar criminals such as John Yoo, the White House counsel (now tenured at Berkeley Law, if you please) who gave the Bush administration legal backing for warrantless searches, wiretaps without judicial authority, Guantánamo, “renditions,” “enhanced interrogation.” Some large proportion of these laws and practices is unconstitutional when plain English prevails. So Obama’s true topic is law in the service of subverting law.

Instead of law, the ruling principle is precisely what the president insists cannot be. It is individual discretion, the stripping back of law, the shielding of prerogative from law. This has been a prominent strand in conservative American thinking since corporations began dismantling the New Deal during the Reagan era. Glass-Steagall, which regulated banking, was a notable repeal — and gave us the 2008 financial crisis. It is of a piece with the intellectual currents running beneath the surveillance policies Obama cannot now own up to they are so beyond decent.

The question of abuse becomes key in this connection. Read the speech. Obama spent an inordinate amount of his podium time protesting that there is no record of the NSA having abused its powers. This is of course radically untrue, even by official accounts. The president and the spooks have simply redefined “abuse.” See what I mean about old Orwell, about plain English?

A piece in the Times just before the speech followed Obama’s evolution — is that what it was? — from constitutional advocate to NSA defender. At the top you get the young senator and the new president asserting the supremacy of law. Then something else. “He has more information than he did then,” a former White House aide says. “And he trusts himself to use these powers more than he did the Bush administration.”

Trust cannot be a substitute for law. It cannot carry over from one administration to the next, obviously. One purpose of law is to remove the obligation to trust in these contexts. The paradox here: When Obama cites law, he has not earned public trust.

A final point in the matter of law. Theoretically postulated events cannot be invoked to justify laws or practices otherwise questionable. This way lies tragedy. We end up burning the hamlet to save the hamlet.

* The surveillance state rests upon a defective principle fated to produce undesirable consequences even as it proves ineffective. This is the practice of treating symptoms and flinching from causes. Cold War history is rich in examples. Americans took no interest in the origin of Vietnamese nationalism, only in eradicating it. No administration has concerned itself with the appetite among Americans for drugs, only in keeping it unsatisfied.

Post–Sept. 11 was a key escalation of the flinching habit. For a time there was much rumination as to why. Poverty, deprivation, political suffocation: These bred anti-Western militants as fouled pools breed mosquitoes. We needed third-world Marshall Plans. “Thinking, not vengeance,” an opinion piece in the Boston Globe urged. Remember any of this?

I hope so. It lasted four months — until the “axis of evil” speech the following January. That launched the Bush people’s counterattack. Richard Perle had already supplied one of the classic stupidities of the time: “We must decontextualize terrorism. Any attempt to discuss the roots of terrorism is an attempt to justify it. It simply needs to be fought and destroyed.”

This thought echoed all over the Arab world, as a thorough Web search will reveal. Translation: No need to understand any of the whys. Obama has done nothing to correct this fundamental error. His assumptions as to the “war on terror"  — its existence and what to do about it — are no different than Perle’s. At the core of the surveillance state lies the principle of decontextualization.

* Language is an essential instrument in the surveillance state. It renders objectionable practices acceptable. That is why we get phrases such as “enhanced interrogation” and can excuse ourselves from talking about Americans torturing other people. This problem unloads on the very term “surveillance.” There is nothing intrinsically wrong with the act of surveilling something, after all.

What to call the apparatus being built around us, then? I have no certain thought, but a term must be considered as of last Friday. Let us put it in the form of a question: What good is a surveillance state without a police state?

The phrase is not acceptable in polite company, I understand. One is made out to be foolish. And I do not invite anyone to buy into the thought; I may not myself.

I propose merely that “police state” gets on the table now, and we can all decide upon it together. I challenge any reader to explain in the comment box how this is any longer inappropriate as a term deserving of a place in the conversation.

The meaning lies here: A police state — pick one and think about it — consists of more than distant intelligence-gathering agencies, and even these can now crunch data to the consistency of talcum powder. Under construction is a corridor connecting the NSA’s computers, via the FBI and other domestic agencies, with local law-enforcement down to old Barney Fife’s Mayberry. The cop who nails you in a speed trap will have your story on that laptop mounted next to his steering wheel and recite back some infraction you cannot even recall committing and maybe did not.

This at least suggests itself as the contemporary police state, does it not? Our physical selves and pasts are reproduced as electronic simulacra moving through streams of binary data signals that circulate infinitely and can never be erased. “Somebody has to collect all these data,” Obama tells us.

We are playing with gasoline and matches just as our leaders did in the anti-communist panics of the 1950s. Now and then share something important. America was founded amid fear; we cannot seem to outgrow it. Down the centuries it causes a fundamental confusion between risk and threat. Risk is inevitable — part of being alive; mix it up with threat and you are paranoid, obsessed with an unachievable degree of “security.” America cannot any longer indulge in its quite old paranoia.

One final thought. I do not find Obama’s hand in consolidating a surveillance state forgivable. He has delivered us to a very dreadful moment in history. The coup his people engineered in Egypt last year is the equal of any in the history books — from Mossadegh on through Lumumba to Allende. He has just now landed Americans with decades’ worth of undoing at home, and undoing takes immense effort. We have to let our dream of Obama go. Democrats need to find a new place for their hopes. Eisenhower had more conscience.

So much of Obama’s speech last Friday was objectionable. Paul Revere was a spook. There were Civil War spooks who helped save the Union. “After all, the folks at NSA and other intelligence agencies are our neighbors. They’re our friends and family.”

Cut it out, Mr. President. NSA “folks” as neighbors is not a thought you want to run with; they are not anyone’s friends. This is apple pie rightism; were it persuasive it would be frightening, as it was in the early Cold War days.

It was the reference to Martin Luther King that was most audacious. Consider what J. Edgar Hoover and the former surveillance state did to Martin Luther King and you may choke, too. One went straight to the Lloyd Bentsen remark in his vice-presidential debate with Dan Quayle, 1988. “Senator, you’re no Jack Kennedy.” Shame on you for the invocation. What the president presides over now would make King sick. You betray the things he loved, the things we loved him for loving.