Down goes McDonnell. And Christie. And Cruz. The media’s fondest 2016 GOP fantasy is coming completely undone 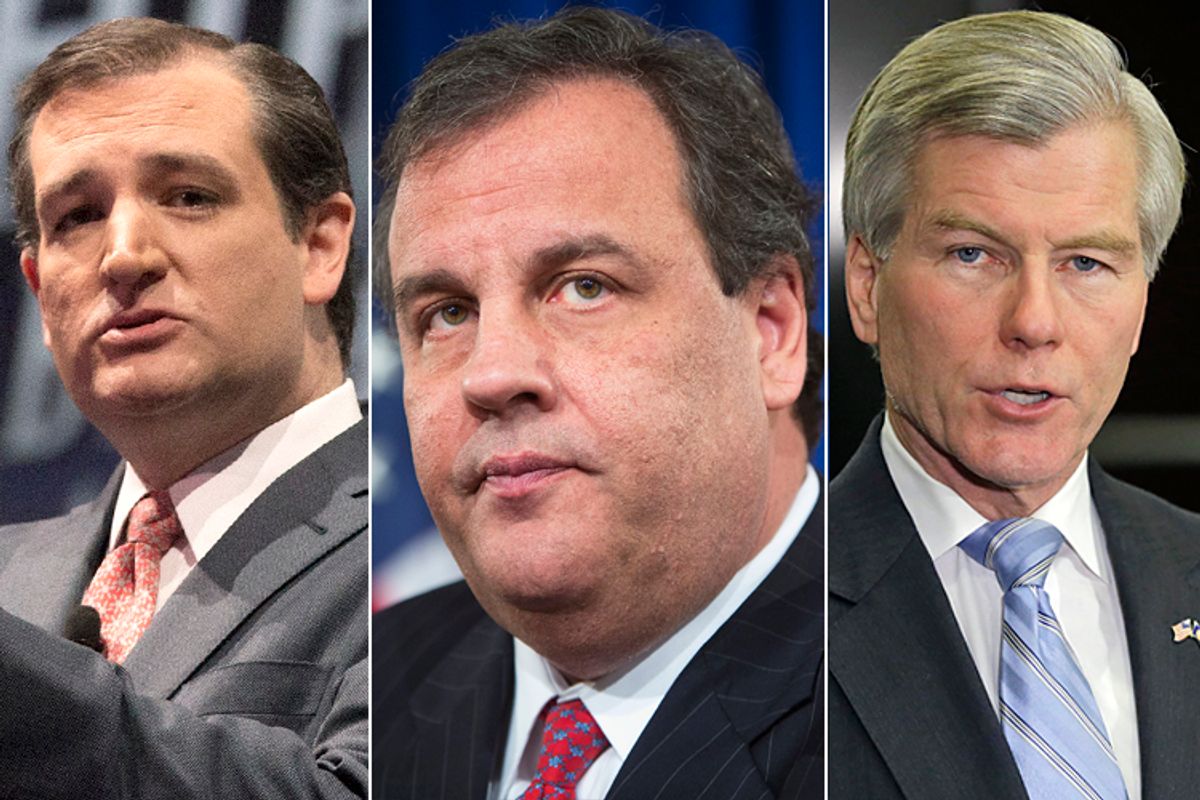 Last time I saw former Virginia Gov. Bob McDonnell, he was sashaying around Tampa, Fla., in 2012 as though we'd see him again, big time, in 2016. Elected with Chris Christie in that 2009 statehouse rebuke to President Obama, he’d been a rising star, tapped to make the 2010 GOP State of the Union reply and an opening night convention address in Tampa. He made sure to shake my hand as I replaced him in the shared CNBC/MSNBC makeup cubby off the convention floor.  Good times. Now McDonnell’s only thoughts of 2016 are making sure he doesn’t spend it in prison, as he fights public corruption charges for taking an estimated $165,000 in gifts from a grifting donor.

Meanwhile his class of 2009 buddy Chris Christie looks at McDonnell and has to worry: the wheels of justice turn slowly, but they turn, and they are inexorably turning now for Christie – lots of them. Between the genuine George Washington Bridge retribution scandal involving his closest aides, and newer charges that his lieutenant governor threatened to use Sandy aid as payback if Hoboken’s mayor blocked a Christie donor’s development deal, the New Jersey governor is vulnerable on more fronts than McDonnell ever was, though to be fair, investigators aren’t in Christie's kitchen – not yet, anyway.

So concern-troll Hillary Clinton all you want, Beltway pundits. You’re missing the only 2016 story that matters, and not surprisingly, it involves a lot of you. The mainstream media fantasy of a remarkably “deep bench” of 2016 contenders for the GOP was never founded in reality – but such a bench, if it ever existed, is surely in splinters today.

That “deep bench” metaphor, by the way, seems  to have come directly from Mitt Romney’s V.P. vetter Beth Myers, although you had to ask, then and now: if the GOP bench was so deep, how did they wind up with Paul Ryan, who couldn’t even carry his home state of Wisconsin? (More on Ryan in a moment.)

But for now, let’s revisit that bench: It’s not just McDonnell (No. 3 on the National Journal’s 2012 “deep bench” list for 2016) and Christie (he was No. 1) who are finished. No. 2 contender Sen. Marco Rubio is, too: He made a play for the center with immigration reform, panicked and tacked right, and now he’s nobody’s top choice.  Louisiana Gov. Bobby Jindal (lucky No. 7!) flamed out after telling the GOP to stop being "the stupid party," then acting, well, stupidly, and becoming, by August of 2013, the most unpopular Republican governor in the country (and that's saying a lot).

Texas Sen. Ted Cruz isn't even on the list, but he deserves some attention. He came out of nowhere in 2012, but he’s already imploded spectacularly, going from a top-tier contender in early polls to far behind because of his self-promoting and nasty (not to mention extremist) brand of politics.

Sen. Rand Paul made many lists (the National Journal's No. 6), and he still has a few admirers, especially among his father’s old fans. But Paul has proven to be a lightweight with a plagiarism problem whose one somewhat interesting attribute – his national security and foreign policy skepticism -- is politically suicidal with the GOP (and most of the Democratic) establishment. He will not be the GOP nominee.

Then there's Rep. Paul Ryan, last seen reinventing himself as a friend of the poor and a fan of Pope Francis (even if he couldn’t resist lecturing the pope for his faulty knowledge of capitalism).  He plays a wonk on TV, but badly; his only contribution to the 2012 ticket was to hurt Romney. While the National Journal had Ryan at No. 5, no defeated V.P. candidate has ever become president except FDR, and no number of loving McKay Coppins profiles will ever make Paul Ryan FDR.

While we’re in Wisconsin, let’s look at Gov. Scott Walker, who’s getting a little play now that Christie is tumbling. Walker is a charisma-free Koch brothers toady who has more in common with Christie than alleged statehouse pragmatism:  his own ethically challenged aides, back in Milwaukee. Three Walker associates were convicted in an earlier probe into campaign finance violations; last October, a new investigation began. Walker was named one of the nation's "worst governors" by the Citizens for Responsibility and Ethics in Washington. He is not ready for the glare of a national campaign.

That leaves Jeb Bush (National Journal's No. 4*). He and his brother are disliked by the Tea Party, but the former Florida governor is beloved by the GOP establishment; he could be said to embody it. But is the country ready for another Bush? His own mother says no, and his wife, Columba, is also said to be against it. And as long as pundits insist Hillary Clinton’s ties with Wall Street could hurt her in this populist era – and they could – Bush’s will do the same thing, because they’re even closer. He went to work for doomed Lehman Brothers after leaving the governor’s mansion, because apparently Bushes aren't wealthy enough.

Then, sadly, Florida’s state and local pension funds lost $1 billion when the firm went bankrupt. Bush came in for blame, since he was also on the State Board of Administration, which invests public funds, but he insists he played no role in advising public fund administrators to use Lehman. Still, the potential conflict would get new oxygen from a national race.

So let Larry Sabato and Ron Fournier concern-troll Hillary Clinton. It's true, she may not run, and if she runs, she may not win. But if you want to be president in 2016 -- man or woman, black or white, Republican or Democrat -- you'd rather be Hillary Clinton than anyone else in the world.

Especially anyone on that shattered GOP bench.