When companies break the law and people pay: The scary lesson of the Google Bus

All over America, big corporations flout laws or even make their own, while ordinary people face harsh penalties 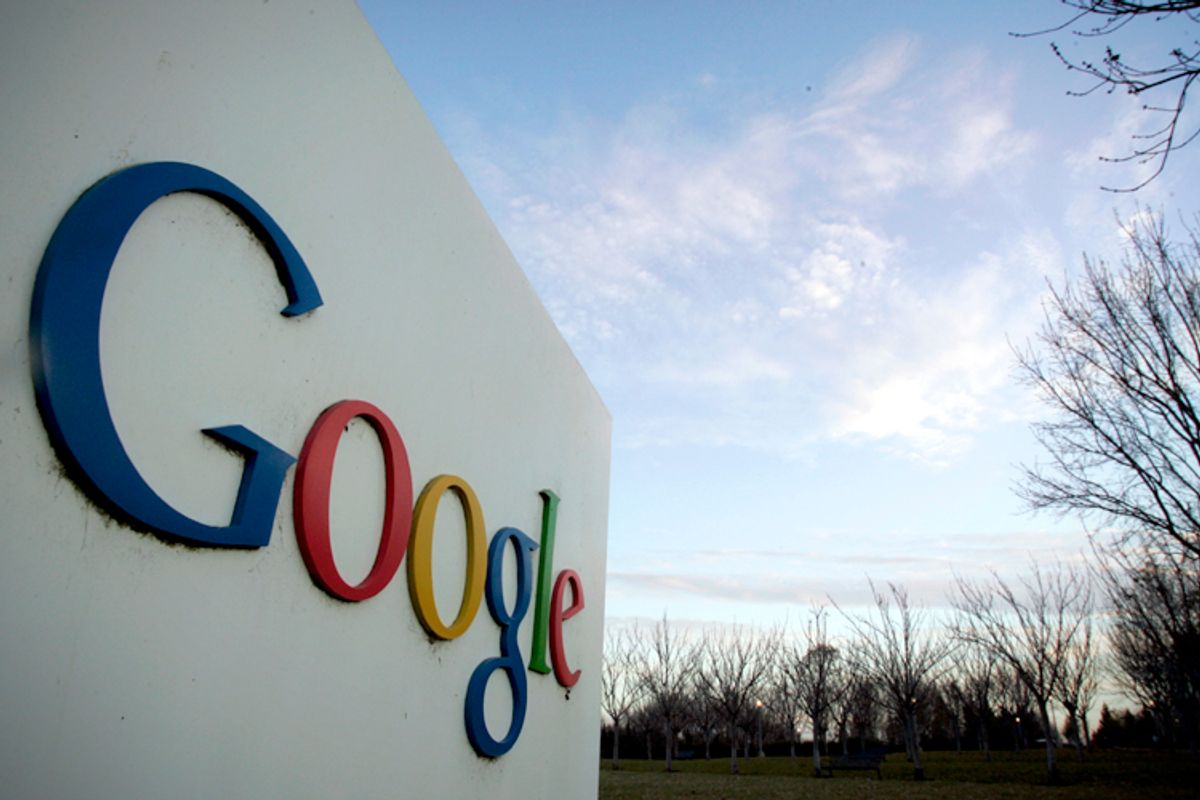 Ever since Rebecca Solnit took to the London Review of Books  to ruminate on the meaning of the private chartered buses that transport tech industry workers around the San Francisco Bay Area (she called them, among other things, “the spaceships on which our alien overlords have landed to rule us,”) the Google Bus has become the go-to symbol for discord in Silicon Valley.  First a Google Bus piñata was smashed to pieces at a rally in San Francisco’s Mission district last May.  Then protesters drove a fake Google Bus in the annual Pride Parade with props linking the shuttles to gentrification, eviction and displacement.  By December, when activists blockaded an actual Google bus on the street, the city and media were primed for the street theater stunt heard round the world. This frenzy seemingly culminated yesterday when, following another morning blockade and protest and several hours of contentious public comment, San Francisco’s Municipal Transportation Authority unanimously approved a plan to begin regulating the shuttles by requiring them to obtain a permit and pay a $1 per stop fee.

The Google Bus (I use the term, as most Bay Area residents do, to refer generally to private buses chartered by employers, including Facebook, Genentech, Apple, Yahoo and others) means something different to everyone.  For tech companies, it is a recruitment tool, a means of burnishing their environmental bona fides, and a way to extend the work day by several otherwise unproductive hours.  Shuttle riders, perhaps prompted by corporate talking points, suggest that without the buses they would just drive to work, adding more cars to the streets.  The shuttle companies act like they are running a jobs program.  (Michael Watson, a V.P. with Bauer’s Intelligent Transportation, said his company employs about 400 people.  He would not disclose how much the bus drivers are paid, but he did state that they are not unionized.)  Housing activists point out that the buses serve people who are driving up rents, displacing lower-income residents.  Pedestrians and bikers complain of the buses clogging narrow streets.  Riders of Muni (the city’s bus system) complain of delays and congestion because the shuttles use Muni stops.  Some fear that the shuttles are turning San Francisco into an expensive bedroom community for Silicon Valley.  Others point to the shuttles as a harbinger of the privatization of public transportation.

As local politicians, activists, tech workers, concerned residents and bus company executives argued for and against the proposal at yesterday’s hearing, it became clear that the issue of the Google Bus has become an argument about what, exactly, that issue should be.  Is the Google Bus everything that is wrong with San Francisco, the Bay Area and America today?  Is it a convenient scapegoat, as many have written, or is it actually causing gentrification and displacement, as a study by University of California at Berkeley’s Alexandra Goldman suggests.  (Goldman’s analysis found evidence that rents near shuttle stops are rising faster than those farther away.)  Is everyone overreacting because, as one tech worker testified, “It’s just another way to get to work”?  At various points during the hearing, speakers addressed the specter of future Google Bus protesters, exhorting them to turn their attention to affordable housing.  Christa Jones, a shuttle company employee, shouted to the assembled crowd, “Wake the hell up! Stop trying to put transportation and housing issues together!”

The suggestion that people who object to the buses are confused, unintelligent or being misled is unlikely to endear them to the shuttle riders.  I don’t think anyone believes that the buses are the one and only issue facing San Francisco, or the most important one, or even that getting rid of the buses will bring a halt to gentrification and displacement.  Edward Reiskin, the director of the MTA, started the hearing by stating that, “The buses have become a physical manifestation of a lot of issues, and we’re not proposing to fix all those problems.”  Indeed, it was never possible that the Google Bus could carry the burden of all the outrage, indignation and fear felt by longtime and low-income San Francisco residents at the changing face of the city.  But while the debate over gentrification, affordable housing, income inequality and the tech industry continues, I would argue that the Google Bus is actually a perfect emblem of another problem facing San Franciscans and all Americans today, and it’s a problem that isn't exclusive to the tech industry.

During yesterday’s hearing, Michael Watson, the shuttle company representative, defended his company’s operations, saying, “We’ve used Muni stops for 10 years cooperatively.”  It takes a certain amount of chutzpah to recast a behavior that is, in point of fact, illegal as a virtuous act of private-public collaboration. San Francisco’s Curb Priority Law prohibits non-Muni vehicles from blocking bus stops, a law that carries a $271 fine.  Bus blockaders say that the various tech companies owe San Francisco $1 billion in fines for their illegal use of the stops over the past decade.  (San Francisco Bay Guardian reporter Rebecca Bowe calculated the unpaid bill as closer to $500 million to $600 million, still a significant amount of money compared to the transportation agency’s annual budget of $800 million.)  Google, Facebook and Apple aren’t facing millions in unpaid parking fines, however, because the MTA hasn't been writing the tickets.  Since the shuttles began using public bus stops, they’ve simply flouted the law without consequences.

Not only has San Francisco allowed tech companies to violate the law with impunity, but now that public outcry has made some kind of action politically expedient, the MTA seems to have allowed the industry to write the very regulations that are supposed to rein them in.  The $1/stop program was developed following meetings between tech companies and the MTA convened by the Bay Area Council, a pro-business policy group that was vocal in its opposition to union demands during the recent Bay Area Rapid Transit labor dispute and strike.  Under the guise of regulating the shuttles, the program regularizes the status quo – allowing the private buses to continue using the approximately 200 bus stops it already uses for a nominal fee.  (Large employers like Google are expected to pay about $100,000 per year; were Google to be charged the $271 fine, its bill would balloon to $27.1 million each year.)  The low fee is due to the fact that the agency is constrained by state law from charging the companies more than the cost of implementing the program.  However, if Muni simply enforced its current laws instead of creating this new program, the monetary benefit to the city would be significantly higher.

This might not anger San Franciscans so much were it not for the fact that the MTA does enforce its laws, harshly, against individuals.  Several speakers at the hearing had received tickets for the same behavior Google buses get away with daily – pulling into a bus stop to drop someone off.  And while the $271 fine may be insignificant to a company like Google, it’s a potentially devastating sum for people struggling to get by in a city where the cost of living seems to rise by the day.

Meanwhile, since 2005, MTA has been engaging in aggressive proof-of-payment fare enforcement on bus lines.  According to a report issued by the Data Center, Urban Habitat and local grass-roots organization People Organized to Win Employment Rights, these enforcement actions disproportionately target working-class communities of color.  Just last week, I witnessed one of the MTA’s “saturation stings” – more than a dozen transit agents and armed police officers waited at a busy bus stop in the Mission District, stopping every person who exited the bus. Riders caught without proof-of-payment face a $100 ticket, but the consequences can be even higher for some.  Several immigrant riders caught for fare evasion have been turned over to Immigration and Customs Enforcement, despite San Francisco’s status as a Sanctuary City.   Jane Martin, the political director of POWER, told me that enforcement actions frequently turn violent, with officers chasing down fleeing passengers.  The most tragic consequence of amped-up fare enforcement has been the death of Kenneth Harding Jr., a 19-year-old who was shot and killed by police when he ran away after they demanded proof of Muni payment.

Far from recovering money lost to free riders, the enforcement program is actually a huge money loser – the POWER study found that in 2009, the enforcement program cost $9.5 million and only recovered $1 million in revenue.  What it has accomplished is creating an atmosphere of fear and distrust amongst bus riders, especially in communities of color like the Bayview.  With the city making public transit riders feel like criminals in their own city at the same time that it turns a blind eye to infractions by private buses, it’s no wonder anger has erupted and residents like Annabel Bolanos call the Google Bus “Conquistador transportation.”  The small size of the proposed fee for the shuttles only adds insult to injury.  Speaker after speaker at the MTA hearing objected to the idea that the corporate buses would pay half the $2 Muni fare for individuals.

This is the contradiction of the Google Bus, and it’s one that should resonate across the country.  The Google Bus is the embodiment of a system that indemnifies the actions of corporations while increasingly criminalizing and punishing individuals.  Google and its ilk have always known that they could break the law right up until the day they were invited to make new laws.  That is the power of corporate wealth, and in San Francisco as in the rest of the country, it rules supreme.

We see this pattern repeated over and over again.  Currently, hundreds of thousands of West Virginians face uncertainty as to the safety of their water supply thanks in large part to a political system that doesn’t bother to regulate companies storing toxic chemicals right next to a water treatment plant.  In New York, as "The Daily Show’s" Jessica Williams pointed out, Black and Latino men face constant police harassment and brutality for the crime of walking in their neighborhoods while the Wall Street bankers who engaged in massive fraud not only walk free, but continue to pocket massive bonuses.  It was individual homeowners who paid for the subprime mortgage malfeasance of predatory lenders, and it will be individual Detroit pensioners who pay for the city’s bankruptcy rather than the banks whose loans must be repaid.  Our Congress is too busy punishing the long-term unemployed to bother punishing employers who engage in rampant labor law violations.  Our jails are overflowing with nonviolent drug offenders, but no one has gone to jail for causing the Great Recession.

We’ve been told by the Supreme Court that corporations are people.  This ruling has given corporations untold influence over how our laws are written.  When will corporations be asked to obey those laws as well?