How "Candy Crush" is ruining the economy 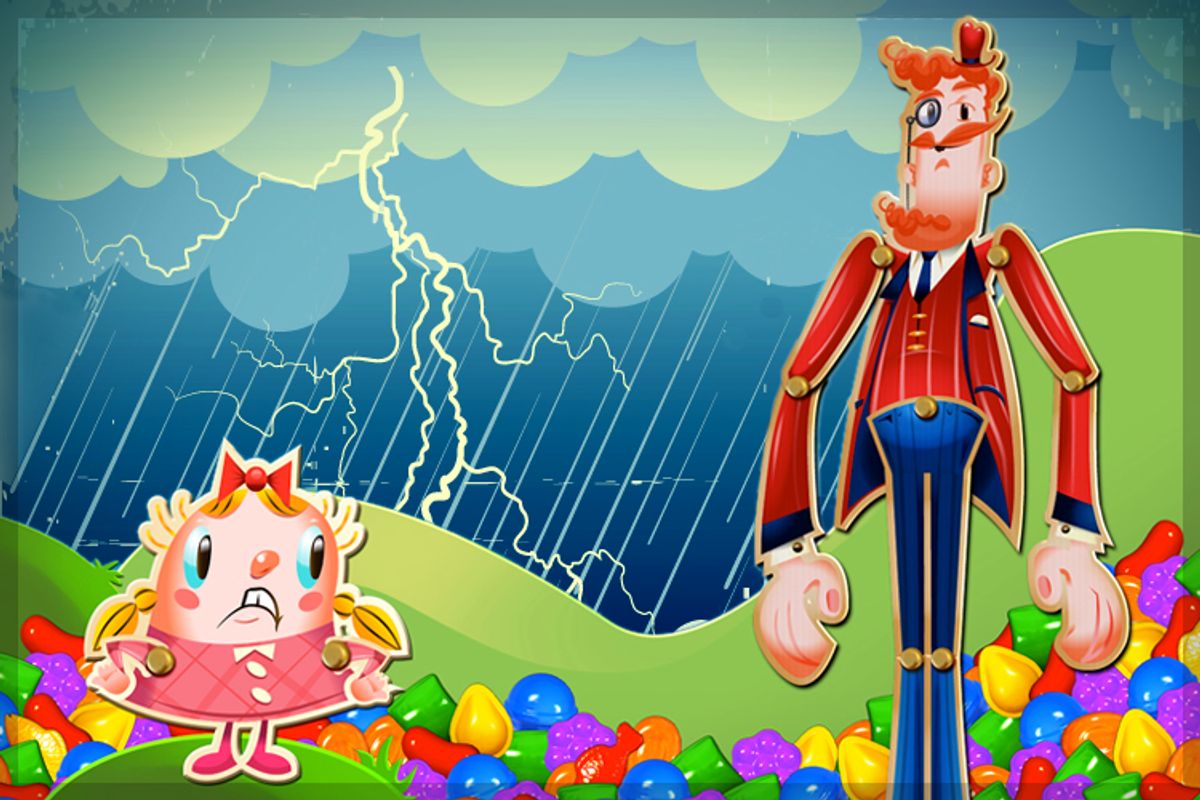 Anyone who has played the game "Candy Crush Saga" for more than a few minutes has probably, at least on a subconscious level, grappled with the bankrupt soul of modern video-game capitalism. In the so-called free-to-play world, it's hard to think of another game developer that has more successfully mastered the marketing coup that merges addictive game play with powerful incentives to regularly fork over cold, hard cash.

What?! I have to wait 21 more minutes before I have access to those new lives that will allow me to keep playing? You've gotta be kidding me! Oh, but I can purchase another "sweet set of lives" for a mere 99 cents?  Sign me up! Please sir, bleed me some more.

The game itself isn't innovative in the least. But the business model is genius. And there is absolutely no question that it works. The No. 1 iTunes download for 2013, "Candy Crush" is reportedly clearing $1 million in profit every single day.

So yeah, you don't have to play a game like "Candy Crush Saga" very long before you start feeling bleak about how we'll spend our leisure time in the age of late capitalism, nitpicked to death by 99 cent fees. And that's even without having heard the news that King.com, the developer of "Candy Crush Saga," is seeking trademark protection for the words "candy" and "saga."

It's true: On Jan. 15, the U.S. Trademark Office gave King.com, "Candy Crush Saga's" developer, preliminary approval; protection for the word "candy" in the titles of video games and affiliated merchandise, including clothing.

On Tuesday, word began to spread that game developers were being asked to remove their Candy-named apps from the iTunes Store. Incredulity spread fast on Twitter, as it always does when a particularly egregious example of trademark overreach boils over. Most of the ire centered on the seeming absurdity of a business entity attempting to gain ownership of a word as commonly used as "candy" --  two syllables that trace their etymological ancestry all the way back to Sanskrit!

But there are deeper reasons to be annoyed by King.com's trademark-grab than just the specific question of whether  a word like "candy" can be legitimately pulled into the private domain. King.com's aggressive move is just one symptom of a deeper sickness permeating our entire structure of intellectual property laws, including not just trademarks, but also copyright and patents. We endanger our prospects for future prosperity when we clamp down too hard on the free expression of ideas. "Candy Crush Saga's" candy is at one end of a spectrum that, at its most extreme, includes the formation and capitalization of corporations whose sole purpose is to amass intellectual property so as to be able to sue other corporate entities for infringement. This is how an economy's arteries start to harden, how growth becomes stillborn.

Now before anyone starts screaming about how intellectual property laws provide the necessary incentives for free market entrepreneurs to create great products that will improve all our lives in unimaginable ways -- or how every unauthorized copy of anything is property theft punishable by hanging -- let's make one the thing clear: The case for not going overboard on trademark or copyright or patent protection is not an absolutist information-wants-to-be-free argument.

Instead, it's an argument about where to draw the line and how to strike the proper balance between what's good for society and what's good for individual (or corporate) creators. It's an argument concerned with technical questions about the optimal length for which a patent can be held; or how long copyright protection should last before a work enters the public domain; or how expansive a given trademark grant should be.

Most of all, it's an argument based on taking advantage of the particular properties of "knowledge" -- the wondrous fact that ideas are easy to copy and share and combine into new things. If we want to make the most out of this incredible boon, if we want to live in a society that is constantly innovating and growing at the most robust pace possible, then our intellectual property laws should take advantage of these special properties rather than try to constrain them. Because if everything gets locked up tight, we'll grind to a halt.

This argument is most frequently associated with the economist Paul Romer, whose "new growth theory" made a compelling case that societies that figure out how to fully exploit the unique qualities of knowledge have a better shot at sustained prosperity. The same property rights that apply to physical goods do not and should not apply to intellectual goods. In a terrific interview with the libertarian economist Russ Roberts, Romer offered a compelling example of the worst-case scenario:

Imagine if we'd given an infinite life property right to the person who came up with A-minor, and nobody could play an A-minor chord for the rest of human history without negotiating a contract with the great-great-grandchildren of whoever it was who came up with A minor.

And so we'll ultimately have to be in a position which is somewhere the middle — where you can control something for a while and you can control it for sale to consumers, but you can't stop somebody from coming along and coming up with an even better version down the road.

In December, the House of Representatives passed the "Innovation Act" -- a first stab at reining in the business models of outfits like Intellectual Ventures. It's become widely recognized that the cost of litigating patent infringement cases is slowing down innovation throughout the technology sector.

Congress has historically seemed less interested in reforming copyright and trademark law than making sense of the patent mess. But you can draw a direct line connecting the trademark stance of game developers like King.com to the barely  disguised extortion practiced by Intellectual Ventures. At all levels of the economy, too much friction in the system -- too many lawyers waving too many cease-and-desist letters -- means that we end up getting nowhere. Loosen the reins, and we start to gallop. Not only can't we stop the new ideas from coming along, but we should be actively encouraging new ideas to bloom.