Karl Rove's "behemoth" targeted: How his plan to skirt the law could backfire

So far, Rove has evaded punishment for violating campaign finance laws -- but a new lawsuit may change all that 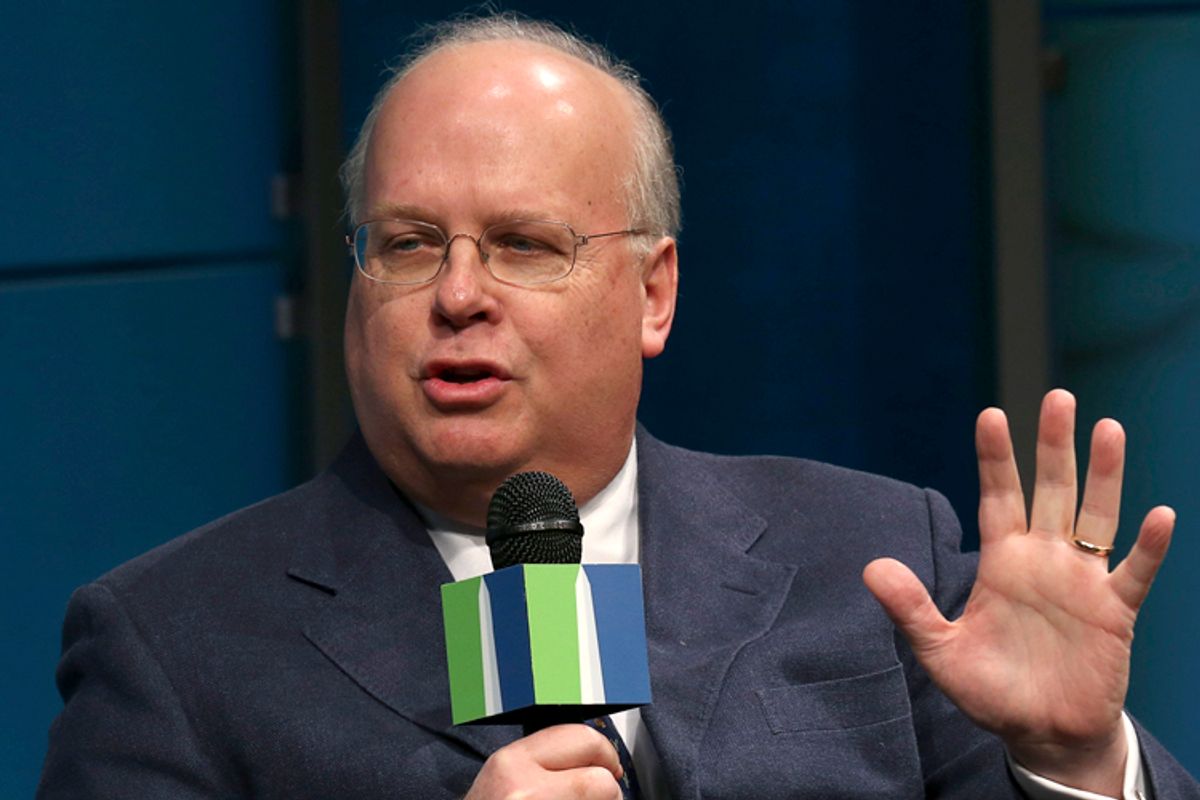 A number of unhappy "good government" groups will file a lawsuit against the Federal Election Commission next month, in hopes that the courts will force the FEC to enforce the federal campaign finance laws that the FEC is, supposedly, there to enforce.

The organizations are particularly unhappy that Karl Rove's Crossroads GPS "behemoth" outfit, which has raised hundreds of millions over the last several years to elect Republican candidates to office, recently received a pass from the FEC, even after the agency's Office of General Counsel found reason to believe Rove's group clearly violated campaign finance laws.

The news about the groups' intention to file suit was offered on the KPFK/Pacifica Radio "BradCast" this week by my guest, Craig Holman, the government affairs lobbyist for Public Citizen's Congress Watch.

Public Citizen, along with the Campaign Legal Center, Center for Media and Democracy and Protect Our Elections, filed the initial complaint over campaign spending in 2010 by Rove's then new nonprofit 501(c)(4) organization. They now plan to sue the FEC for failing to do its job, Holman explained on the show on Wednesday. [Disclosure: Protect Our Elections is a campaign created by VelvetRevolution.us, an organization co-founded by The BRAD BLOG, though we weren't personally involved with either the complaint or the upcoming suit.]

Holman detailed how 3-3 deadlock votes on whether to pursue further action in most of the campaign finance rulings by the three Democratic and three Republican commissioners on the FEC has increased "ninefold" since 2008. A deadlock vote effectively ends the matter, even if wrongdoing had been found by the investigative staff, as is the case here.

In the original complaint against Rove's Crossroads GPS, the FEC's Office of General Counsel found that the group had spent a majority of its funding on campaigning in 2010. If so, that's a violation of the law, since Rove's group should have filed with the FEC as a political committee, rather than as a 501(c)(4), which is supposed to be a non-electioneering "social welfare" organization. As a political committee, funders would have to be immediately disclosed, but as a (c)(4), the identity of those funding Rove's organization can remain a secret.

This is the "dark money" in elections that exploded after the Supreme Court's infamous 2010 Citizens United ruling, and this duplicity is precisely what the majority on the court said could not happen, thanks to enforcement of existing campaign finance law by the FEC. That would be the same FEC that no longer seems able to enforce any law.

"Crossroads is the behemoth of electioneering nonprofit groups, and the general counsel and the staff completely agreed with us," Holman told me. "It's a hands-down call. This is a political committee. Their major purpose is electing Republicans to Congress ... or trying to defeat the election of Obama at the time as well."

The tortured reasoning that the Republican commissioners offered for voting against pursuing further investigation of Rove's group, despite the findings of the OGC, was at the heart of my discussion with Holman. (For the record, here are the statements issued by the Democratic commissioners [PDF] and by the Republican commissioners [PDF] after the tie vote succeeded in quashing the entire matter.) And, of course, this abuse of the taxpayer-funded 501(c)(4) system is precisely what was at the heart of the phony IRS "scandal" last year.

In short, citing the 2002 McCain-Feingold campaign finance reform law, Holman explained: "We have a clear definition of federal election activity and the Republican commissioners just decided not to use that definition. Instead, they created their own definition."

The FEC "is broken," he said. "So we need the courts to step in and start evaluating the merits of some of these cases, particularly the Crossroads GPS case." That's what Holman and the other groups now intend to do.

Friedman's complete interview with Holman can be heard here...