Pathetic: Congress is expected to do even less in 2014 than in 2013 when the government shut down for weeks 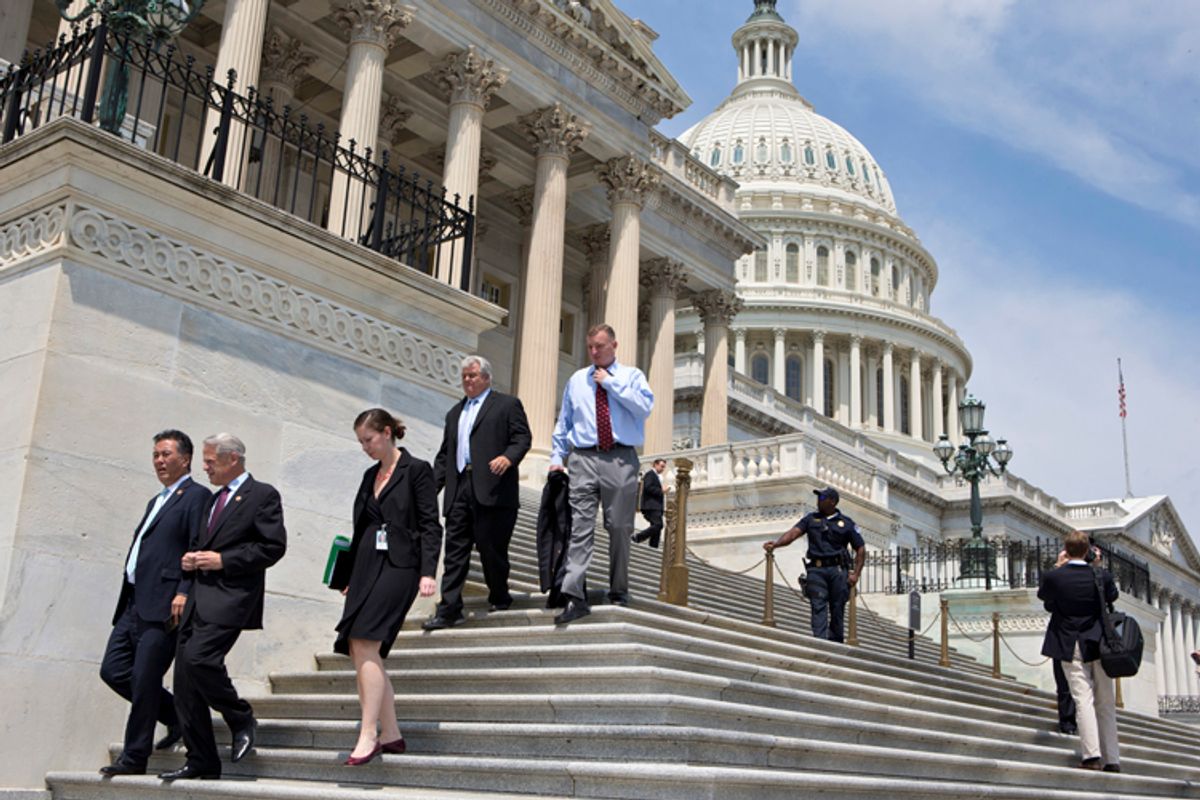 Don't be fooled by the recent lovefest on Capitol Hill.

US lawmakers may have come together to pass bipartisan budget and spending bills in recent weeks, but this year's Congress is actually expected to be even less productive than last year's.

(In 2013, Congress passed the fewest bills since the institution began counting in the 1940s.)

When you run down the list of this year's major issues, the cause for pessimism is clear:

Senate Democrats were able to pass comprehensive immigration reform with the help of Republicans last year, establishing a 13-year pathway to citizenship for millions of undocumented immigrants in America.

But the measure remains stuck in the GOP-controlled House.

And while Republicans do plan to release a set of principles on the issue sometime this year, don't expect it to include any concrete proposal, according to the National Journal.

This issue has been dead in the water for months now, and it's unlikely to be resurrected with any success in 2014.

Public support for stricter gun laws has dipped from 57 percent to 49 percent since the immediate aftermath of the Newtown massacre in December 2012, according to a recent CBS News poll.

Congress isn't likely to act on an issue that remains low on the public agenda during an election year.

The best chance for any real action on gun reform was a bipartisan compromise to strengthen background checks, but it failed in the Democrat-controlled Senate last April.

Buoyed by worker protests across the country, Democrats plan to push for an increase in the federal minimum wage this year.

But don't expect it to get anywhere.

Most Republicans are expected to oppose any such legislation, claiming it would hurt job creation by increasing costs for business owners.

Even some moderate Democrats don't love the idea, and have declined to comment on whether they would support such a plan.

More from GlobalPost: The US can learn something about minimum wage from the rest of the world

Efforts to reach a bipartisan deal on this hot-button issue collapsed in the Senate last week, effectively ending (at least for now) a push by Democrats to revive long-term unemployment benefits.

The program, created during the height of the Great Recession, expired on Dec. 28.

The expiration cut off a key economic lifeline for millions of Americans. And while Democrats hope to continue negotiations, the Senate probably won't debate the issue again until after it returns from recess in late January.

GOP members of the House have made it clear they have little appetite for the issue unless Democrats come up with a better way to pay for the benefits.

This might be the lone bright spot for Congress in 2014.

There's a good chance lawmakers will be able to cut a deal soon on the long-delayed piece of legislation impacting agriculture policy and food stamps.

Historically, the bill has been an easy sell. But the last five-year extension was passed in 2008, and no legislatoin is in place currently.

Negotiators have reportedly agreed to $8 billion in food stamp cuts over the next decade.However, disagreement over dairy support prices and a controversial amendment banning states from imposing agricultural standards could still sink the measure.

As one Senate leadership aide told Time magazine, “In this environment, I don’t think anything is a safe bet.”