The 18 best songs about the devil

These catchy tunes make the case for the dark side 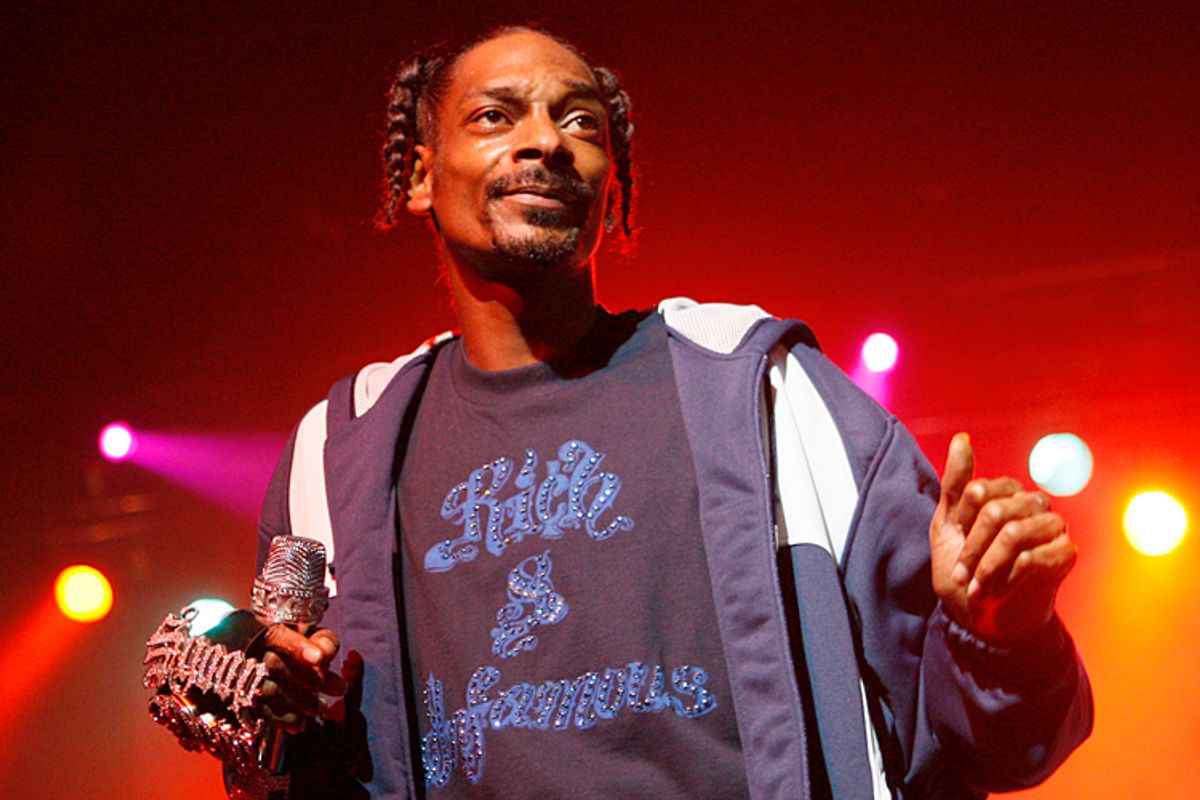 It's often said that the Devil has the best tunes. That may or may not be the case, but it's certainly true that pound for pound there are way more songs about God than about his adversary. Still, Satan has inspired a legion of melodies. To do this as it should be done, I should probably list 666 of them, but even my patience doesn't extend that far (to say nothing of my editor's).  So the number of the beast in this case is 18, unless you want to list another 648 in comments.

Hildegard von Bingen has been subjected to some unfortunate New Age renditions, but this is a pleasingly low-fi setting for voice, cello and recorder.  There are three songs here; the middle one is "Sed Diabolus," or "Only the Devil Laughed." It's part of a cycle dedicated to St. Ursula, who was slaughtered along with thousands of accompanying virgins after making a pilgrimage to Rome. "Sed Diabolus" is thought to be the conclusion, in which the devil, "who would leave no work of God intact and undiminished," sneers and jibes at Ursula. It seems a bit odd that a saint like Hildegard would let Satan get the last word, but perhaps she was feeling especially pessimistic that day. It can happen to the best of us.

There's a long bluegrass gospel tradition of warning listeners off Satan. The most famous example is probably the Louvin Brothers' "Satan Is Real," but this 1993 track from the Seldom Scene is also a worthy entry in the genre.  The singing doesn't sound exactly demonic, though I suppose the devil could conceivably be taken with the affectless chill of bluegrass harmonies.

Dour country singers wail about the devil all the time, but Old Nick is noticeably absent from the African-American gospel tradition. This Alex Bradford track from (I believe) the early '50s bucks the trend, even if the group here musters more confidence about beating the devil than the Seldom Scene manage. Certainly no one whose soul was damned could manage the hearty "oooooh" that Bradford lets rip around the :50-second mark (and if you think Bradford recalls Little Richard there, it's because they're both imitating the great Marion Williams).

George Jones, "Take the Devil out of Me"

This is one of Jones' early career Mercury tracks from the mid-to-late '50s, straddling the line between rockabilly and honky-tonk. Jones' hiccupping yodel here gives you the impression the devil and Jesus are in fact wrestling in his larynx -- a glottal struggle over that demon drink, perhaps.

A blind gospel performer from Liberia, IJenNeh offers a casually chipper challenge to the forces of darkness in "Satan Fall Down." There's none of the warbling uncertainty you get in George Jones' performance here. Instead the dancers boogie and shake with blithe enthusiasm, as if every step is squishing an adversary underfoot.

The devil in this song wishes that some mild trampling was the worst he had to suffer. You can read "Old Lady & the Devil" as cheerful misogyny or cheerful empowerment, but either way, the old lady in question gets to go to hell, murder various devils and then bash her husband for trying to get rid of her in the first place. To this day, no doubt, the devil fears those terrifying syllables, "Faaa-dita-la-dita-la-Faaa-dita-la-dita-la-daaay." (If you listen carefully you can hear the priest repeat them in "The Exorcist." No fooling.)

Robert Johnson, "Me and the Devil Blues"

One of several Johnson tunes about dealing with the devil.  This one seems almost like a reply to the Bill and Belle Reed track; instead of the old lady beating the devil, the devil helps him beat his woman. Not especially enlightened, but the guy does die, so perhaps that's retribution of a sort. Johnson is generally celebrated for his guitar work, but his singing is perhaps just as striking, shooting up into falsetto moans, part spooky, part celebratory, part mimicking the squeal of that Greyhound bus that incongruously gets his soul at the end.

Rex Allen, "Tying a Knot in the Devil's Tail"

One of the more popular musical cowboys in the Roy Rogers mold, Allen subjects Satan to a series of cruel indignities, as fruity cowboys bearing accordions, of all things, rope and tie the poor bugger. As Allen says, the "gut line is coiled up neat," the violent humiliation (including branding) delivered with a tidy, forthright, avuncular aplomb. Don't trifle with cowboys, Satan, especially if they're drunk and singing.

Lyle Lovett, "Friend of the Devil"

I've always had an ambivalent relationship with the Grateful Dead's "Friend of the Devil" — the hook is great but the delivery is so thin, watery and half-assed it takes much of the pleasure out of it. Lyle Lovett's cover is a relief. With the cello and the vocals vying to see who can slow down most, Lovett comes across as world-weary enough to be a passing acquaintance of the evil one. (Surely if they were close friends, Satan would have talked to him about that hair.)

The Fall, "Lucifer Over Lancashire"

"He took over everywhere/And this place/Now over here/And it's time he move on/His cock-eyed moon/And useless prayers." The devil goes to Lancashire and inevitably becomes jangly, hip and somewhat obscure. Post-punk is too cool for devil worship; any witch who listens to the Fall just ends up as a rock critic.

A little known Canadian psych rock band with an optimistic message about how everybody can be what they want to be with the help of Satan. The music hovers appropriately between surging up-with-people empowerment and a more ominous drone. The singer has clearly listened to a lot of Mick Jagger, but I much prefer this to the bloated, overplayed "Sympathy for the Devil." Satan as uplift is a lot weirder, and a lot more enjoyable, than burbling profundities about who killed the Kennedys.

Snoop Dogg, "Murder Was the Case"

There are many great Deicide songs about Lucifer, but this track from 1992's "Legion" is still the undisputed dark lord.  The riffs are such thick, cancerous clots the whole thing turns into a giant abyss of percussion, like you're being whipped with that Caco-Daemon's flails. Glenn Benton utters guttural blasphemous shrieks from the bottom of a storm drain and the Hoffman brothers let loose with guitar solos that are eaten by the brutal murk.  High on Fire and any other metal pretenders should be sentenced to listen to this song over and over and over in hell until they stop sucking and learn how to do it right.

Not one of the best-known old school Scandinavian black metal bands, but one of the best. Necromorbus gets that black-metal feeling of spacious, overwhelming evil without drifting into soothing folk or ambience.  "The Devil's Emissary" from the 1998 EP "Devilry" has a processional lurking somewhere in the background, sped up and crushed under the racing drums, a church service turned into meaningless, repetitive writhing.

A track from back when metal was heavy metal, this is from Danish band Mercyful Fate's 1983 classic "Melissa." Cheesy laughter; a call and response between some high-voiced soul screaming and the deeper demons coming; operatic warnings; and brontosaurus-stunning Sabbath proto-doom riffs, all wrapped in 11 minutes of theatrical Halloween prog. The title may make you think that we're on the side of the angels here, but as the lyrics explain, "Is it Satan's fall? No, it's Satan's call." Glad we cleared that up.

Sylvester Anfang, "The Devil Always Shits in the Same Grave"

I thought about including some satanic doom to go with the satanic death, but decided instead to go with this 2009 not-quite-doom, psych slab of uncategorizable weirdness by Belgian funeral folk band/collective/coven Sylvester Anfang (sometimes spelled "Silvester" because with enough weed minor details like how to spell your own name start to seem unimportant). One part krautrock,, one part folk evil, and you end up with a Tom Waits-meets-cosmos ode to infernal scatology.

Electronic music pioneer Ruth White with a semi-ambient, gargled tribute to the forces of darkness. The track goes on and on with no groove or form, just babble and bleep, church-service boring with deranged phrases clumping around aimlessly like thoughts in a disordered brain. It does suggest, to no one's real surprise, that Satan is fond of computers. And possibly moogs.

Lizst's famously fiendish composition, in a 1945 performance by the 22-year-old William Kapell. It seems like even Satan would get seasick if he actually tried to waltz to this. Maybe, à la Charlie Daniels, he was in fact driven from the ballroom by Kapell's virtuosity.