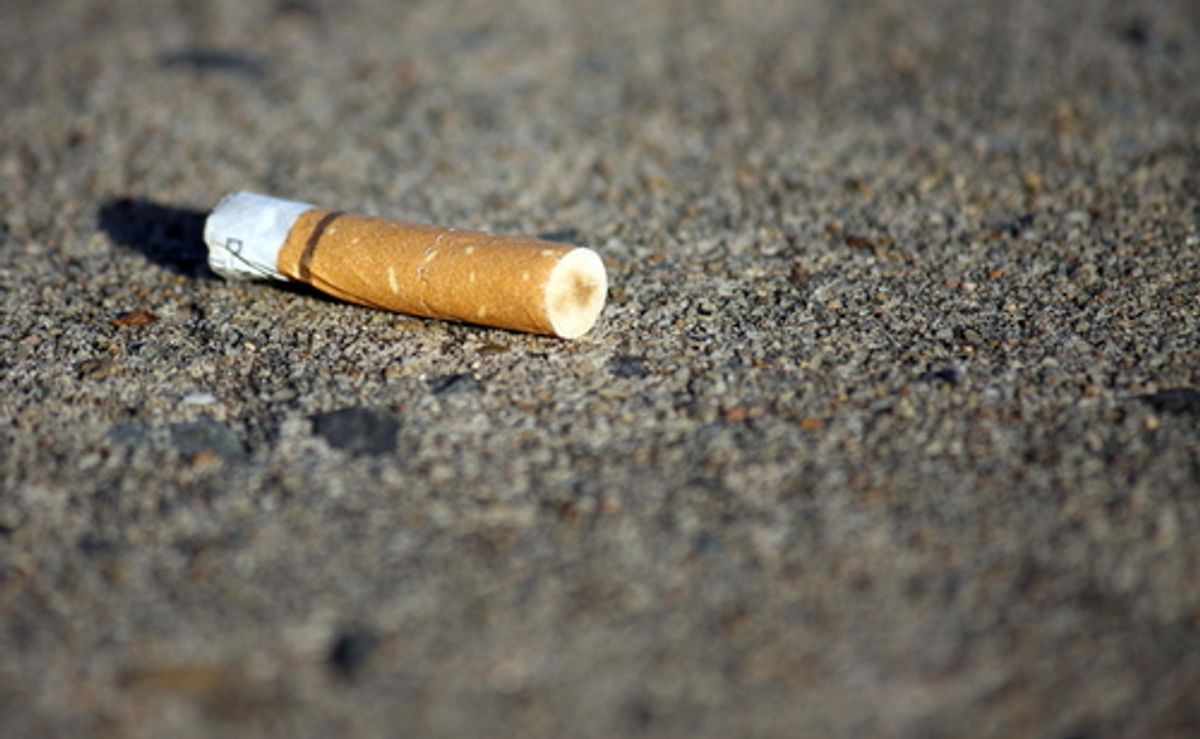 Citing dangers posed to "children, wildlife and the environment," a California assemblyman has introduced a bill targeting not cigarettes, but their filters. Discarded filtered cigarette butts, says Mark Stone, are "the single largest item on beaches, waterways, gutters and storm drains," costing the state $41 million annually in clean-up costs. The bill, if passed, would make it illegal to sell or give away filtered cigarettes -- and impose a $500 fine on anyone who tried.

"Cigarette filters leach dangerous chemicals into the environment, kill animals that eat them, and cause communities to spend millions of taxpayer dollars for clean-up," Stone said in a statement last week. "California has many laws in place to curtail cigarette litter, but people continue to illegally discard tons of cigarette butts each year. The current laws aren't sufficient to address this major problem."

Because Stone's proposal has nothing to do with public health (aside from the health risk that discarded butts pose to children), smokers would still be free to puff away at filterless or electronic cigarettes, or to carry around a reusable filter. It's also worth pointing out that filtered cigarettes aren't any safer than their unfiltered counterparts, although people who smoke them may mistakenly believe this to be the case. The environmental risks, on the other hand, are significant. More from KCET on that:

Most commonly available cigarette filters are mainly made of fibers of the plastic cellulose acetate, which can take more than a decade to fall apart on exposure to the elements. Though cellulose acetate is a relatively benign material, smokers coat the filters' fibers with toxic tar and nicotine compounds by the act of smoking. Nicotine in discarded filters is known to pose a serious risk to small children. More than 13,000 calls to poison control centers from 2006 through 2008 involved kids eating cigarette butts, and other studies show that it's kids a year old or less that are at the most risk.

Even without the risk of toxicity from nicotine, the non-biodegradable filter components can accumulate in the stomachs of animals that ingest them, with malnutrition and starvation often resulting.