No, the new Mitt Romney documentary doesn't "pull back the curtain"

"Mitt" is a revealing political campaign documentary -- as long as politics, strategy and policy don't count 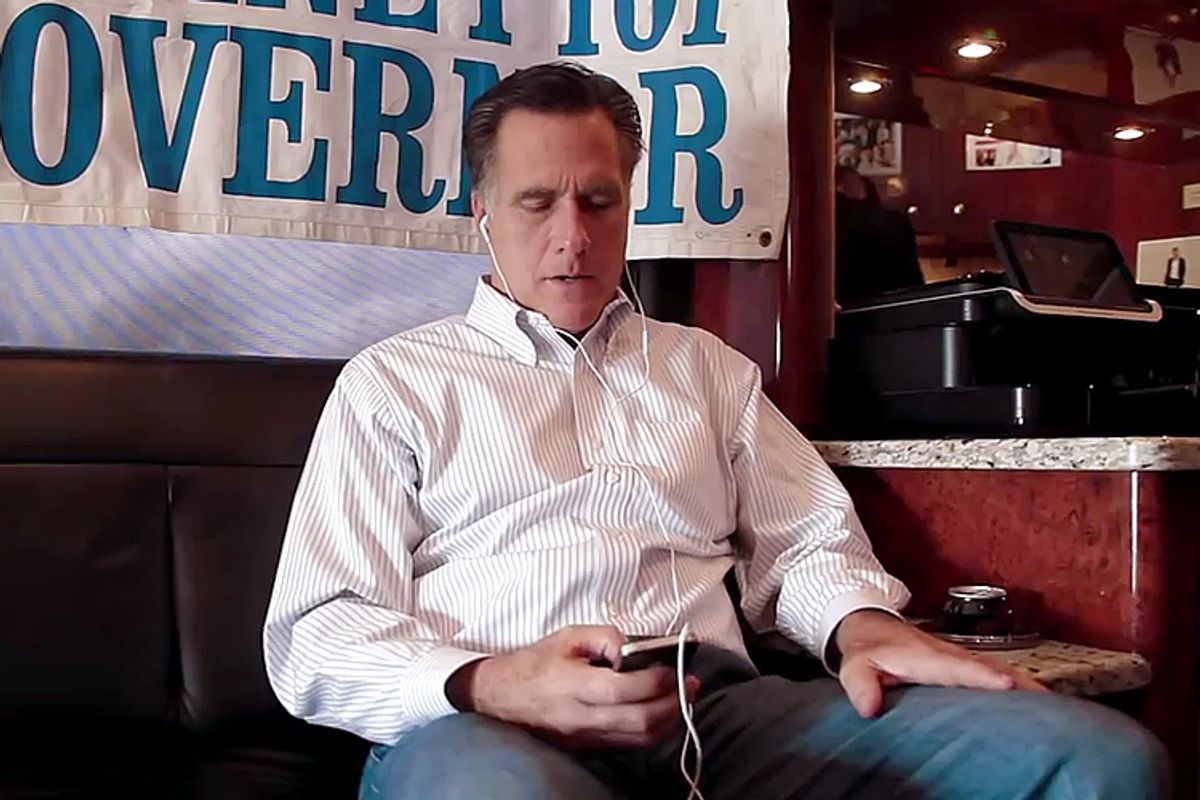 Mitt Romney, in the documentary "Mitt."
--

Mitt Romney is a kindly gentleman who has a family he loves very much. Also, he was not very happy when he lost the election, he had some nerves before his presidential debates, his hair sometimes gets messed up, and he lives in a very big house. These are the kinds of things we learned during the new Netflix documentary "Mitt."

These tidbits may not be as insignificant as I'm blithely making them seem: it's fun and revealing to see our potential presidents' "human" side, I guess. And Romney comes off well. But here's what we didn't learn: pretty much everything else about the politician and his campaign.

Sure, we do hear that Romney has to deal with people calling him a flip-flopper, but we don't see any of the process he underwent in actually changing his positions on these key issues -- from reproductive rights to LGBT rights. No strategy sessions, no visits to the people who purportedly "convinced" him to alter these views. No explanation of how he got into the position in the first place. It's as if it didn't happen.

That's fine. Greg Whiteley, the documentarian, is obviously free to include what he wants (or has access to). But to say this is an "in depth" look at Romney that "pulls back the curtain" means overlooking some pretty big holes, because this is as superficial an inside account of a political campaign as you'll find. (As Whiteley himself admitted, "If you’re looking for a film like the War Room [the documentary on Bill Clinton's 1992 presidential campaign], this film is not that. My access was the opposite. I didn’t get access to people like [campaign manager] Stuart Stevens and the campaign staff. But I did have access to the family, so that’s what the movie became.”)

As David Corn of Mother Jones notes, not without some self-interest, we only see a quick snippet of the infamous "47 percent" comments, and nothing about when else he said it, why he felt this way about the country, his own reckoning of what this suggests about his fellow Americans (to say nothing of how he dealt with the political fallout of the comment's release). Remember that time Romney said he liked firing people, or that other time he said he wasn't concerned about the very poor? He may well have been taken out of context and meant something far more benign. But viewers of this film won't know because, like the process of choosing Paul Ryan as Romney's running-mate, these political moments aren't even mentioned.

You might wonder how Romney and his team felt about his top aide comparing the campaign to an Etch-a-Sketch, telling reporters he would start all over in the general election campaign and effectively reinvent his message. Or, more substantively, how he felt about laying off droves of workers during his time as a buyout capitalist; one could imagine some deep introspection about such human-vs.-business decisions. But these major items of discussion simply never took place in the campaign depicted in "Mitt." (No wonder the title character comes off so well!)

The way Whiteley lures us in and makes us feel like we're getting an inside look at the candidate is by showing us footage of the Romney family from a few big days during the campaign; seeing the candidate (who comes across as a doting grandfather and nervous debater) in these private family moments provides a certain voyeuristic satisfaction. But you won't see the almost-president grapple with major political decisions, reckon with substantive policy implications, or reveal his motivations.

Maybe the most glaring omission from the documentary is any acknowledgement of Romney's campaign itself -- the staff, the volunteers, the high-priced strategists, consultants. Truth be told, these are the people who do much of the work, make many of the decisions, advise the candidate, decide the schedule, create the messaging, etc. In "Mitt"'s world, the campaign is some old-fashioned fantasy version in which a man and his family travel the country together, like a modern-day political Partridge Family, making decisions for themselves in a cocoon divorced from political considerations.

This is a nice image. It's just not real.