What Obama should say in the SOTU, but probably won't: Stop the wage slavery!

The president has the power to shape the way the country thinks... if only he'd use it 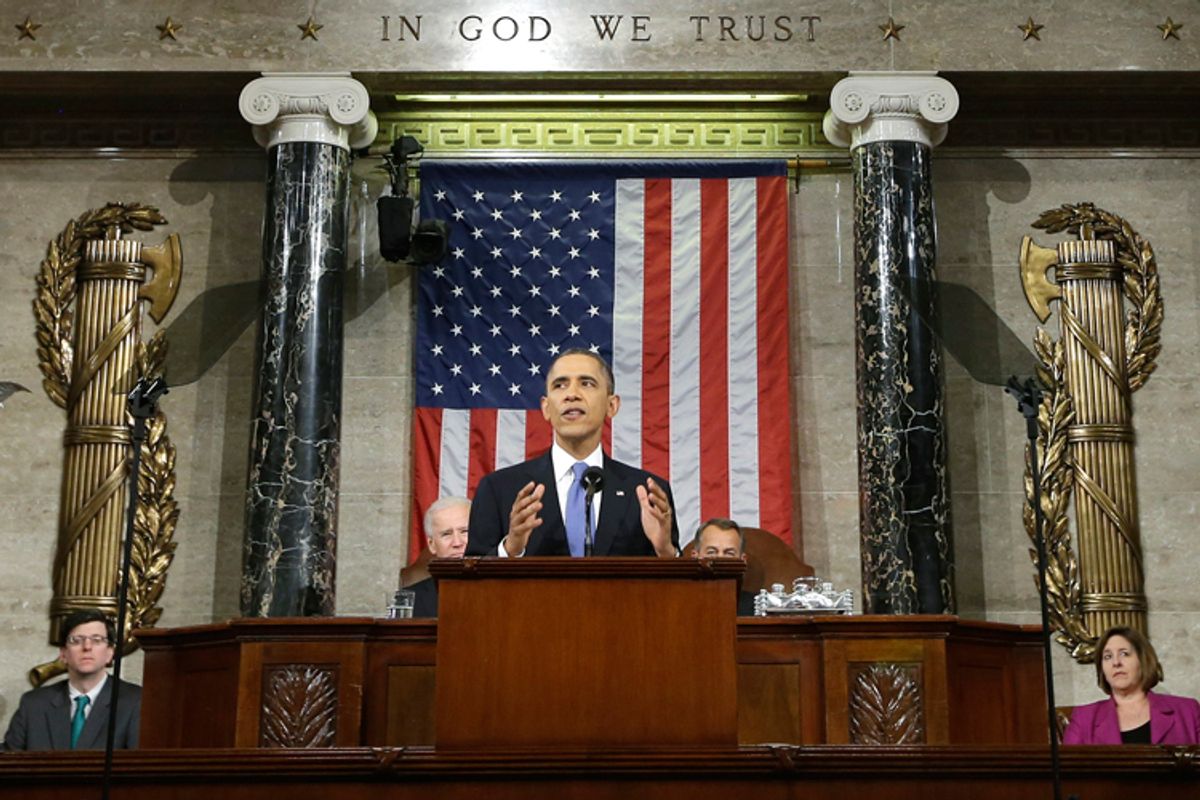 There are enough people guessing what the president will do. This is about what he almost certainly won’t do, but what I would like him to do.

The president has material power without the Congress, and personally, I would like to see him use it. He could issue an executive order for the government to grant contracts only to companies that pay their workers above some higher minimum wage. Or he could reject the XL pipeline on two national security grounds: its contribution to global warming and the dangers of leaks, explosions; and he could stop the virtual pipeline of dangerous tar sands and fracked oil shipments by train and waterway by insisting immediately on safe puncture-proof tanks. He could direct federal agencies to monitor and control dangerous chemical use and storage to prevent future versions the Great West Virginia Water Disaster. I would love to see him act in dozens, if not hundreds, of areas for the public good, and give the moral grounds in the SOTU.

Beyond material power, the president has even greater power — cognitive power — and he hasn’t used it much. Cognitive power is the power to put important ideas in people’s minds by shaping public discourse. He has the unique power to change how America thinks simply by discussing crucial ideas over and over.

American democracy is based on empathy — citizens caring about other citizens and working through their government to provide public resources for all, making both decent lives and flourishing markets possible. He used to speak of empathy as “the most important thing my mother taught me.” But he was misinterpreted by conservatives and dropped this most central idea. He started talking, as Elisabeth Warren has so eloquently, about the crucial nature of public resources, but he messed up once (“You didn’t build it”) and stopped. He needs to take up that theme, get it right, and repeat it in every speech.

We know he’s going to talk about economic inequality, as he should. He will probably mention worker salaries, which haven’t risen in 30 years. But he needs to state a simple truth: Workers are Profit Creators! Corporate “productivity” — the profit-per-worker — has risen, but the profit creators haven’t been getting a fair share of the profits.

One of the reasons for low salaries is that out of work workers can’t bargain for fair wages as individuals. The absence, or weakening, of unions leads to Wage Slavery: take what you are offered or someone else will. The president needs to talk about Wage Slavery and how unions offer freedomfrom wage slavery. This is a crucial idea missing from public discourse, especially in states where conservatives are trying to legislate wage slavery via so-called “Right to work laws,” which are actually exploitation laws. The president should be talking regularly about how unions contribute to freedom — and getting the unions themselves to talk about it. If the idea isn’t mentioned, it won’t enter the public mind.

Next, pensions. Pensions are delayed payments for work already done. Say it, Mr. President. When pensions are cut, the wages already earned by workers are being stolen. Pension funds are often taken by companies and local governments and spent on other things. That is theft. There needs to be transparency — public reporting yearly — on what is being done with pension funds. The president could issue and executive order that any company, state, or municipality receiving money from the government must adopt the transparency principle for pension funds.

The president has occasionally used the idea of investment where conservatives talk of “spending.” Drop “spending,” Mr. President. When you spend money, as when you buy a product, the money is gone. But when you invest, the money is still there. Paying for early childhood education is a wise major investment in the brains of our children. Remember that by the time a child is five or six years old, half of his or her neural connections have died off — the half least used. A child’s brain is shaped and developed in those important pre-K years. Funding serious pre-K is one of the most important investmentsout country could make. The investment isn’t gone. It is there inthe child. Talk about brain shaping during pre-K, Mr. President. Every one in the country should know about it.

Perhaps the most important cognitive power of the president concerns the global extreme climate crisis. There are important ideas that need to be in public discourse. First, nature is inside of us, not just outside, as the world “environment” suggests. We breathe air, drink water, and eat food. Pollutants and pesticides are in us, not somewhere else. They cause cancer and other illnesses. In a drought, as in California right now, you need water, clean water, to drink and raise food. IN a major hurricane, water is can be deadly and devastating. Nature is in and around us, and supports all life. Don’t destroy it, poison it, or turn it into a destroyer.

Coal, oil, and natural gas are immoral fuels, dirty fuels. Say it. Our planet, the only one we have — nature itself — is being sacrificed for short-term private profit. Yet, our government is negotiating a trade agreement that could outlaw all environmental laws, since it lets foreign nations sue when state or local environmental laws cut the corporate profits of foreign-owned corporations. It would be devastating to democracy, politically, since it gives up the sovereignty of our own people over their own lives. Don’t give in and repeatedly tell us why you are you won’t fast-track that treaty.

Species Are Us! We are part of the continuum of life with all species. Bees matter. Don’t let them die off. Songbirds matter. Frogs matter. Salmon matter.

Invite to the SOTU ten prominent pro-football players who have gotten lifelong brain damage from concussions received in football. Have them stand up in the balcony.

Finally, read labels our loud, Mr. President. Harmful chemicals are not just stored near West Virginia rivers. They are in our food, our cosmetics, and our toiletries. Use the Good Guide App in your SOTU and have Dara O’Rourke stand up and take a bow for inventing it. Introduce to the American people the idea of ENDOCRINE DISRUPTORS, chemicals that affect hormones. Read the Environmental Working Groups list of the dirty dozen, the twelve most dangerous, and tell everyone where they show up in your refrigerator, larder and medicine cabinet. Make sure Endocrine Disruptors are labeled as such, with a brief note pointing out that they affect hormones. Contribute to the health of our military and their families by an executive order keeping major endocrine disruptors off the shelves of PX’s and military hospitals. The cognitive and material powers can sometimes work hand-in-hand.

Cognitive powers may seem small, but used over time they can have major effects.