Goodbye to Ann Perkins: Can "Parks and Recreation" still end on a high note?

Her final season seems symptomatic of a show on the decline. Can it turn things around? 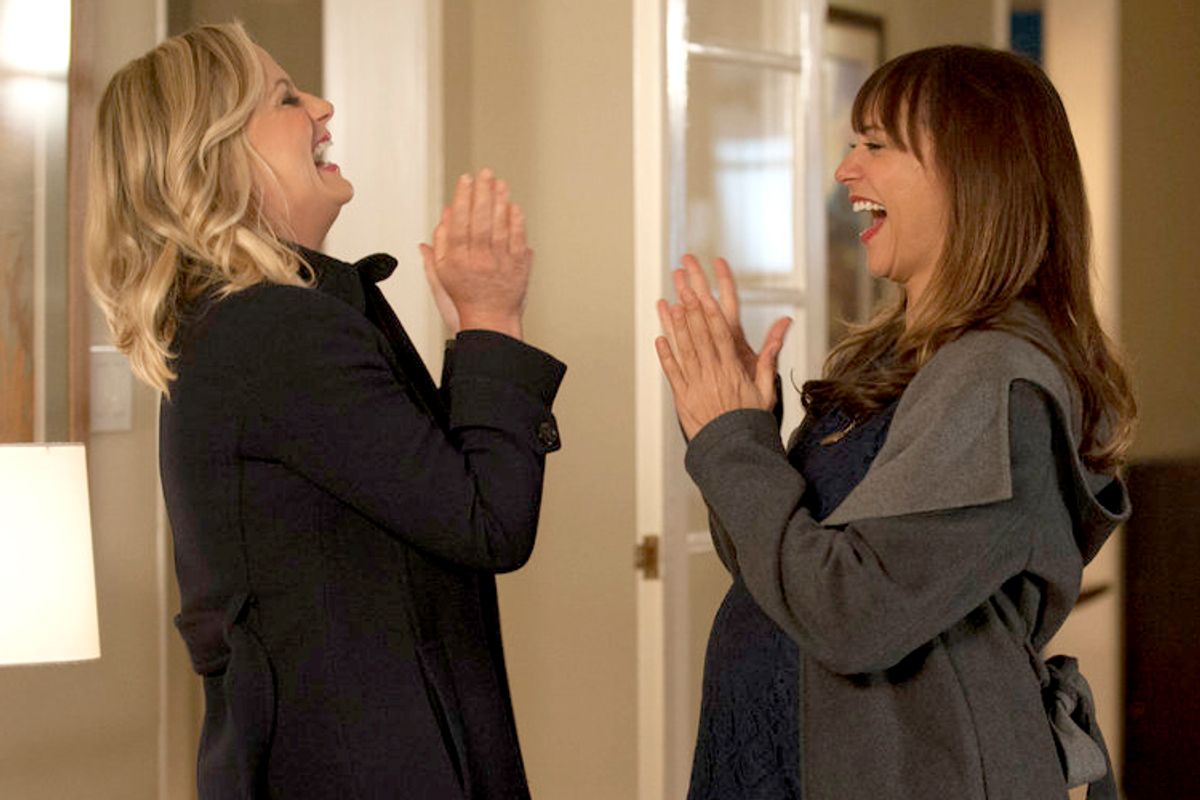 A friend of mine from college received some pretty good news recently. NBC is making the pilot for a sitcom he wrote. It revolves around the romantic goings-on at the offices of an online dating service. The sitcom comes courtesy of Rashida Jones' company and will likely feature the actress in a prominent role. It was announced months ago that Jones would be leaving the cast of "Parks and Recreation" this year along with her costar Rob Lowe. The announcement of her new project for the network preceded her departure by less than a month. Jones' final episode of "Parks and Recreation" airs tomorrow night.

It's no shocker that love will be in the air at Jones' next stop. Her "Parks and Rec" character, Ann Perkins, was the object of many a man's affections during her time in Pawnee. But it was a choppy journey toward finally meeting and spawning with Rob Lowe's excitable and exceedingly healthy Chris Traeger. Perkins started out as the beleaguered girlfriend of Chris Pratt's couch-bound oaf, Andy Dwyer. (As funny as Pratt was from the outset, I dare say Aubrey Plaza's April Ludgate later locked him down in his best years.)

Only longtime viewers of the show will remember that Perkins' second love interest, the wonderfully named Mark Brendanawicz (Paul Schneider) with whom she had absolutely no visible chemistry, was eventually written off in the second season.  After that, Perkins went through a fairly weird period during which her most significant intimate relationship can be said to have been with her collaborator turned colleague and BFF Leslie Knope (Amy Poehler).

For a time, she even dated Tom Haverford. Pairing Ann Perkins with Aziz Ansari's admittedly funny but disturbingly shallow -- not to mention increasingly one-note -- wannabe baller seemed a sure sign the show runners were running out of compelling options for the character. Even the married, much-ridiculed Jerry Gergich (Jim O'Heir) shows more promise than Haverford as a potential mate.

Wisely, Perkins was reunited with Traeger, with whom she'd had an earlier, momentary flirtation, and put on a beeline to childbirth and subsequently Michigan. As an expectant mom, Perkins was emotional but never shrill, anxious but still predictably sort of cute. All in all, her final story line was probably her least engaging. I wouldn't say that's through any particular fault of Jones'. I've always been a fan of the way she internalized Perkins' insecurities and reflected nervous optimism even during the leanest of times, scriptwise or otherwise. Her character's lackluster last season is emblematic of a show that, while beloved, seems unavoidably on the decline. All the believable romantic landings have been stuck (Leslie and Ben, Andy and April), all the best friendships have been sealed and reaffirmed time and time again (Leslie and Ron, Tom and Donna), and all the silliest names have been given out to guests and recurring oddballs (Shauna Malwae-Tweep, Councilman Jamm).

It's not like the inhabitants of Pawnee can't still get a laugh -- I folded over when Ron Swanson (Nick Offerman) recently referred to his new iPod as a "rectangle" with music on it. It's just that the show seems to be treading familiar water now and even the characters know it. Every conceivable permutation of Leslie's local political career -- a founding pillar of the narrative -- has been explored, and none-too-subtle allusions to her moving on are starting to pop up. ("Parks and Rec" isn't "Soap," so we're unlikely to see Leslie Knope moving into the governor's mansion, but that doesn't mean the show isn't winding down.)

Thursday night's episode ends in a predictably heartfelt way, with all of the characters saying mostly tearful goodbyes to Ann and Chris. Though only those two are leaving at the moment, the last scene feels like a pretty suitable ending for the entire series. As such, it would be somewhat subdued, but that's not necessarily a bad thing. I have watched "Parks and Recreation" since the first episode. I have been a die-hard viewer since the show really hit its stride in Season 2 and have been loyal ever since. I hold out hope that the program can go out on a truly high note, but believe it's earned the right not to have to try too hard.