"He got people singing": Remembering Pete Seeger with my dad

Seeger's music and politics were about elevating the collective over the individual, a spirit too often lost today 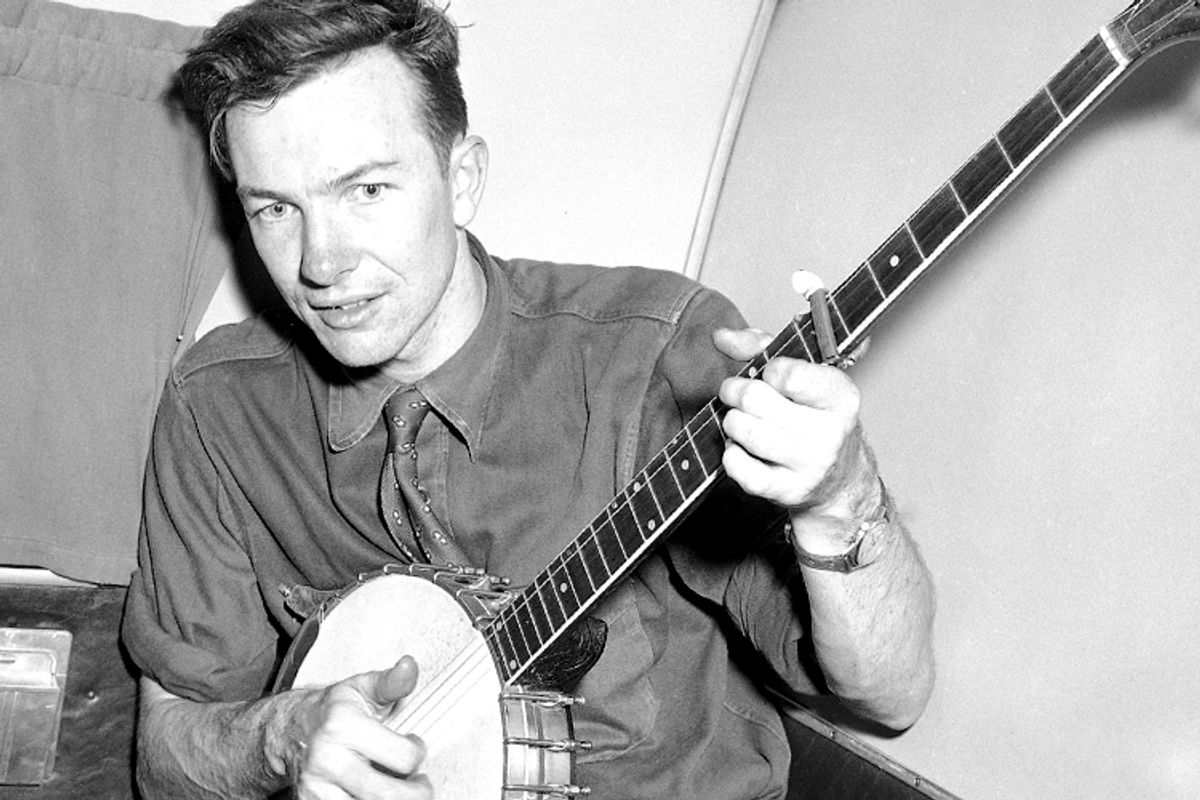 I didn’t know the name Pete Seeger.  I didn’t know where the songs came from.  What I knew was my dad and his acoustic guitar and all of us singing along.

It wasn’t until I was much older that I began to understand the politics behind those simple verses, and it was many more years before I adopted Seeger’s political leanings as my own.  But now that I know something about the man who wrote and sang the folk music of my childhood, I don’t think he would mind that the image that comes to my mind when I think of Pete Seeger is not a tall, skinny white man with a banjo, but a 30-something Chinese-American man surrounded by four kids.

Pete Seeger’s music, like his politics, elevated the collective over the individual.  He never gave a concert that wasn’t a sing-along.  As my dad told me, when I called to discuss the news of Pete Seeger’s death at 94, “He got people singing.”

After I found out that Pete Seeger had died, I took a bus through San Francisco to the Staples at the corner of Van Ness and Sacramento.  Dozens of members of the American Postal Workers Union were gathered to protest the U.S. Postal Service’s decision to open postal counters in the office supply stores, staffed by non-postal workers.  The union members waved signs reading, “Stop Staples: The US Mail is Not for Sale” and chanted, “Hey hey hey, ho ho ho, Postal Staples got to go.”

As the morning progressed, contingents from other unions – healthcare workers, nurses, teachers and others – arrived to join the picket.  “Hey hey hey, ho ho ho, Postal Staples got to go.”  Thanks to simple words and a simple rhythm, the new arrivals quickly added their voices.

I had been planning to attend the protest to interview postal workers about what the APWU believes is a step toward privatization, but I ended up asking for stories about Pete Seeger.

Jamie Horwitz, a longtime staffer of the American Federation of Teachers who was in town to help the APWU with media outreach, told me that Seeger used to go to the National Labor College each year to meet with rank-and-file musicians from different unions.  Pete would ask about what issues the workers were facing.  The union members would share songs they’d been writing or singing.

Rodger Scott, an English teacher at City College of San Francisco since 1972 and member of AFT Local 2121, recalled going to see Seeger perform at the Longshoremen’s Hall in San Francisco in the spring of 1963.  “The room was overflowing,” he told me.  “We were in line outside and we couldn’t get in, so I asked the security guard if he could go tell Pete Seeger that it wasn’t very comradely not to let us in, and to ask if we could come sit on the floor.  So the security guard went inside and told Pete, and they let us inside to see the concert.”

David Welsh, a retired letter carrier and musician, had met Pete Seeger at the Great Labor Arts Exchange in the '80s, and taught him a song he wrote, “Rockin’ Solidarity.”  Seeger went on to promote and perform the song. “There was something about him,” David said.  “It wasn’t so much his voice, but his presence, that drew people to him with his sincerity and his love for the movement.”

Pam Tau Lee, a longtime union organizer and activist, spoke about singing Pete Seeger protest songs when she traveled through the South with workers affected by NAFTA: “Those songs brought together the movement.  Those songs brought together the Chinese from California and the Latinos from Mexico and the African-Americans from the South – the hearts and minds and desires of people wanting to stand together and bring justice to each other.  The words just have a humanity about them, in those spaces where you’re singing together, men and women and old and young.  It makes you just feel it in your bones.”

The action ended with protesters gathered together on the sidewalk, shouting, “We’ll be back! We’ll be back!” to the store whose windows bore “Now Hiring” signs.  According to Omar Gonzalez, western region coordinator for APWU, USPS has cut 137,000 jobs over the last four years.  Postal clerks in participating Staples stores will not be union members.

I interrupted my Pete Seeger listening session last night to watch President Obama’s State of the Union address.  Although he spoke about economic inequality, jobs, raising the minimum wage, healthcare, retirement security, and the wage gap between men and women, Obama never mentioned unions.  He spoke of decent work for all Americans as a goal that could be achieved through legislation, executive orders and the benevolence of the bosses – not something that can be fought for and won by workers uniting and engaging in collective bargaining.

The speech concluded with an emotional tribute to Cory Remsburg, an Army Ranger who was severely wounded during his 10th deployment in Afghanistan.  Obama raised up Sgt. First Class Remsburg as an exemplar of hard work and perseverance.  He did not mention whether Remsburg would have faced an 11th deployment if he hadn’t collided with a roadside bomb.  He did not mention the 349 active duty soldiers and 6,000 veterans who committed suicide in 2012.  He didn’t mention the immorality of war.