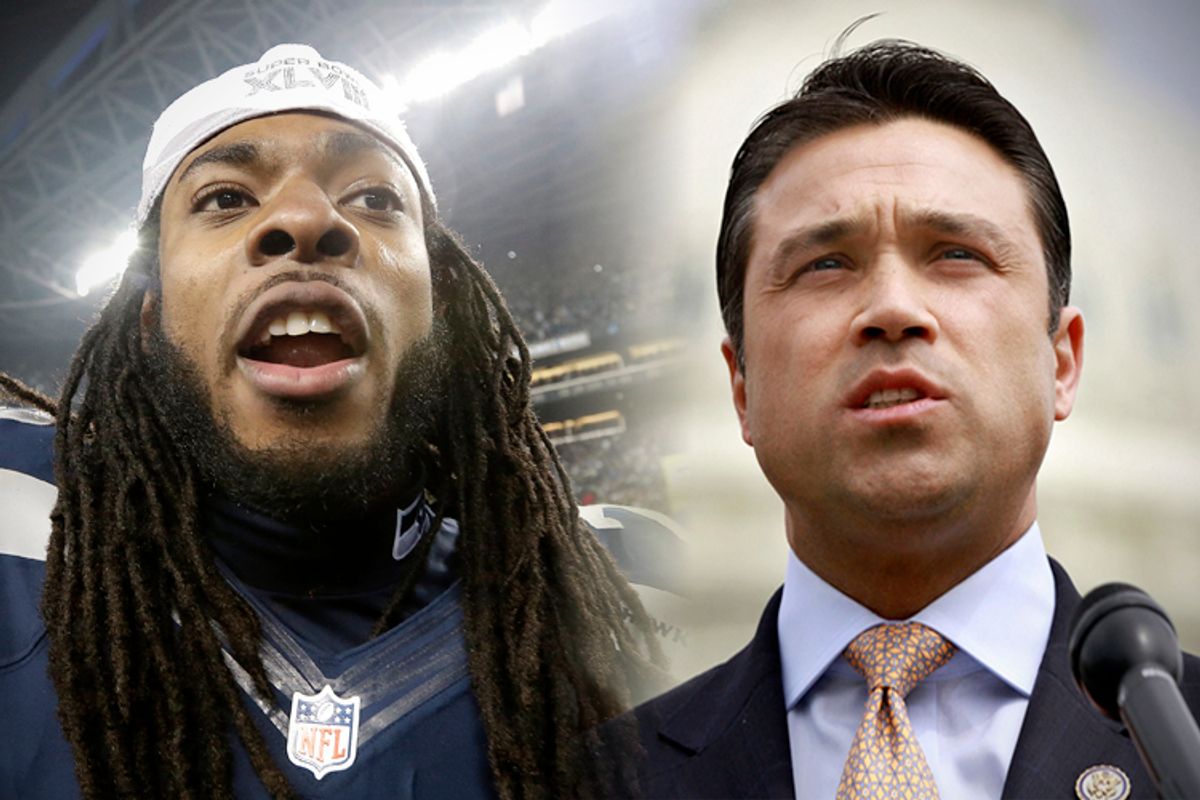 I have to correct a mistake in my State of the Union coverage from Tuesday night: I said there were four separate Republican replies, but in fact there were five. And by far the most widely seen GOP SOTU rebuttal came from New York Rep. Michael Grimm.

By now you know the story: Interviewed by NY1 reporter Mike Scotto, Grimm called the president’s speech “divisive.” But when Scotto went on to try to ask Grimm about his own myriad legal and ethical troubles, well, Grimm threatened to divide Scotto, literally, as in “I’ll break you in half like a little boy.”

As they stood along a railing in the Capitol, Grimm blasted Scotto for not sticking to SOTU questions. “If you ever do that to me again, I’ll throw you off the fucking balcony.” When Scotto defended asking Grimm about a campaign finance probe, the congressman, presumably thinking the camera was off, went on: “No, no, you’re not man enough … I’ll break you in half like a little boy.”

There’s so much awful about the Grimm video, especially the macho posturing and the vaguely sexual menace as he threatens to harm the clearly rattled Scotto, who stands just over 5 feet tall. I have to confess, as I watched the disturbing confrontation, that I immediately thought about two people: Seattle Seahawks cornerback Richard Sherman, and New Jersey Gov. Chris Christie.

Because he verbally, not physically, roughed up San Francisco 49er Michael Crabtree after the NFC championship game 10 days ago, Sherman was globally denounced as a “thug” and worse, as ugly racial stereotypes and flat-out projection defined the talented scholar from tough Compton by way of Stanford University as a criminal. Stand Grimm and Sherman side by side, there is only one “thug,” and it’s the GOP congressman.

It’s hard not to compare the video of Grimm’s macho menace with the YouTube-immortalized serial bullying of New Jersey Gov. Chris Christie. That’s not entirely fair, since Grimm represents Brooklyn and Staten Island, not Jersey. But as someone who was born in Brooklyn and spent my childhood on Long Island, I recognize this brand of Northeastern Republican – the blue-state bully who trades on the Democratic Party’s cultural association with women and minorities, and competes with a macho swagger. Swept into office in the Tea Party wave of 2010, the New York Times describes Grimm as “an avid weight lifter who earned the nickname Mikey Suits for his often flashy style.”

These types, sadly, are often adept at the worst kind of crony politics, if not corruption, as we see in the unfolding Christie scandals.

To be fair, Grimm is more directly tarnished by scandal than the New Jersey governor is, so far. The FBI recently arrested one of Grimm’s fundraisers for campaign finance improprieties, and is looking into charges that Grimm illegally courted foreign donors. The business partner who helped the former Marine and FBI agent start a restaurant and enter politics has been tied to the Gambino crime family. Another major donor, an Orthodox rabbi whose followers gave hundreds of thousands of dollars, pleaded guilty to visa fraud.

Apart from charges of campaign finance and business wrongdoing, Grimm has been criticized for overall boorish behavior. In September Brooklyn magazine reported that he spent the Friday before the government shutdown boozing at a Bay Ridge bar where he got attention for getting handsy with his female companion before the two disappeared into a bathroom stall for an extended period. ”I was surprised someone so sleazy could be a congressman,” one witness told the magazine.

In an earlier bar altercation in 1999, Grimm scuffled with a fellow patron, threatened him with a gun, then told police he'd been assaulted. When he returned to the bar with cops to search for the Caribbean man with whom he'd scuffled, he reportedly said, "All the white people get out of here.”

Not surprisingly, Grimm has enjoyed the strong backing of another local GOP bully, Rudy Giuliani. “Don’t be fooled by the shameful attacks in the media,” the former mayor said in one campaign ad. “Michael Grimm’s character and integrity are second to none.”

That might be true, on a scale of character measuring corruption and bad behavior.

There’s been widespread coverage of Grimm’s behavior, but the reaction hasn’t come close to the dehumanizing stereotyping that greeted Richard Sherman. But give it time: Sherman handled the controversy with intellect, humility and humor; Grimm first refused to apologize, then reversed himself, but he still won’t answer questions about the campaign finance probes he faces. I predict Grimm's troubles will only get worse, as reporters dog him for replies.

But for now, let me just say: On behalf of white working-class New Yorkers, I’d like to apologize for Michael Grimm. We're not all thugs. Really.

Update: Another Northeastern Republican who can be a bit of a bully himself, Long Island's Peter King, just defended Grimm to BuzzFeed. “I’ve fought with reporters myself, it’s a contact sport. If you can’t take it, get out,” he said.