As a new report finds him looking at '16 general election, he loses a top promoter and polls show him fading fast 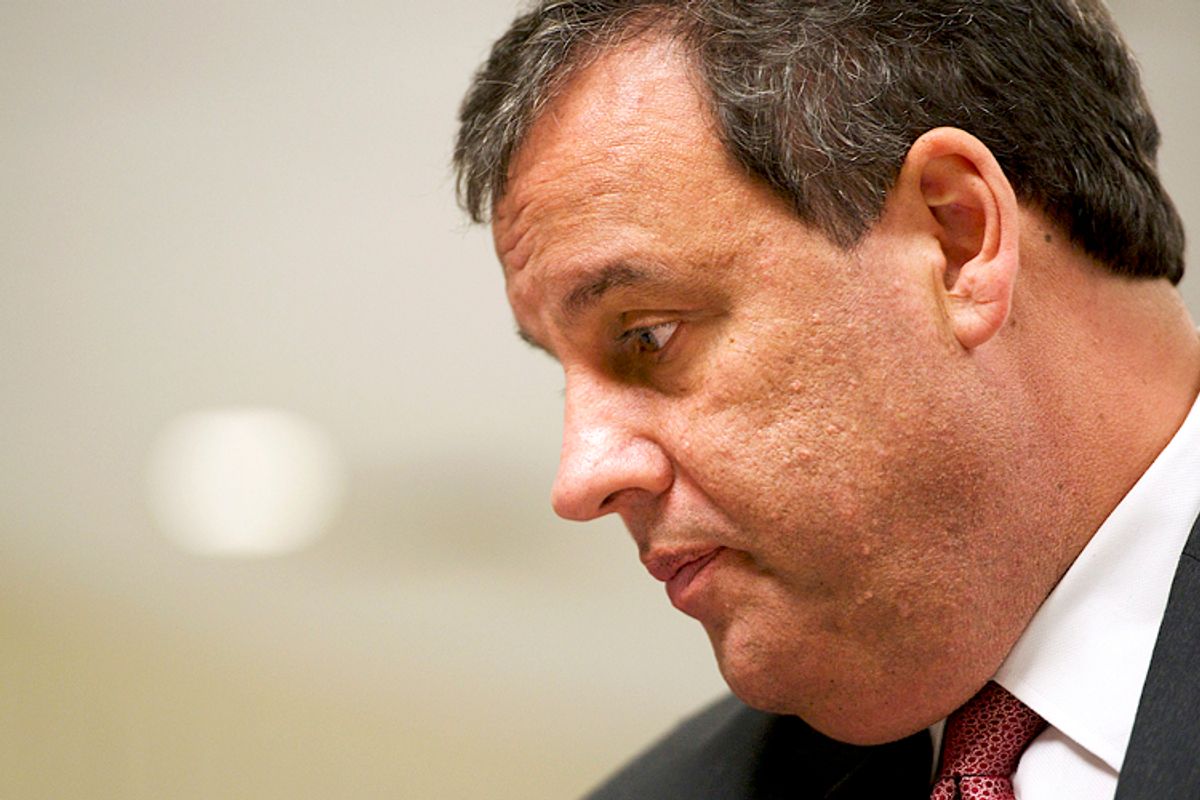 New Jersey Gov. Chris Christie is sinking fast. Yet another national poll finds that his 2016 hopes are fading, as he falls from first to third place among likely GOP presidential contenders in the latest Washington Post/ABC News poll, and 12 points behind Hillary Clinton. Like earlier polls, this one finds that Christie is losing his best attribute for 2016: his wide appeal with Democrats and independents.

Now comes another blow: He’s lost the Ron Fournier primary. A year ago the centrist National Journal reporter, long a Christie promoter, wrote that “the smartest man in politics may be Chris Christie." Today he writes: “I take it back,” in a piece headlined "Why I Was Wrong About Chris Christie." While taking no stand on Christie’s direct culpability in the scandals erupting around him, Fournier says they show that “Christie ran a hyper-political governor's office that focused relentlessly on a big re-election win to position him for a 2016 presidential race.”

Fournier comes a little late to that news, but he’s got a lot of company: If you didn’t believe Christie was trying to run up the score in his 2013 reelection campaign you weren’t paying attention. Why else would he spend millions of taxpayer dollars to hold a special election for senator, won by Democrat Cory Booker, in October, rather than Election Day in November, except to ensure himself a lopsided if low-turnout victory?

But the extent to which Christie and his team went to run up his reelection numbers, especially among Democrats, is pretty amazing, as detailed by a gripping New York Times piece, “For Christie, politics team kept the focus on two races” – his 2013 reelection, and the 2016 presidential race. Fascinatingly, in this telling, at least, Christie’s group was hugely focused on the 2016 general election, with a statewide strategy that focused on towns it termed “mini-Ohios” and “mini-Floridas,” swing districts often led by Democrats. The piece also details the effort the team made to woo Democratic mayors, brazenly coordinating state aid and development decisions with pitches for Christie endorsements.

The portrait that emerges is one of a supremely confident team that didn’t give a damn about the GOP primary, which is dominated by hard-line conservatives skeptical of Christie, and was looking straight past Iowa and South Carolina to Ohio and Florida.

Now Christie has to look back, at the statehouse in Trenton. While the Times piece breaks no direct new ground on the existing Christie scandals, it depicts the governor running an extremely tight ship, in which politics and policy were always intertwined. It shows Christie micromanaging his political and policy staff, overseeing appointments to bodies as obscure as the State Board of Physical Therapy Examiners. His top lieutenant, chief of staff turned campaign manager Bill Stepien, kept Christie informed about progress in the “top 100” cities and towns they’d targeted to run up the score, particularly with Democrats, in his November 2013 reelection.

Stepien, who stepped down after his role in the George Washington Bridge scandal was revealed, was also widely perceived as speaking for the governor. “If ‘Step’ were to bark an order at somebody, the assumption would be — unless otherwise stated — that it was coming from the governor,” a veteran Republican consultant told the Times. “There is no getting around that.” The article makes it even harder to believe – it was never easy – that Christie knew nothing about what Stepien, Bridget Anne Kelly and David Wildstein were up to in Fort Lee.

Meanwhile, another New York Times piece adds depth and detail to Hoboken Mayor Dawn Zimmer’s charge that Christie tied Hurricane Sandy aid for the flood-ravaged city to her approving a massive development by the Rockefeller Group – which was represented by Christie’s pick for Port Authority chair David Samson. The Times obtained emails showing the extent to which state officials prioritized the Rockefeller development over flood aid.

After spring rains put much of Hoboken under water again, Zimmer attended a meeting she thought was to discuss aid to deal with her city’s ongoing flood problems. But in addition to officials from the New Jersey Department of Environment Protection, the meeting included representatives of the Rockefeller Group as well as Christie state development officials, and moving ahead with the Rockefeller project was the top agenda item. It was a few days later that Zimmer says Lt. Gov. Kim Guadagno told her more Sandy aid was conditioned on the development-skeptical mayor approving the Rockefeller Group’s plans.

Taken together, the two Times pieces show the extent to which Christie prioritized his own political career and developers’ interests above the pressing needs of New Jersey residents. He's lost the Ron Fournier primary, which means he's being abandoned by his real national constituency: Beltway pundits.  It’s only a matter of time before Christie has to give up his post as head of the Republican Governors’ Association and tend to the business of keeping his office.