Yes, Miley dirty-danced with Madonna. But the big shock of her concert special was her genuine talent 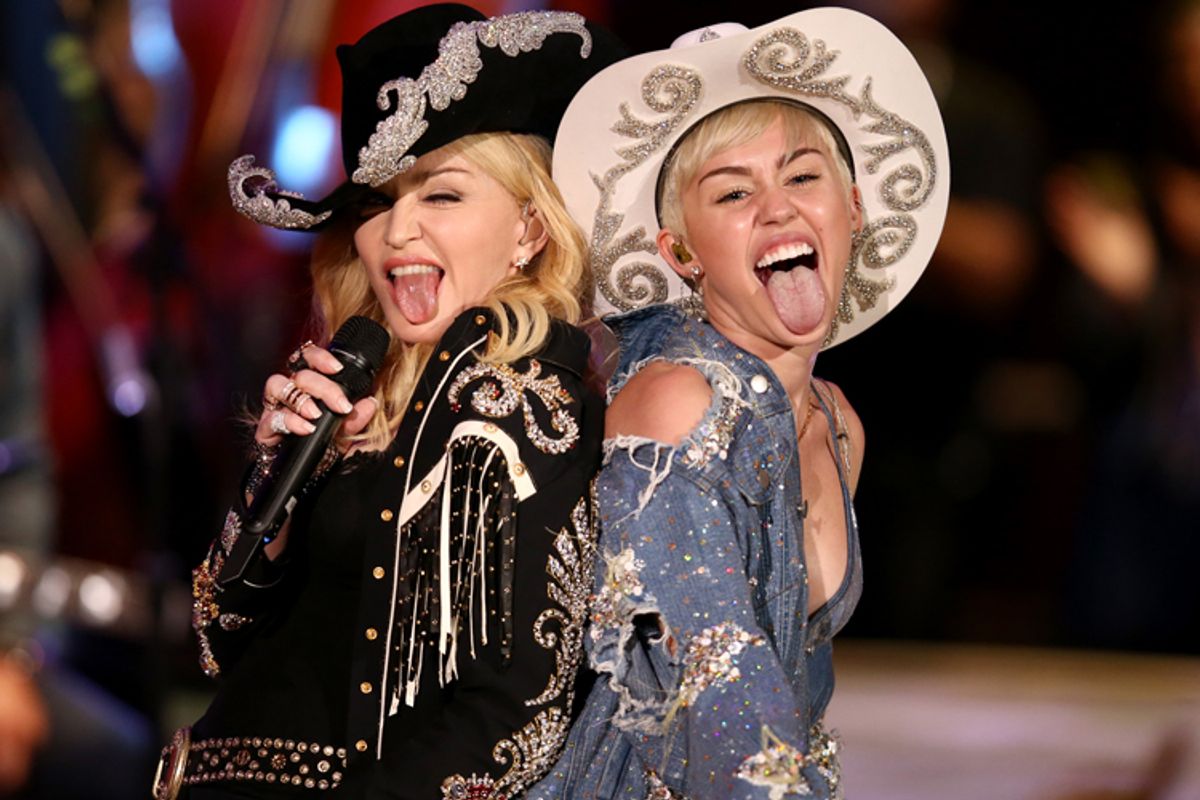 Miley Cyrus was 2013's queen of publicity stunts -- in a pop landscape that has consistently rewarded the artist who most imaginatively trolled the audience, Cyrus grabbed attention last August with her news-cycle-dominating twerking at an MTV awards show and refused to let go. After some five months of giving vastly more than the audience can reasonably expect, Cyrus showed up on MTV's "Unplugged" last night with a few more tricks. The slightly surprising thing the acoustic concert proved is that she doesn't really need them.

"Unplugged" has historically been home to performances in which the performer's true self comes out, devoid of the gimmicks that might frame, say, an awards-show performance; the franchise produced two Grammy albums of the year by aging legends (Tony Bennett and Eric Clapton), one set that made Nirvana's legend, and another that ruined Lauryn Hill's. Cyrus used her hour of airtime to frame herself as a person with an odd but benign sense of humor that complements, rather than detracts from, her voice.

Cyrus began her performance in a faux-"Hee Haw" getup, complete with blond bob wig and plush horse galloping around the stage; she was 100 percent covered up, though when she changed, later in the show, into a bikini top, she made her reputation for public semi-nudity into a little joke. "You can look at life one way or the other -- half-naked or half-clothed." Even her hillbilly drag couldn't possibly be construed as offensive; she phrased it as a tribute to Nashville and followed it up with a note-perfect cover of Dolly Parton's "Jolene."

That's the thing -- Cyrus showed off a vocal talent that anyone who'd bothered to listen to her album would have already known about, with as few distractions as she's likely to throw out. She was in strong voice at the Video Music Awards and American Music Awards last year, too, but got headlines, instead, for her outfits (a flesh-toned and a cat-print bikini, respectively).

The takeaway for anyone drawn to a Miley Cyrus TV special on the basis of endless media coverage is that Cyrus is actually talented and has a full complement of good songs from her recent album "Bangerz" -- and, given that her wardrobe is no longer in any way remarkable, it's the last shock she had in her arsenal. The concert seemed to show that she'd learned, too, from the truly nasty elements of her past performances -- black performers onstage were treated as legitimate backup singers and part of the act, rather than objects for Cyrus to slap and objectify. Reducing the fripperies onstage by a small percentage allowed Cyrus to reach far less for outrage. The whole thing was a surprise, but not a troll.

It's been easy to forget Cyrus' genuine musical talent throughout her career -- not that Cyrus herself has seemed to mind. From her start as Disney Channel sensation Hannah Montana, when her fame was bound up in a materialistic fervor of merchandising deals, to later reinventions (Cyrus has, now, released two albums celebrating her transition into sexualized adulthood), it's never just been about the music -- if it were, Cyrus would be far less able to get an audience for the music.

A perfect symbol of the paradox in which Cyrus finds herself came at the end of the show, as the young pop singer was joined by the person who set the standard for contemporary pop stardom and a perfect negative example. Cyrus and Madonna duetted on a mashup of the latter's 2000 hit "Don't Tell Me" and the former's "We Can't Stop." Cyrus sounded terrific; Madonna sounded, fans must concede, less terrific, and -- though these things are subjective -- seemed to as usual be going through the motions. (She'd previously done stunt-y live performances with Britney Spears, Christina Aguilera, M.I.A., and Nicki Minaj, and even when kissing Spears, never seemed to actually be engaging with the younger talents.) Cyrus was goofily singing a recent hit of hers. Madonna was engaging in a publicity stunt. Only one of them seemed to be having fun at all. Miley Cyrus may be stuck in an ecosystem in which the biggest and most openly trollish gambits for attention can succeed. But her special proved that there are far worse fates than setting out to get attention by doing what comes naturally and doing it well.