Want to bend the fabric of space and time? There's an app for that

Mainstream scientists scoff at paranormal research. But what might happen if we mobilize the smartphone hive mind? 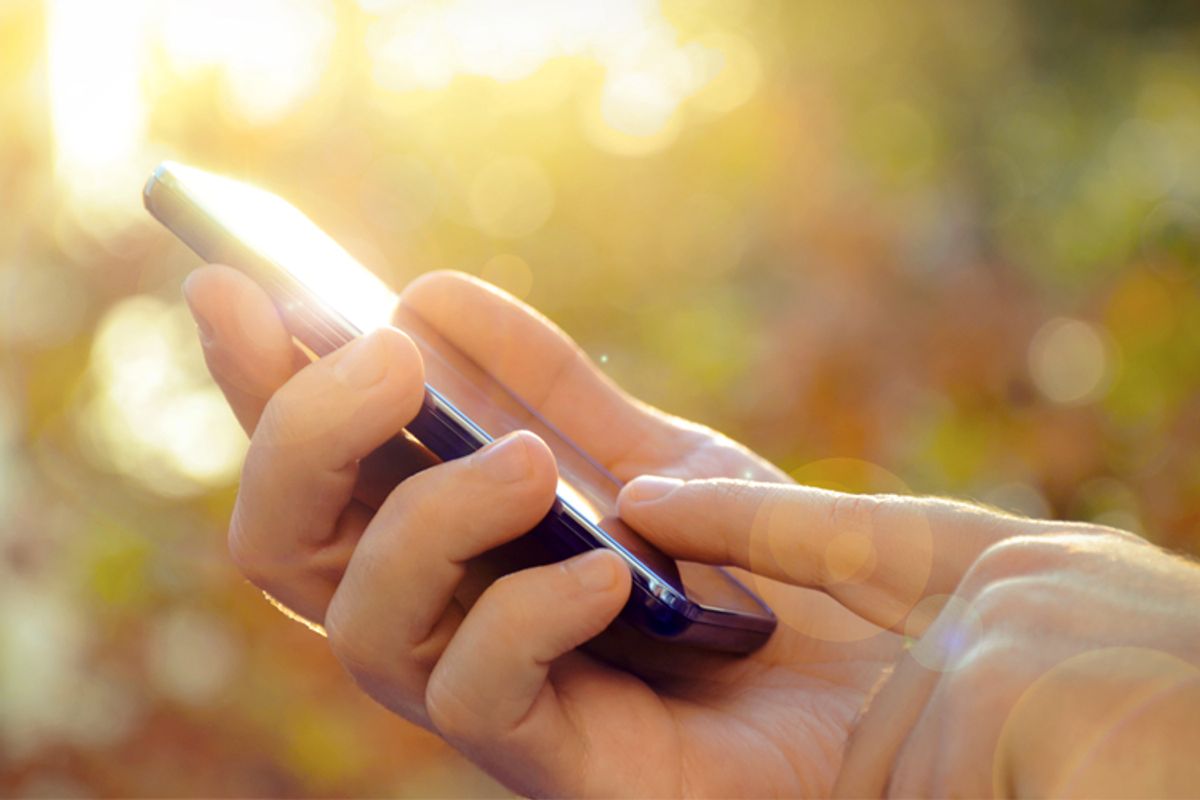 It doesn't take much to set off my bullshit meter. But here's a guaranteed strategy for success: Send me an email with the title "Biggest Story of our Time, Really."

Brassiness like that deserves a special award for chutzpah. I had to read on.

[T]ech prodigy Adam Michael Curry just unveiled a radical new technology that can interact directly with human consciousness. This is perhaps the most important science/technology story of our time with enormous implications for all of humanity.... This has the potential to transform every aspect of human life and industry, everything from medicine to how we communicate, and most importantly, how we relate to each other and the universe... after years of studying human consciousness in the engineering lab at Princeton, Adam is unveiling a radical new Mind-Matter Interaction Technology. His first product, the Collective Consciousness App, is a free app that allows users to affect their phones using only their thoughts and intentions. This is based on decades of rigorous laboratory testing.

My first impulse when reading an email as over-the-top as this is to just delete it. But one sentence did catch my eye: "Working with Adam are respected folks like Robert Jahn, the Dean of Princeton's School of Engineering ..."

Say what? Surely that couldn't be right. On a whim, I decided to send Jahn an email asking him if he was indeed working with Curry. You never know -- an outraged or humorous response from an Ivy League academic might make for an amusing post.

Yes, well, its unthinking decisions like that which usually end up causing Hellmouth-size disasters in the Buffyverse or Fringe. Next stop: The paranormal express!

Because after clicking send, I did some Googling. (Yes, I know, possibly it should have been the other way around.) As it turns out, Robert Jahn was indeed at one point the dean of Princeton's School of Engineering. But he stepped down in 1986. His more recent claim to fame was his three-decade tenure running an outfit called the Princeton Engineering Anomalies Research program. Located on the Princeton campus, but primarily funded from private sources, PEAR dedicated itself to "rigorous laboratory" testing of what most people would call the "paranormal" but which the lab itself described as "a comprehensive agenda of experiments and developing complementary theoretical models to enable better understanding of the role of consciousness in the establishment of physical reality.”

A New York Times article on the closing of the lab in 2007 (Jahn is now 83 years old) reported that "the laboratory has long had a strained relationship with the university. "

Jahn and his lab director Brenda Dunne co-authored scores of papers reporting startling research. Perhaps the most famous finding:  Test subjects had been able to alter the production of random numbers generated by machines simply by thinking concepts like "high" and "low." Basically, they were reportedly able to make the numbers slightly less random.

But the mainstream scientific world looked askance. From the Times:

This kind of talk fascinated the public and attracted the curiosity of dozens of students, at Princeton and elsewhere. But it left most scientists cold. A physics Ph.D. and an electrical engineer joined Dr. Jahn’s project, but none of the university’s 700 or so professors did. Prominent research journals declined to accept papers from PEAR. One editor famously told Dr. Jahn that he would consider a paper “if you can telepathically communicate it to me.”

After my cursory research, I felt that my initial skepticism had been confirmed, and I had just about made up my mind not to waste time debunking an overwrought email.

But then my phone rang. It was Brenda Dunne, Robert Jahn's longtime collaborator! She had been asked to call me by Dr. Jahn. And while she characterized the description of Adam Curry's app as the "biggest story of our time" as possibly "overstating" the case, she did confirm that Jahn had advised Curry on his research. Indeed, she noted, the Collective Consciousness app is basically a way to replicate PEAR's experiments in the mobile environment. Each smartphone running the Collective Consciousness app would becomes its own random number generator, somehow amenable to our conscious manipulation. (Not quite as sexy as affecting our phones using only thoughts and attentions, but still kind of a big deal, if replicable.)

It was a bizarre experience, having just spent 20 minutes reading up on PEAR, to have Dunne recapitulate what I had just learned in real time. I felt like decades of struggle on the part of PEAR to be taken seriously was being recapitulated in our brief conversation. She was earnest and forthright. She acknowledged that PEAR's research into the ability of people to "affect random processes with their minds" had never received "formal endorsement from the mainstream." But she expressed hope that Curry's app might do the trick. There would be "important implications" if our collective manipulation of random numbers through smartphones proved that our "minds could affect reality."

Well yes, I have to confess that I completely agree with her premise. There would be important implications. Indeed, the emerging story was actually beginning to sound to me like a plot for a riveting science fiction novel. A Princeton lab's research into the paranormal is ignored and belittled by mainstream science. Funding dries up, the researchers retire, and the whole project gathers dust and is forgotten. But then a clever lad comes along who is able to translate the core research experiment into a smartphone app that goes viral, and suddenly, instead of a few test subjects concentrating their mental powers upon a few toaster-size machines in New Jersey, an international hive mind of millions of interconnected mobile phone users starts messing with the quantum structure of the universe.

Critical mass, achieved. The singularity, nigh! The biggest story of all time! Really.

Now I was beginning to feel obsessed. And having reached consensus with my colleagues that this tale of mind-altering-reality research translated into the mobile phone age was inherently interesting I started writing it down. After all, noted one fellow science-fiction devotee, lots of people already seem to be treating smartphones as semi-religious or magical objects, and most of us really don't know how or why they work. Who is to say that a Collective Consciousness app wouldn't become a popular tool for concentrating our mental good will? I've sat, bemused, in rooms in Marin County where hundreds of well-meaning people attempted to spread well-being throughout the universe via Buddhist meditation. It was certainly not a stretch to imagine them using their phones for the same purpose. I started to get to work.

And then my phone rang again.This time, it was the man himself, Adam Curry! Brenda Dunne had apparently called to alert him to my inquiries.

He was immediately apologetic.

"I am a little blown away at how much hype was in that email," he said, stressing that he would not have used such language to characterize his own work. He was merely trying to find a new way to "explore" the implications of the research conducted at PEAR.

I asked him if it was fair to say that mainstream science did not treat those research findings as valid. He demurred: a better way to describe the mainstream's stance was that they had just "ignored" the research.

We talked for a little while about the theory that human thought could affect a random number generator by making the numbers a little less random. He acknowledged that no one has any clue as to what the "mechanism" is for this feat. If it is happening, not even Curry would speculate why or how. But he suggested that in theory, expanding the number of people who were concentrating their efforts on bending reality could possibly increase the overall impact.

We talked for about 10 minutes. Throughout, Adam Curry sounded like a very sensible young man, except maybe for the fact that he believes we can use our minds to bend the fabric of the space-time continuum. And he has an app for that.

Or he will soon. If all goes according to plan, he thinks he needs about six months more of development time before he has something that you find on the App Store. If you're interested, you can help. If you'd like to learn more about the Collective Consciousness app or contribute to the Indiegogo campaign funding its development, head on over to Consciousness-App.com, and keep the dream of the Princeton Engineering Anomalies Research program alive.