Down with "host cities"!: My plan to build a giant sports arena somewhere in the desert

The people of Jersey and Sochi have suffered enough. Let's find permanent homes for our oversize sporting events 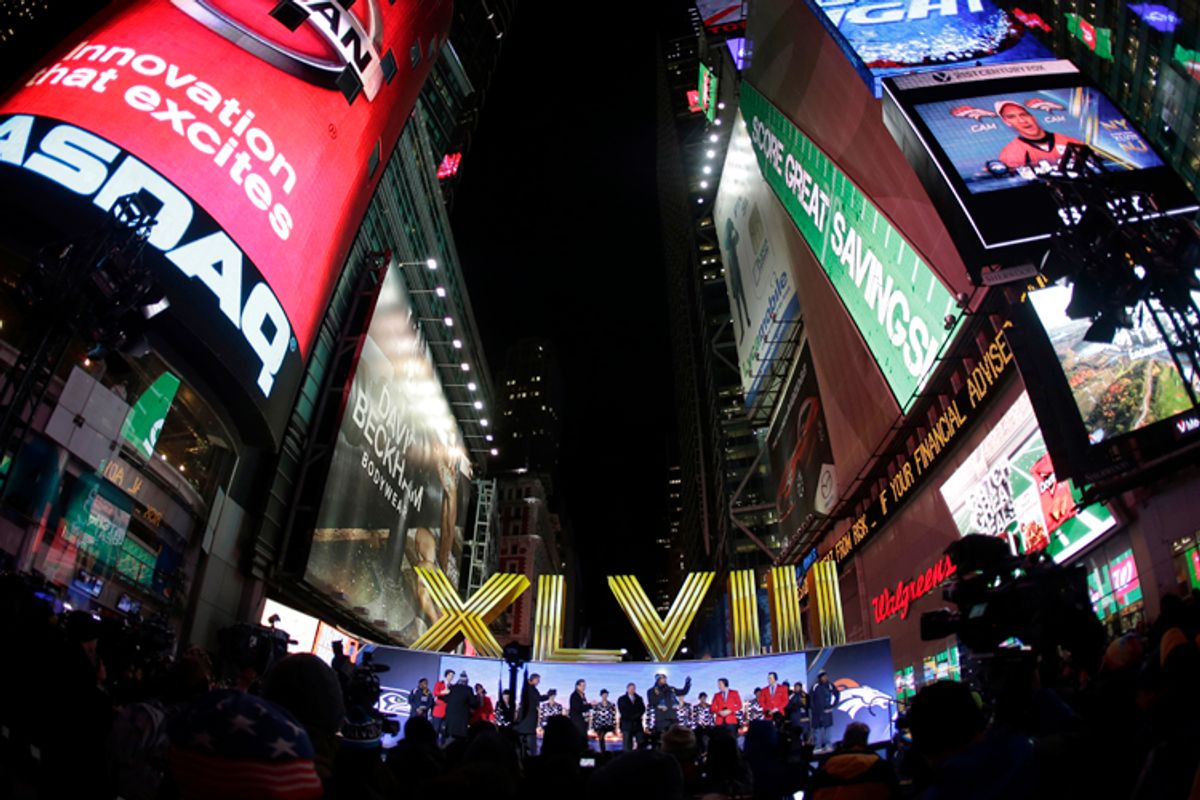 East Rutherford and its neighboring towns were promised NFL-sanctioned events with big sponsors. For the most part, they're getting nothing. The league withheld its official sanction from a number of towns' planned celebrations, and without that sanction, there aren't official NFL sponsors. And if you aren't sanctioned, don't you dare try to advertise the fact that the Super Bowl is happening nearby:

In Montclair, NFL lawyers forbade the town from using XLVIII in its logo. The town ended up converting its plans for a blowout party into a winter festival, featuring local bands and a bar crawl.

The ultimate insult came when the NFL started looking for space to set up a temporary retail shop in Montclair and asked the town to provide it gratis.

So, this year, New Jersey does the dirty work of "being the place where the game is" while New York City reaps all the supposed benefits of being the big game's "host city." But don't envy New York! The city's not going to get much out of the arrangement either, economically speaking.

The selling point for the Super Bowl host city is, as with all great pro sports hustles, a supposed economic boost. Hundreds of thousands of free-spending tourists will descend on the site of the Super Bowl and flood the place with out-of-town cash. That certainly sounds nice, especially in tourism-light late January/early February. But, as always, the promises rely on heavily massaged numbers. It's more likely that host cities see a negative rate of return, considering the cost of hosting and the other uses that money could've been put to.

The NFL, for its part, does everything in its power to ensure that Super Bowl tourists don't keep their money in town. The ideal Super Bowl attendee is staying in a hotel owned by a multinational conglomerates (preferably Marriott, an NFL sponsor), buying NFL-branded Nike apparel (from a temporary pop-up retail shop like the one they planned for Montclair, not a local sporting goods store), drinking Pepsi and eating Frito-Lays snacks.

Do you think the NFL wants Super Bowl tourists to eat at Yonah Shimmel's knish bakery or Joe's Shanghai restaurant or some Korean restaurant in Palisades Park? No, they want you to order a pizza from Papa Johns, the official pizza of the NFL. Or go to McDonald's, another official sponsor. Would the NFL like you to try a locally brewed beer? No, they want you to drink something brewed by NFL sponsor Anheuser-Busch. They don't even want you to order your Anheuser-Busch beer at a local watering hole. There is a cruise ship, dubbed the "Bud Light Hotel," docked beside the Intrepid Museum on the West Side, on which I guess people are sitting around drinking crappy light beer all day. Bud Light is the only thing to drink on this boat. This is basically an image of hell.

Here in New York, Broadway from 34th to 47th is shut down for "Super Bowl boulevard," an outdoor promenade of national brands and officially sanctioned NFL fun. Super Bowl visitors, obviously, are encouraged to go there for their Super Bowl experience, effectively funneling tourists out of permanent New York business and institutions and into this temporary NFL wonderland. The league is deeply invested in its branding (and money), and it is much safer to keep visitors where they will only be exposed to brands and activities that the NFL approves of.

That, in fact, is exactly why it's stupid to have the Super Bowl in different cities every year. The NFL wants complete control over every aspect of the Super Bowl experience. It will never achieve this in New York or New Orleans -- it is difficult even in Indianapolis or St.Louis. So here is my proposal, which will allow the NFL to keep its brand unbesmirched by the eccentricities and unsanctioned amusements of American cities while also relieving those cities of the cost and hassle of hosting this ridiculous spectacle.

We (and by "we" I mean "the NFL") should build a giant arena somewhere in the desert outside Vegas, or maybe southern California somewhere, and just make it the permanent home of the Super Bowl. The league can build its little Super Bowl village with its NFL Experience stuff, and keep it up all year, a whole little town dedicated to the majesty of football. All of this crap currently clogging Broadway could have a permanent, lucrative home! It would be a football theme park for most of the year, and then for one week it would be a mecca of stupid, bloated NFL excess. The arena would be state-of-the-art, indoors and climate-controlled, with a zillion luxury boxes and maybe a couple of normal seats for "regular" "fans." Every single aspect of the entire experience could be controlled as minutely as Disney's imagineers control Disneyland. Everyone wins, besides the people attending the game and various players with catastrophic head trauma.

This is also how to fix the Olympics.

Sochi is already a disaster. The games may go off largely without incident, but beautiful (and supposedly protected) natural areas have been destroyed, critics have been silenced, and people have been uprooted. The IOC never should've awarded Sochi the games. All of these problems -- the corruption, graft, waste, environmental destruction, repressive government actions, the threat of terrorism and the draconian security response to that threat -- all of them could've been predicted, when Sochi was selected, by, I don't know, any actual informed observer of Russia under Vladimir Putin.

But rather than relying on informed observers, the IOC relies on fancy presentations and sincere-sounding guarantees from bid committees. Sochi is hosting because the IOC is easily flattered, and Putin is not above cheap flattery. As contemporary news reports explained, Putin flew to the IOC meeting in Guatemala and charmed the members of the committee by speaking English -- "he never speaks English," French IOC member Jean-Claude Killy gushed. According to one report, a notorious heroin kingpin was instrumental in securing the votes of "some Asian countries" (that report is from ABC's Brian Ross, so, grain of salt). Thus, a summer resort town next door to one of the most unstable regions in Eastern Europe won out over South Korea and Austria.

Everyone already assumes the Olympics selection process is corrupt. Sometimes the host nations are ruled by tyrants. All the time, the host cities find themselves spending much more money than they thought they would. The inevitably poor residents of whatever "blighted" neighborhood the Olympic venues are to be built in are inevitably uprooted. After the games, most of the permanent structures spend a couple of decades slowly collapsing. (Have you been out to Montreal's Olympic Stadium recently?)

It makes absolutely no sense to build brand-new Olympic sporting venues in completely different places every four years. Let's just pick two host countries, have them build permanent venues, and let them host all the Olympics. Have the winter games in a county that already has the facilities and infrastructure, like Japan. The summer games could happen in Greece, but Australia might be a safer choice. Permanent Olympic hosts may seem like a proposal that robs poorer countries of the opportunity to host the games, but the Olympics are already biased in favor of rich, northern hemisphere nations in a million ways, and hosting them is more of a burden than a honor.

It is time for sports to stop victimizing our cities. If holding big events in the same place every time is good enough for tennis and golf it's good enough for American football and the Olympics. Please call your congressperson or member of Parliament or whatever you have today.